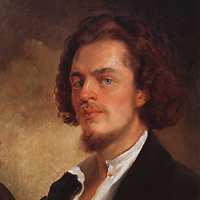 Konstantin Makovsky was born in Moscow, to the family of E. I. Makovsky who was an artist-amateur, collector of art, public figure, one of the founders of Moscow School of painting, sculpture and architecture (MUZhVZ). He was a brother of the artists Alexandra, Vladimir and Nikolay Makovsky. He began to study painting and drawing under his family and under the guidance of V. A. Tropinin. In 1851 Makovsky entered Moscow School of painting, sculpture and architecture (MUZhVZ), studied under the guidance of M. I. Skotti and S. K. Zaryanko. In 1858 he continued his art education at the Imperial Academy of Arts (IAKh) in St. Petersburg; he studied in the class of history painting under A. T. Markov, F. A. Bruni and P. M. Shamshin. In 1861 Makovsky declined the preselected subjects of painting for competitive examination; he was given a permit to choose his own subject for competitive painting. In 1862 Makovsky was awarded gold medal for the painting Agents of the False Dmitry kill the son of Boris Godunov. In 1863 the artist became one of the members of the Revolt of the Fourteen: group of young artists (students of the Academy) declined to participate in the competition for big gold medal. Makovsky left the Imperial Academy of Arts with the title of class artist of the 2nd degree.

In the same year the artist joined St. Petersburg Artel of Artists headed by N. I. Kramskoy; later he left the Artel. In 1867 Makovsky was elected academician of the IAKh for his paintings Seller of Herring, Poor Children and portraits. In 1869 Makovsky was conferred title of academician for his compositions Maslenitsa Festivities at the Admiralty Square in St. Petersburg, Mother’s Instructions, Family Picture, Conversation. In 1870 Makovsky became one of the founders of the Society of Travelling Art Exhibitions (TPKhV); he participated in the exhibitions of the Society in 1874–1875 and in 1883–1884. In 1872 the artist left the TPKhV.

In 1870s Makovsky travelled a lot through Europe; he visited France, Italy, Holland, Germany, Bulgaria, and Serbia. In 1876 the artist made a trip to the Middle East and Egypt.

In 1883 the first personal exhibition of Makovsky was held in St. Petersburg, Moscow and Paris; he became famous in European art circles due to this exhibition. Konstantin Makovsky became popular painter and he had many orders for portraits. His clients were P. M. Tretyakov, D. V. Stasov, A. A. Sidorov, I. E. Tsvetkov, K. T. Soldatenkov, A. G. Kuznetsov, A. V. Orlov-Davydov, V. A. Morozov and many others.

In 1885 the artist was awarded the highest prize at the World exhibition in Antwerp for the painting Boyar’s Bridal Banquet in the 17th Century. In 1889 Makovsky was awarded the Legion of Honour and gold medal for his works Death of Ivan the Terrible, Judgement of Paris, and Tamara and the Demon. In 1890 he became one of the founding members of St. Petersburg Society of Artists.

In 1898 Makovsky became full member of the Imperial Academy of Arts. The artist worked for the magazine Niva (“Field”), where the main artist’s paintings were published. Makovsky together with S. N. Kramskaya wrote and published Artel’s Memoirs.

The painter died tragically in 1915, because of a road accident, after collision of his horse-driven carriage with an electric tram.

Konstantin Makovsky is one of the greatest and the most famous Russian painters of the second half of the 19th century. He acquired complete mastery of technique of painting and composition; he worked in various genres — portrait, landscape, historical painting and decorative pictures. Makovsky was engaged in art research of colour and form than decision of social and psychological problems; due to this works by Makovsky differed from the works by other artists, especially the Itinerants. Makovsky had a reputation of salon painter. His paintings are characterized by detailed depiction of abundant accessories, rich colours and monumentality even in genre paintings. In late period the artist often used variations of popular motifs in his paintings.

Wokrs by Konstantin Makovsky are in many museum collections in Russia and abroad, including the State Tretyakov Gallery, the State Russian Museum in St. Petersburg, and Hillwood Art Museum in USA.