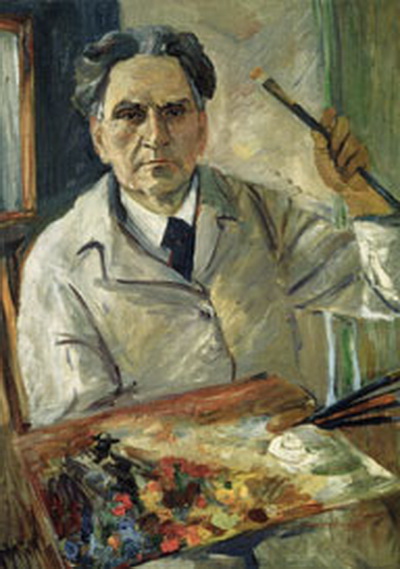 occurred from a peasant family. In 1888-1895 he studied in the Nakhichevan City College, where he received his first drawing lessons under the guidance of AI Bahmuttskogo. In 1896 he took private lessons with AA Artsatpanyana in Nakhichevan. In 1897 he moved to Moscow and entered MUZhViZ, worked in the workshop of Valentin Serov and Konstantin Korovin.

While studying at MUZhViZ made friends with the artistic circle, led by PV Kuznetsov. In 1903 he was awarded two small silver medals and released from the academy with the rank neklassnogo (free), painter. In the summer months, regularly traveled to the North Caucasus and Transcaucasia. Many worked in watercolor technique.

In 1910 he went to Constantinople, in 1911 he traveled to Egypt and Turkey, in 1913 made a trip to Persia. In 1915 he settled in Tiflis, where he married the daughter of a famous Armenian writer Aghayan, Lusik Agayan. In 1918 he returned to New Nakhichevan, in 1921 he moved to Erevan (Yerevan), where he lived until his death.

in 1921 became one of the organizers and the first director of the State Museum of archeology, ethnography and fine arts. In those same years, participated in the establishment of the Yerevan School of Art and Artists' Union of Armenians, was a member of the Committee for the Protection of Antiquities, was appointed adviser for culture in the People's Commissariat of the Armenian SSR.

In 1922, Saryan's paintings were exhibited at the First Russian Art Exhibition in the Van Diemen Gallery in Berlin, 1924-1925 - exhibition of Russian art in New York, in 1925 the artist's works were shown at a retrospective exhibition of the Commonwealth "Blue Rose" in the State Tretyakov Gallery in Moscow, in 1927 they were on display last exhibition "World of Art" Gallery "Bernheim" in Paris. In 1925, Sarian became a member of the association "4 Art. In 1926 he was awarded the title People's Artist of Armenia.

In the late 1920's - 1930's had worked as a theatrical designer. In 1927 he created designs fairy ballet "Zuleyka" in Paris. Collaborated with the Odessa Opera and Ballet ( "Almast" AA Spendiarova, 1930; staging was not performed), the Opera and Ballet. AA Spendiarova in Erivan ( "Brave Nazar" AL Stepanian, 1934; not implemented), the Moscow Musical Theater. Nemirovich-Danchenko, the State Opera Theater. Stanislavsky (The Golden Cockerel "by Rimsky-Korsakov, 1932; not implemented), Rostov dramatic theater. From time to turn to a book graphics, in particular, created the illustrations for the book "Armenian Tales" (several editions), the cover for the collection of poems Isahakyan A. (1929) and "Fairy Tale" Toumanyan (1930).

in 1934 made a creative journey in Turkmenistan. In 1936 in Moscow (Pushkin Museum) and Leningrad (All-Russia Academy of Arts) held solo exhibitions of the artist. In 1937, for the frescoes in the Division of the USSR at the World Exhibition in Paris, was awarded the Grand Prix.

In 1947 he was elected a member of the USSR Academy of Arts.

Sarian - outstanding artist of the first half of the twentieth century. In early works he was about symbolism, and later its artistic attitudes changed, however, he always remained aloof from the mainstream of Russian (Soviet) art. Painting and drawing Saryan, his work, carefully and consistently filled with the spirit of the east, were equally alien to the latest trends - Cubism, Futurism, Suprematism, neo-primitivism, socialist realism. The distinctive features of the works Saryan are free brushwork, very bright, expressive color combinations, emphasizing the form of real life, whether it is barren mountain slopes, the hot streets of the Armenian towns and villages, or the brilliant blue of the southern sky, the apparent "redundancy" of color that unites art with Saryan works of Henri Matisse and Gauguin, PA.

Saryan's works are in many museum and private collections, including the State Tretyakov Gallery, State Russian Museum, Pushkin Museum im. Pushkin, the National Gallery of Armenia.