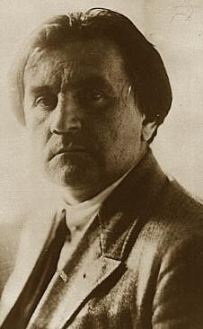 Kazimir Malevich was born to the family of ethnic Poles and was the eldest of nine children. In 1894 he attended the drawing school in Kiev. In 1896 he moved to Kursk with his family and worked as a draftsman in the Railway administration bureau.  In 1904 he moved to Moscow and began his studies at Moscow School of Painting, Sculpture and Architecture (MUZhVZ), spending his summer holidays in Kursk. In 1905 Malevich took lessons at the studio of the painter Fedor Rerberg.

In 1907 Malevich first exhibited his works at the 14th exhibition of Moscow Association of Artists (MTKh). That same year he visited an exhibition in Moscow and saw works of the leading masters of French art (Paul Gauguin, Paul Cézanne, André Derain, Jean Metzinger and others) for the first time.  In 1908 and 1909 he took part in the 15th and 16th exhibitions of MTKh. In 1910 he participated in the first exhibition of the group Bubnovy Valet (“Jack of Diamonds”) and became its permanent member. In 1911 and 1912 he took part in the exhibitions of the Union of Youth; in 1912 he also participated in the exhibition of avant-garde art Osliniy Khvost (“Donkey’s Tail”). Malevich met artist and composer Mikhail Matyushin, who later became one of his closest friends.

In 1913 Malevich entered the Union of Youth and showed his works at the major avant-garde exhibition Mishen (“Target”). The same year he also supplied stage and costume designs for the production of the “first Futurist opera”, entitled Victory over the Sun.  The music for this opera was composed by Matushin, and the main text was written by the poet Aleksei Kruchenykh. The opera was staged at the Luna-park in Moscow and became the manifesto for the First All-Russian Futurist Congress.  In 1914 he left the Union of Youth and took part in the Salon of Independents exhibitions in Paris.

After the outbreak of the First World War, Malevich created a series of agitation posters in lubok style (Russian folk art).  In 1915 Malevic helped to organize the Tramvai V and 0,10 exhibitions in Petrograd, where he showed ten Suprematist works. He also published a tract called From Cubism to Suprematism. The New Realism in Painting.

In 1916 Malevich exhibited his works at a Futurist exhibition called Magazin (“Shop”), which was organized by the artist and architect Vladimir Tatlin in one of the Moscow stores.

In 1918, shortly after the Russian Revolution, Malevich became head of the Free Art Studios.  He also created stage designs for Vladimir Mayakovsky’s play Myster-Bouffe  In 1919 the artist took part in the exhibition Non-Objective Painting and Suprematism in Moscow, where he showed 16 Suprematist works.  He also finished his first major theoretical work On New Systems in Art.  Later in 1919 he came to Vitebsk, where he taught at Vitebsk Institute of Art and Practical trainings, and founded the group and workshop The Champions of the New Art (UNOVIS).

Towards the end of the 1910s Malevich developed an interest in porcelain.  He made designs for the State Porcelain Factory in Petrograd.

In 1922 Malevich worked on a book Suprematism. The World as Non-Objectivity.  He took part in the First Russian Art exhibition in Berlin in the same year.  In 1924 he showed his works at the 14th Venice Biennial.

From 1923 to 1926 Malevich headed the State Institute of Artistic Culture (GINKhUK), and performed analytical research within the framework of that organization.  He created his first three-dimensional spatial models which he called “architectons”. They were built according to the principles of Suprematism and were meant to serve as “the models of new architecture”.  When the GINKHUK was closed down, Malevich was transferred to the State Institute of Art History (GII). In 1927 he travelled to Warsaw and Berlin to show a number of his works at an exhibition. When the show was over, he left his works in Berlin.  He also travelled to Dessau to visit the Bauhaus, where he met Walter Gropius and László Moholy-Nagy.

After returning to Leningrad, Malevich was taken into custody and spent three weeks in jail.  After the release he continued his theoretical studies, delivered lectures at the House of Arts. In 1930 he was put under arrest for the second time, but was soon released.  In 1931 he supplied mural designs for the Red Theatre in Leningrad and in 1932 was put in charge of the experimental laboratory in the Russian Museum. That same year he also took part in the Artists of the RSFSR for 15 years exhibition at the Russian Museum in Leningrad.  In 1935 he participated in the First Exhibition of Leningrad Painters where he showed five portraits executed in 1933 and 1934.

Malevich was buried in the village of Nemchinovka, not far from Moscow.  His fellow artist Nikolai Suetin executed a gravestone in the form of a cube for his tomb.

Malevich is one of the most important artists of the beginning of the 20th century and one of the leading exponents of the Russian avant-garde. In less than ten years after he started painting Realist works in the style of the Itinerants, without having received any systematic training, he came to the abstract Suprematist art (through Impressionism, Fauvism and Futurism).  While he was developing as an artist he worked on his own artistic theories.  He saw Suprematist art as the highest form of creative will.  He dreamed of using his art for discovering the “cosmic language”, establishing the “world order” and “the laws that regulate the whole universe”.  The later works of the artist were influenced by Realism.

Works by Kazimir Malevich can be seen in many museums in Russia and abroad, including the State Tretyakov Gallery and the Pushkin State Museum of Fine Arts in Moscow, the State Russian Museum in St. Petersburg and the Stedelijk Museum in Amsterdam. The latter two boast the largest collections of his art.

Malevich’s works (as well as works by his compatriot Wassily Kandinsky) are considered among the most valued masterpieces of Russian painting on today’s art market.