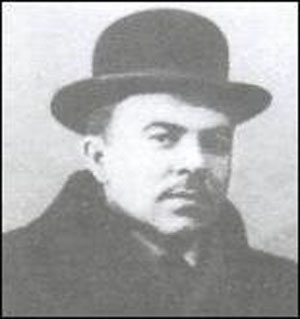 Kuznetsov was born to a family of icon painter. He got his first art education at the workshop of his father. In 1891–1896 he studied at the Drawing School of the Society of Art Lovers under V. V. Konovalov and G. P. Salvini-Barakki. Kuznetsov met V. E. Borisov-Musatov, often visited his studio (that is why Kuznetsov’s early works were painted under the influence of art of Borisov-Musatov). In 1897 Kuznetsov entered Moscow School of painting, sculpture and architecture (MUZhVZ), studied under the guidance of A. E. Arkhipov, N. A. Kasatkin, L. O. Pasternak, then he studied at the workshop of V. A. Serov and K. A. Korovin. Kuznetsov also worked at the private studio of Korovin. Kuznetsov was awarded two small silver medals for pictorial sketches in 1900–1901 and for drawings in 1901–1902.

At MUZhVZ Kuznetsov organized art circle, which was later named Golubaya Roza (“Blue Rose”). Kuznetsov met S. I. Mamontov, V. D. Polenov, and A. Y. Golovin. He often visited Mamontov’s estate in Butyrki and in Abramtsevo, worked at the ceramic workshop, studied majolica technique. With Mamontov’s assistance, Kuznetsov made a trip to the North (in Arkhangelsk, Scandinavia). In 1900 Kuznetsov together with P. S. Utkin and M. S. Saryan traveled along the Volga.

In 1902 Kuznetsov and N. N. Sapunov were engaged in scene design for the opera The Valkyrie by R. Wagner at the Bolshoi theatre. In the same year Kuznetsov together with Utkin and K. S. Petrov-Vodkin painted the interior in the Church of Our Lady of Kazan in Saratov.

In 1904 Kuznetsov graduated from MUZhVZ. He was one of the organizers of the exhibition Scarlet Rose in Saratov in 1904. In 1905 he together with Borisov-Musatov, M. A. Vrubel, and V. V. Kandinsky took part in the 12th exhibition of Moscow Association of Artists, in 1906 — exhibition of the group Mir Iskusstva (“World of Art”) in St. Petersburg. Kuznetsov made a trip to Paris, studied at free workshops and art schools of Montparnasse. He participated in the exhibition of the Russian artists in Paris organized by S. P. Dyagilev. From 1907 till 1917 Kuznetsov was a member of the society Free Aesthetics. In 1907 he exposed his works at the exhibition of symbolism artists Golubaya Roza (“Blue Rose”) in Moscow, later he became one of the leaders of this society.

In 1905–1909 Kuznetsov worked a lot in the field of book and magazine graphic art. He collaborated with the magazines Iskusstvo (“Art”), Zolotoye Runo (“Golden Fleece”). In 1907–1909 he painted decorative picture The Black Swan for the estate of N. P. Ryabushinsky. In late 1900s — early 1910s Kuznetsov together with Utkin, A. T. Matveyev and E. E. Lanceray created decorative design for Y. E. Zhukovsky’s estate Novy Kuchuk-Koy in the Crimea.

From 1907 till 1914 Kuznetsov traveled to the East, in the Kirghiz steppes, Samarkand, Bukhara, and Tashkent. In 1913–1914 he worked on the sketches of decorative pictures for Kazan station in Moscow. In 1914–1915 he worked with A. Y. Tairov at Moscow Chamber Theatre.

After the revolution Kuznetsov headed art section of Moscow municipal council (Mossovet), participated in the agitation decorative design of Moscow to different celebrations in 1917 and in 1918. In 1918 Kuznetsov was elected a member of the Department of Fine Arts of the National commissariat of education (Narkompros). He lectured at the First and the Second State free art workshops. In 1920–1927 he was a professor of the workshop of the monumental art at the Higher State Artistic and Technical Workshops (VKhUTEMAS); from 1927 till 1929 he was a professor of the fresco monumental art department of faculty of painting at the Higher Art Technical Institute (VKhUTEIN).

In 1923 Kuznetsov made a trip to Paris in connection with the organization of his personal exhibition in the gallery Barbazange. In 1925 he was one of the founders-members of the society Four Arts. In 1929 he was awarded the title of the Honoured Art Worker of RSFSR (Russian Soviet Federative Socialist Republic). Two personal exhibitions of Kuznetsov’s works were held in the same year in the State Tretyakov Gallery and in 1931 in the State Museum of Fine Arts. In 1937 at the World Exhibition in Paris he was awarded silver medal for the painting Life of the Kolkhoz. In 1930s–1940s he lectured a lot. In 1939–1941 he worked at the Institute for advanced studies of Arts under Moscow City Executive Committee (Mosgorispolkom); in 1945–1948 he was a professor of painting at Moscow Institute of Industrial Art.

Kuznetsov lived a long life. His creative work went through ups and downs; there were years of brilliant success and years of non-recognition. Kuznetsov was one of the significant representatives of symbolism of Russian art. The flowering of his creative work fell on 1900s–1910s. In 1920s Kuznetsov left symbolism style, but kept the characteristic features of his individual manner of painting: decorative color combined with neo-primitivism subject. Despite the specificity of themes in his late works (e.g. oil industry construction in Baku), it was hardly to refer Kuznetsov’s works to the official Soviet art school.

Works by Pavel Kuznetsov are in many museum collections, including the State Tretyakov Gallery, the State Russian Museum, the Pushkin State Museum of Fine Arts and others.