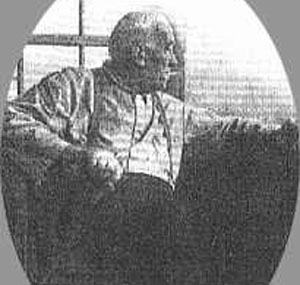 Nikolay Krymov was born to a family of the painter P. A. Krymov.  He studied painting under the guidance of his father. In 1904 Krymov entered the faculty of architecture in Moscow School of painting, sculpture and architecture (MUZhVZ), in 1907 he transferred to the faculty of painting. Krymov studied under the guidance of L. O. Pasternak, A. E. Arkhipov, A. M. Vasnetsov, N. A. Kasatkin, attended the workshops of V. A. Serov and K. A. Korovin.

Krymov became famous in art circles when he was a student. In 1906 he was invited to participate in the exhibition of the Union of Russian Artists (SRKh); later he became its member (1910) and was active participant of all exhibitions of the Union till 1923. In 1907, at the suggestion of Serov, the Council of the State Tretyakov Gallery purchased the sketch Roofs under the snow by Krymov.

Krymov had good relationships with members of the group Golubaya Roza (“Blue Rose”); in 1907 he took part in the only exhibition of the group in the house of M. S. Kuznetsov on Myasnitskaya Street in Moscow. In 1907–1908 he made a trip to the Crimea in order to gather material for creative work. In 1906–1910 the artist worked for Zolotoe Runo (“Golden Fleece”), Vesy (“The Scales”) and Apollon (“Apollo”) magazines.

Since 1910 Krymov was engaged in scene design; he designed several productions in St. Petersburg and in Moscow — in the House of Interludes and in the literary art cabaret Brodyachaya Sobaka (“Stray Dog”). In 1911 the artist created scene and costume design for the performance Pennies from Heaven after the play by A. N. Ostrovsky in the private K. N. Nezlobin’s Theatre (the production was not realized). In the same year he showed his works at the International exhibition in Rome.

Summer months of 1913–1915 the artist lived in the village of Kraskovo near Moscow; from 1916 till 1918 he spent summers in the estate of V. S. Mamontov Gorki in Ryazan province.

After the revolution, Krymov took part in the Commission for Protection of works of art and antiquities of Mossovet (Moscow Soviet of People’s Deputies). Krymov was one of the founders of the magazine Put’ Osvobozhdeniya (“The Way of Liberation”), which was aimed to popularize the art among the soldiers. In 1919–1920 Krymov taught at the faculty of fine arts under Moscow Prechistensky institute of practical trainings, in 1920–1922 — at the Higher State Artistic and Technical Workshops (VKhUTEMAS), in 1920s — at Moscow Polygraphic Institute. In summers from 1920 till 1927 he lived and worked in Savvinskaya sloboda near Zvenigorod; since 1928 he spent summer months in Tarusa.

The artist created scene and costume design for the productions The Cherry Orchard after the play by A. P. Chekhov (1922), The Ardent Heart by A. N. Ostrovsky (1926), Untilovsk by L. M. Leonov (1928), Talents and Admirers by A. N. Ostrovsky (1933) in the Moscow Art Theatre (MKhAT); Cupids in Small Bast Shoes after the play by P. S. Sukhotin (1927) in the Maly Theatre; Wolves and Sheep (1928) and Without a Dowry (1932) by A. N. Ostrovsky in the theatre Comedy (former Theatre of F. I. Korsh). Krymov designed performances for the 4th studio of Moscow Art Theatre (MKhAT) and music studio of K. S. Stanislavsky.

Since mid 1920s Krymov devised method for teaching landscape painting on basis of detection of tone relationships; he published several articles on this subject. In 1934–1939 the artist taught in Moscow Art College in the Memory of the Year 1905.

Krymov was buried in the Novodevichy cemetery in Moscow.

Retrospective exhibitions of the artist were organized in 1967 in the USSR Academy of Arts, in 1984–1985 — in the Central House of Artist in Moscow.

Nikolay Krymov was one of the most significant painters of the first half of the 20th century; during his lifetime works by the artist were recognized as classical landscape. Krymov developed his own recognizable style of painting. He painted his early works as a mature artist. In 1900s he was interested in symbolism, that’s why his early works were characterized by decorative colours, lyricism, changeability of states of nature, of light nuances and air vibration. Later Krymov became interested in primitive art, theatre, classical landscape of the 17th century, impressionism, in particular the works by A. Sisley, E. Degas and C. Monet. In 1910s the artist left painting from nature and began to create his landscapes as Claude Lorrain and Nicolas Poussin.

It is difficult to mark out the certain period of art life of the painter. Although Krymov’s art changed in the course of time, but it always had inner wholeness and had no influence of environmental conditions. Working on the painting, the artist drew a lot of sketches, often on scraps of paper and lists from notebook.

Krymov handed down a great artistic legacy. The artist painted a lot till the end of his life. Works by Nikolay Krymov are in many museums of Russia and the near abroad, and in private collections. His works can be seen in many museums, insluding the State Tretyakov Gallery; the State Russian Museum; the Pushkin State Museum of Fine Arts; the A. A. Bakhrushin State Central Theatre Museum (GTsTM); the museum of Moscow Art Theatre (MKhAT); the Regional Museums of Fine Arts in Rostov-on-Don, Ulyanovsk, Tula, Bryansk, Nizhny Tagil; Astrakhan State Art Gallery named after B. M. Kustodiev; Saratov State Art Museum named after A. N. Radishchev; the National Art Museum of the Belarus Republic in Minsk; Kiev Museum of Russian Art; Odessa Fine Arts Museum and others.