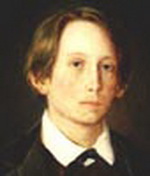 Apollinary Vasnetsov was born to family of a priest; his elder brother was the artist Viktor Vasnetsov. He was educated at the Theological Seminary in Vyatka (1866–1872). Vasnetsov studied drawing under the guidance of his brother, artist E. F. Andriolli. In 1872 he moved to St. Petersburg, where he coached to enter the Imperial Academy of Art (IAKh). Vasnetsov was under the influence of artist Pavel Chistyakov. However in the end, he decided not to enter the Academy. Since 1875 he worked as a teacher in the village of Bystritsa near Vyatka.

In 1878 Vasnetsov moved to Moscow. In early 1880s he became friends with S. I. Mamontov and members of the Abramtsevo Art Circle. He took advices of Ilya Repin and Vasily Polenov in art. Vasnetsov participated in I. Repin drawing evenings, musical and literary evenings at the Mamontov’s house in Moscow and in Abramtsevo. From 1880 till 1894 he lived almost every summer in Akhtyrka and in Abramtsevo, painted a number of landscapes of environs. Sometimes Vasnetsov worked at the Mamontov ceramic and joiner's studios.

In late 1890s — early 1900s Vasnetsov worked a lot as a scene-designer at theatres in Moscow and in St. Petersburg. He designed a number of productions for the S. Mamontov’s Russian private opera in Moscow, in particular A Life for the Tsar by M. Glinka, The Maid of Pskov by N. Rimsky-Korsakov (both — 1896), Khovanshchina by M. Mussorgsky (1897), Boris Godunov by M. Mussorgsky (1898). He collaborated with the Bolshoi Theatre, the S. Zimin’s Free Opera, the Solodovnikov Theatre, National Theatre, the Mariinsky Theatre, and the Society of opera singers.

In 1898 Vasnetsov exposed his works at Munich Secession. In 1910 he was awarded silver medal for paintings Winter fairy tale and Elegy at Paris World Fair. In 1900 he became an academician, in 1903 — member of the Imperial Academy of Art (IAKh). From 1901 till 1918 Vasnetsov lectured at Moscow School of painting, sculpture and architecture (MUZhVZ). In 1900–1901 he participated in exhibitions of the group Mir Iskusstva (“World of Art”). In 1903 he became one of the founding members of the Union of Russian Artists (SRKh, until 1922). In 1906–1907 Vasnetsov’s works were exposed at the exhibition of Russian Art, organized by S. Dyagilev in Paris, and then — in Berlin. In 1913 he was awarded gold medal for the painting Moscow torture chamber. End of the 16th century at the International Art Exhibition in Munich.

After revolution in 1917, Vasnetsov was elected chairman of the Soviet of art organizations in Moscow. He also worked at the commission Old Moscow; since 1923 he was a chairman of the commission. In 1922 Vasnetsov’s works were exposed at the 1st Russian Art exhibition in the Van Diemen gallery in Berlin, in 1924–1925 — at the Traveling exhibition of the Russian art in USA. In 1923–1930 the artist taught at the Artistic and Handicraft College. In 1929 the first personal exhibition of the artist was held at the V. I. Lenin State Library of the USSR, and was dedicated to the 50th anniversary of his creative work. In 1930 he became a member of the Association of realist painters.

Retrospective exhibitions of the artist were held in 1933 (posthumous), in 1950 and in 1956 at the State Tretyakov Gallery.

Apollinary Vasnetsov was one of the talented masters of Russian art of the end of the 19th century — the beginning of the 20th century. The significance of master’s artworks was not so great, but Vasnetsov received recognition for his social and educational activities. Vasnetsov’s works were characterized by interest in Russian history, traditions and culture.

Vasnetsov did not receive any systematic professional education. In the period of 1880s–1890s, he painted mostly landscapes, which were close to the manner of the Itinerants. Vasnetsov became famous due to his works of 1900s: paintings of Moscow, with wooden architecture in the pre-Petrine period. He was interested in rather historical and archeological challenges than artistic ones (composition, colors, plasticity).

Works by Apollinary Vasnetsov are in many museum and private collections, including the State Tretyakov Gallery, Nizhny Novgorod State Art Museum, the State Historical Museum, the Museum of history of Moscow, the State Museum-Reserve Abramtsevo and others. There is a Museum-apartment of A. M. Vasnetsov in Moscow.