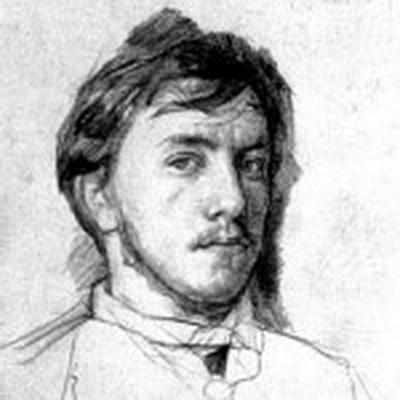 Born the son of renowned composer AN Serov and pianist VS Serov. In 1872, after the death of his father, moved with his mother in Munich, where in 1873-1874 he took drawing lessons from the artist R. Keppinga. In 1874-1875 he studied with Ilya Repin in Paris. The summer of 1875 he returned to Russia, lived in the estate Mamontov in Abramtzevo. In the autumn of that year he moved to St. Petersburg, studied at the gymnasium K. May. In 1876-1877 he lived in Kiev, attended a local grammar school and the drawing school, where he continued his artistic education under the leadership of NI Murashko.

In 1878 he again moved to Moscow, resumed training with Repin. In the summer of 1880 accompanied him on a trip to Zaporizhzhya and the Crimea. Autumn of 1880 entered the IAH, was a volunteer until 1882. In parallel, he studied at the workshop Pavel Chistyakov (1880-1884). In 1883-1884 studied watercolor with VD Derviz and MAVrubel. In 1885, a sketch from nature was awarded a small silver medal. In the same year left the Academy without completing the course. Traveled with Keppingom in Holland and Belgium, under the guidance of mastering the technique of etching. From 1886 for many years worked in the summer months Domotkanovo - estate Derviz.

Since 1886 (until 1900) has participated in exhibitions of the Moscow Society of Art Lovers. From 1887 attended the evening drawing in the house VD Polenov. In 1887, together with I. Ostroukhov brothers and MA and A. Mamontov visited Italy. In 1888, a portrait of S. Mamontov ( "Girl with Peaches"), and in 1890 a portrait of Mazini received first prize in the Moscow Society of Art Lovers. Since 1890 has exhibited his works at exhibitions TPHV, since 1894 - Member of the Association.

Since the early 1890's he worked in the pottery workshop Abramcevo, where his designs was made a number of works, including vases "Flying Demon" and "Hell, get out of the pots. In 1894, under orders Mamontov with Konstantin Korovin traveled to the North: in Yaroslavl, Vologda, Arkhangelsk, on the Northern Dvina and Sukhona, White and Norwegian seas. In 1897 traveled to Germany, visited Munich, Berlin, Hamburg. Subsequently, almost every year traveled to Europe.

In 1896 took part in the Munich Secession exhibition in 1898 was elected a member. Around the same time, Serov was an acquaintance with Alexander Benois and SP Diaghilev. In 1898 he began teaching in MUZhViZ (until 1909). In 1899 he organized in the School of portraiture-a genre workshop, which in 1901 led together with Korovin.

In 1898 took part in the "Exhibition of Russian and Finnish artists, organized by Diaghilev. He has designed staging of Judith AN Serov for Mamontov's private opera. He received the title of academician (1898). Since 1899 - Member of the exhibitor and the World of Art "(until 1911). Member of the Council of the Tretyakov Gallery (since 1899). He taught in private schools AA Hotyaintsevoy in Moscow and EN Zvantseva in St. Petersburg. In 1900 participated in the World Exhibition in Paris, was awarded a large medal of honor for a portrait of Grand Duke Paul Alexandrovich. Since 1901 spent summer months at his dacha in Ino (Finland). Since 1903 has exhibited his works at exhibitions of the Union of Russian Artists. In 1903 elected a member of IAH, in 1905 came from the Academy in protest against the shooting of a working demonstration.

Much to book graphics, created the illustrations for the anniversary edition of Lermontov (1891) and Pushkin (1899), a book by N. Kutepova The Tsar and the imperial hunting in Russia "(early 1900)," Fables "Ivan Krylov (1896-1911). In 1905, cooperated with the magazines "Bugbear" and "The Sting". In 1906 exhibited his works at exhibitions of Russian art in Paris and Berlin. Since 1907 - Member of the Association "Free aesthetics».

In 1908 he participated in the exhibition of the Vienna Secession. In 1909 and 1910, visited Paris, where he met Henri Matisse. He performed the Billboard (1909) and the curtain for the ballet "Scheherazade" (1911) for Diaghilev's Russian Seasons in Paris and London. In 1911 at the International Art Exhibition in Rome of Serov exhibited in a separate room. In 1911, the sketch paintings Nosov mansion in Moscow.

Art Serov less than three decades have passed a way from peredvizhnicheskogo realism and impressionism to modernism. A brilliant painter and draftsman, he had a reputation as one of the best portrait painters of his time and literally been swamped with orders. Painting has been the main application of the forces of the artist, but art Serova never confined by it. As an addictive nature, he sought to master the different materials and techniques: dabbled in ceramics, working with pastels, studied engraving created some fine etchings, which in 1980 was devoted to a separate exhibition at the State Russian Museum.