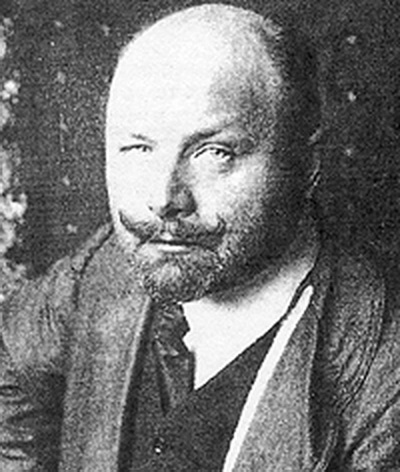 born in the family of Colonel (as a descendant of a noble family would add later, in Germany, to their names the prefix "von"). In 1874 he moved with his mother in Moscow. After graduating from high school in 1877 enrolled in the Cadet Corps, and then to a military school, where he studied until 1887. In 1890-1896 as an auditor visited the St. Petersburg Academy of Arts. There, in Repin's studio he met his future wife, MV Verevkina, worked in her studio. In the art galleries of the Hermitage and copied paintings of famous masters.

In 1896 he retired with the rank of captain and left with his wife in Munich, where he enrolled in school Aschbe.

In 1909 the artist, together with W. Kandinsky, A. Erbsloh, H. Munter and others founded the New Munich Kunstverein, soon transformed into a society "Blue Horseman. At the exhibitions of these groups actively exhibited Jawlensky.

for XX century - Fauvism, expressionism, constructivism and abstract art - only skimmed Yavlensky, he developed his own manner, passing through the influence of Ilya Repin and the Impressionists, V. Van Gogh, Cezanne, P., Pablo Picasso and Henri Matisse. Most worked in the genre of portraiture, which, apparently, most answered his creative aspirations and wrote the beautiful faces, the bright, "Icon Painting", then, like Rembrandt, stood out from the darkness. Jawlensky experimenting mainly in color, sharing the ideas of the French artist E. Verkade about ownership of art divine plan, the approval luminiferous latest means of painting pictures. Reflecting these quests were working Yavlensky 1911: they are all aflame open paints an extremely sharp combinations.

In 1914, after the First World War, the artist had to leave Germany and emigrate to Switzerland. Here he began writing his series of "Variations" - small in size composition, made with thin layers of paint on paper, structured under the canvas. The main motive for the cycle served as the view from the window of the room the artist and trees, some houses, the road leading to the lake and mountains in the distance are transformed into symbolic color forms that embody the experiences of the artist, the shades of mental states. The coloring of these tracks is related to the internal state of the master and often prompted by the mood in nature, as reflected in their names: "Spring Evening", "Magic Garden", "Melancholy", "Before the Storm».

Jawlensky wrote and floral still lifes, often turned to portraits of women by providing them with abstract titles: "A girl from Saint-Preux", "Neapolitan girl," "Dreaming", "Pasión", "Visible light . In the picturesque addressing these works are close to the "variation". His portraits are gradually coming to an abstraction, losing the need for similarity, becoming just a "head" ( "Crows", "Lola", "Spanish flu", "purple turban, etc.) on the verge of transition in color or black and white abstraction. The pictures Yavlensky gradually faded glow, becomes noticeable echoes of Cubism. By 1918-1919 his compositions became more linear, they felt the search for a new harmony ( "proto", 1919).

In 1924, finally settling in Wiesbaden, and receiving financial support from the collector and patron G. Kirchhoff, artist, along with W. Kandinsky, Klee, and P. L. Feininger created the association "Blue Four", for which the blue color symbolized spiritual enlightenment, an area of high human dreams and freedom. Jawlensky sought to reduce the number of expressive means by deepening their capacity. The coloring of work since becoming darker, heavily diluted oil paints, surfaces covered by them, as it were carelessly. In 1930 there were paintings with characteristic titles - "Karma", "great mystery", "Aurora", "Sacred Time", "Prophet of Tibet", confirming the evidence of contemporaries that Jawlensky worked in ecstasy, turning the inner eye to God, not expecting to exhibit their work. German artist friends called him Ivan Karamazov.

in 1930 in the paintings of the artist is a mix of the Orthodox world with an interest in Indian philosophy. On passion eastern wisdom says, for example, the appearance of paintings Yavlensky "Black Buddha».

artist himself considered his songs late period "meditation". In 1933-1937 they were united in a great series, being the reminiscences of Byzantine and Russian icons with their mystical dances, which are transformed into a confused and sad symbol of the face. The element of mysticism is expressed in the large eyes with black pupils. Solved in the cubist style, these paintings show a link with the traditions of Fayum mummy portraits, Byzantine mosaics, Orthodox icons.

Cycle "Meditation" or "Faces of the Savior, Jawlensky brought worldwide fame. In 1933 the fascist government of Germany has banned the artist to exhibit their work and confiscated their part.

In 1938, the artist ceased to paint because of the long-standing disease - arthritis.

When life Yavlensky since 1911 in Europe and the U.S. had gone through several personal exhibitions, and after his death, his son Andrew has been active in the promotion and dissemination of his work. In the 1990 Locarno (Switzerland), the artist's relatives issued a four-volume catalog reason pictorial and graphic heritage of outstanding master.