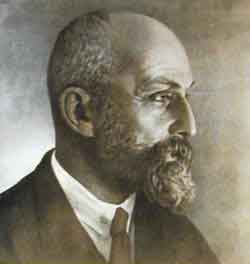 In 1896 Kardovsky moved to Munich, where he perfected his skills at the studio of Anton Ažbe. He travelled around Europe; in 1896 he visited Paris, in 1899 — Vienna, Lugano, and Venice.

In 1900 Kardovsky returned to St. Petersburg. In 1902 he was conferred the title of painter for the painting Samson and Dalilah. Since 1903 he worked as I. Repin assistant at the High Art School of Painting, Sculpture and Architecture under the Imperial Academy of Arts; since 1907 he headed the studio. In 1903–1905 Kardovsky taught at the Art School of Society for Encouragement of Arts, since 1904 — at his own studio. In 1907 he was conferred the title of professor.

In 1900s Kardovsky participated in exhibitions of the group Mir Iskusstva (“World of Art”) and Leonardo da Vinci society. In 1903 he was one of the founders of New Society of Artists. In 1901 he was sent to Munich in order to create design of the Russian section at the International Art Exhibition. In 1903 he obtained an order for creation of several monumental historical compositions for the cathedral in Novocherkassk.

Since 1907 Kardovsky lived in Tsarskoe Selo; in summer he worked in outskirts of Rostov and in Pereslavl-Zalessky. In 1910 and 1913 he travelled around Europe, visited Obersdorf near Munich, Lugano, Florence and Rome. In 1911 Kardovsky’s works were exposed at the World Exhibition in Rome. In 1911 Kardovsky was elected academician. In 1915 he became a full member of the Imperial Academy of Arts.

In 1919–1920 Kardovsky lived in Pereslavl-Zalessky. In 1920 he moved to Moscow. As a scene-designer, he collaborated with the Maly Theatre, Moscow Art Theatre (MKhAT), Moscow Art Theatre-2; he designed productions by A. N. Ostrovsky, I. S. Turgenev and others. In 1925 he was awarded a silver medal for his scene designs at the International Exhibition in Paris. From 1920 till 1930 he taught at the Higher State Artistic and Technical Workshops (VKhUTEMAS) — the Higher Art Technical Institute (VKhUTEIN), in 1922–1930 — at the studio on Tverskaya Street in Moscow, in 1930s — at Moscow Polygraphic Institute, the I. Repin Institute of Painting, Sculpture and Architecture in Leningrad. In 1930 was conferred the title of Honored Art Worker of the RSFSR (Russian Soviet Federative Socialist Republic). In 1932 he drew illustrations for the novel Peter I by A. Tolstoy.

In 1938 joint exhibition of Kardovsky and his wife, Olga Della-Vos-Kardovskaya, was held in Leningrad, and was dedicated to the 40th anniversary of their art activity.

Retrospective exhibitions of the artist were held in 1953 and 1967 at the halls of the Academy of Arts in Leningrad.

Kardovsky went down in art history as an eminent teacher and graphic artist, master of book illustration. His students were A. E. Yakovlev, V. I. Shukhaev, A. N. Savinov, D. A. Shmarinov, V. P. Efanov, N. E. Radlov, K. I. Rudakov, P. I. Shillingovsky and others.

Kardovsky followed aesthetics of the association Mir Iskusstva. In painting he mainly worked with subjects of Russian history. In book illustration, he tried to create a single whole organism, the ensemble of the book, where all parts of art design played an important role in the perception of literary work.

Works by Dmitry Kardovsky are in many museums and private collections, including the State Tretyakov Gallery, the State Russian Museum, the Pushkin State Museum of Fine Arts and others.