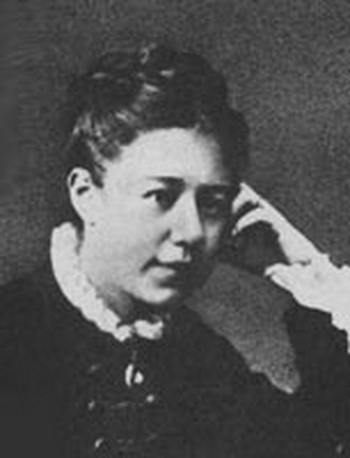 born in the family of a diplomat, archeologist and bibliophile DV Polenova, the younger sister of the artist VD Polenova.

original artistic skills gained under P. Cherkasova and P. Chistyakov, who worked since 1859. In 1864-1867 attended classes in the Drawing School of the Society for the Promotion of Artists (OPKh), where she studied at INKramskoy. Later he took private lessons. In 1869 went to Paris, continued her education at the studio Sh Shaplov. In 1871 returned to St. Petersburg. In 1875-1877 worked in the private workshop of Pavel Chistyakov. In 1877-1878 during the Russian-Turkish war, worked in the volunteer ambulance.

In 1879, he resumed lessons from Pavel Chistyakov. Simultaneously, in 1879-1880 she studied in the ceramics class Drawing School OPKh. In 1879 he was awarded a small silver medal, a year later received a large silver medal for the ceramic plate "Feast at Ivan the Terrible," a drawing by V. Schwartz. In the spring of 1880 received a trip to Europe for the study of ceramic production. A few months working in Paris in the ceramic workshop AE Egorov, the advice of ceramists ZH.-T. Deka and P. Siffert.

At the end of 1880 returned to St. Petersburg, continued education in watercolor class Drawing School OPKh. The same time there has taught painting on porcelain and faience. Established in the School Class of majolica. In 1882, a watercolor from life was awarded a large silver medal. Since 1880 has participated in exhibitions of the Society of Russian watercolors.

In the same year moved to Moscow where he has moved closer to Mamontov, becoming an active participant in literary, dramatic and drawing party at Mamontov, one of the key members Abramtsevo artistic circle. Created costumes and scenery for a play at home "Scarlet Rose" Mamontov (1883), "King Saul" SI and S. Mamontov (1890) and others. As set designer collaborated with the Russian Private Opera Mamontov, in particular, was responsible for the costumes of actors and chorus in the opera by Rimsky-Korsakov's "Snow Maiden" (1885). In 1884 joined the Moscow Society of Art Lovers, almost annually participated in its exhibitions.

In 1885, together with EG Mamontova organized in Abramtzevo rezchitskuyu millwork shop, which was headed until 1892. More than one hundred sketches of utensils and furniture, for which carvers workshop carried the product. Became one of the founders of Abramtzevo museum of folk art and pottery workshop. In 1884, traveled on the Volga, Don, the Caucasus, the Crimea. In 1884-1890 participated in polenovskih drawing watercolor mornings and evenings. Since the end of 1888 drawing Thursday on its initiative replaced with ceramic.

in 1893 became one of the founding members of the Moscow Association of Artists. In 1893-1894 participated in the design of the interior of the church women's vocational school in Kologrivov Kostroma Province. In 1895, together with A. Golovin, EA and AA Karzinkinymi traveled through Europe. In 1896, cooperated in the handicraft workshop MF Yakunchikovoy Solomyanka in the village of the Tambov province, which created the sketches of embroidery and panels. In 1897, for the treatment traveled to Spain and France.

In 1898, developed the project in the Russian style dining room for home Yakunchikovyh in Nara, near Moscow, and was preparing Handicraft Industry Department at the World Exposition in Paris in 1900. However, due to early death of these works the artist completed the Golovin.

Polenova Memorial Exhibition held in Moscow and St. Petersburg in 1902. Retrospective exhibition of the artist were organized in 1925 in Abramtzevo, in 1998 in Polenovo, in 2000-2001 in Tarusa and Serpukhov.

Creativity Polenova had a significant impact on the emergence of neo-Russian style of art turn of XIX - XX centuries. In his works, she sought to combine features of the national professional and academic art, many engaged in artistic and archaeological research, the study of traditional ornaments and folklore. The most significant contribution Polenova in the development of arts and crafts: ceramics, wooden furniture, embroidery. How easel, she worked less, preferring watercolor painting. Moreover, many watercolor sketches Polenova represent the development of ornamental motifs, were later reflected in the sketches of furniture and embroidery.

There is a problem of attribution of works of the artist in the field of arts and crafts. Hey, sometimes for no good reason, ascribed to many products carpentry Abramtzevo in the "Russian style", which she headed for a long time.

works of the artist are in many museum and private collections in Russia, including the State Tretyakov Gallery, State Russian Museum, Pushkin Museum im. Pushkin Museum-Estate "Abramtsevo" and many others.