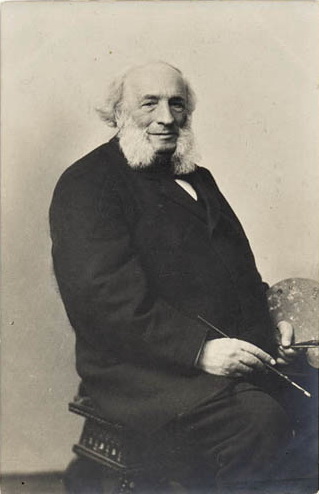 Ivan Aivazovsky was born to the family of Armenian small trader in Feodosia. He began to draw since early childhood. He studied under the guidance of local architect. In 1831 Aivazovsky was admitted to the Taurida gymnasium. In 1833–1837 he studied at St. Petersburg Academy of Art under the guidance of the landscape painter M. N. Vorobiev and the French seascape painter F. Tanneur. Tanneur taught Aivazovsky the main devices of waterscape.

In autumn 1833 Aivazovsky exposed at the academician exhibition five seascapes, which were highly appreciated in press. In 1835 Aivazovsky was awarded silver medal for the sketch The air over the sea. In 1837 he was awarded big gold medal and conferred a title of an artist for two paintings Calm in the Gulf of Finland and Kronstadt roadstead. At that time he was proposed to paint several landscapes of the Crimea, in particular the Crimean towns. This trip had a significant influence on the future of the artist. There Aivazovsky met P. S. Nakhimov, M. P. Lazarev and V. A. Kornilov; he became interested in sea battle-scene painting. In spring 1838 Aivazovsky returned to Feodosia and arranged his own studio. At that time he painted mostly from nature.

In 1840 Aivazovsky together with other pensioners of the Academy of Arts traveled to Rome in order to continue his education and to improve his technique of landscape painting. Aivazovsky studied classical art in the museums of Rome, Venice, Florence, and Napoli. He visited Germany, Switzerland, Holland, France, England, Spain and Portugal. Soon Aivazovsky became one of the most famous European painters. He participated in many exhibitions all over the world, including famous exhibitions of his works in Paris in 1843. Aivazovsky’s romantic seascapes Storm, Chaos, Neapolitan night brought fame to him. He was the first foreign painter who was awarded the Legion of Honor; exhibition of Aivazovsky’s paintings in the Louvre produced big impression on the French. The painting Chaos (in non-typical for him mystical genre) was bought by Vatican; Pope Gregory XVI awarded the gold medal to Aivazovsky for this painting.

In 1844 Aivazovsky returned to the homeland as a master of standing reputation, academician of the Rome, Paris and Amsterdam Academy of Arts.

In 1845 Aivazovsky became an academician, in 1847 — professor, in 1887 — honored member of the Academy of Arts. He worked as a painter under the Head Naval Staff. Aivazovsky as a member of the expedition of the navigator and geographer F. P. Litke visited Turkey, Greece, and Asia Minor. Aivazovsky also visited the Caucus, Egypt, Nice, and Florence; at the end of life he traveled even to America (1898).

Aivazovsky’s painting of 1840s–1850s was characterized by the influence of romantic traditions of K. P. Bryullov. Aivazovsky like Bryullov tried to create grandiose colorful paintings, which could glorify the Russian art. Bryullov’s and Aivazovsky’s manners of painting were characterized by brilliant painting skills, virtuosic technique, and quickness of execution.

Besides landscapes Aivazovsky painted a lot of historic battle-scene paintings about victorious battles of the Russian fleet. His painting Chesmensky battle (1848) was dedicated to the famous sea battle in 1770.

Aivazovsky was the last representative of the romanticism in the Russian art. His romantic paintings of the second half of 1840s — 1850s such as Storm on the Black Sea (1845), Monastery of St. George (1846), Entrance into Sevastopol Harbour (1851) were painted in epic heroic style.

There were also romantic features in the painting The tenth wave (1850). Aivazovsky succeeded in depicting power, greatness and beautifulness of the wave. Despite dramatic nature of the painting, it did not made gloomy impression; the painting was full of light and air, with optimistic sunbeams. The work was painted in bright colors with different tints of yellow, orange, rose, violet for sky and tints of green, blue, purple for water.

In 1865 Aivazovsky founded the first art school in Feodosia. In 1867 he began to work on the big cycle of paintings, which was dedicated to the revolt of Crete inhabitants because of vassalage of Turkish sultan.

In 1871 Aivazovsky was engaged in building of the archeological museum by his own design and at his own expenses. He also founded the first public library. In 1880 Aivazovsky arranged the picture gallery in Feodosia. The building of concert hall, the dacha of the editor of the newspaper Novoye Vremya (“New Time”) and famous writer of political essays A. S. Suvorin were built and designed with the participation of Aivazovsky. The sea commercial port and railway were also built by the projects of the artist.

Later bright color gamma of Aivazovsky’s paintings changed to the tonal unity. In latest works of the artist such as Black Sea(1881) he used fine gradations of treatment of light and shade in order to depict vast expanses of sea, movement of water and light. At the end of life Aivazovsky painted a lot of works in grey color gamma.

In 1898 Aivazovsky painted the picture Among the waves, which became summit of glory of the artist.