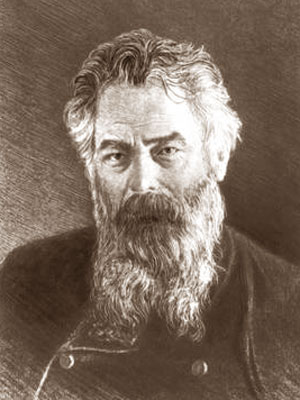 born in the family of the merchant. In 1852-1856 he studied at a MUZhViZ AN Mokritskiy. In 1856-1865 continued his education at the St. Petersburg Academy of Arts SM Vorobiev. In 1857 it received a small silver medal. In 1858-1859 made a trip to Valaam, where he met with the Abbot of Damascus. On his return he was awarded a large silver medal for the drawings and painted sketches, written on Valaam. In 1859, received a small gold medal for the landscape, created in the vicinity of St. Petersburg, in 1860 for two Valaam landscape - a gold medal and the right to travel abroad.

In 1861 he went to Yelabuga on sketches. In 1862, as a pensioner of the Academy, went abroad, visiting Berlin, Dresden, Prague, Munich, Zurich, Geneva and Dusseldorf. In 1863 in Zurich, visited the studio of the painter and engraver, R. Koller, where he met with the technique of etching. In 1865 he returned to Russia and for the painting "View near Dusseldorf" has received the title of academician.

has made repeated trips to view art in Russia, studying its nature.

Almost a year has exhibited his works at the Academy. In 1869 the painting "Noon. In the vicinity of Moscow acquired P. Tretyakov. In 1870 traveled to Nizhny Novgorod. He became one of the founding members of the Association of Traveling Art Exhibitions.

Since 1870, adhered to the formed in St. Petersburg mug etcher, started again for the engraving "aqua regia", which did not leave until the end of his life. In 1871, exhibited his work at the first exhibition TPHV and continued to participate in its exhibitions in the coming years. In 1872 at the contest organized by the Society for the Encouragement of Arts in St. Petersburg, now put "ship-timber in the Vyatka province. In 1873 became a professor of painting "In the backwoods. In 1879, together with his family and disciples EE Volkov and AN Schilder went to the sketches in the Crimea. In 1890 traveled to the province of Tver. In 1893 he was appointed head of landscape workshop High School of Art at the Academy of Arts.

Ivan Ivanovich Shishkin - a recognized master of landscape painting II half of the nineteenth century. In his works, "Rye" (1878), "Pine Forest" (1872), "Ship Grove" (1898), "Forest gave" (1884), "Oak Grove" (1887), "Misty Morning" (1885), "Among the Spreading Vale ..." (1883), "Morning in a Pine Forest" (1889) and others has created an epic image of the Russian nature, full power and majesty, inspired reassuring start. His work is characterized by a panoramic composition, precise spatial construction plans, the prevalence and pattern of light and shade over the color. The artist did not seek to reflect the changing nature of states, but rather represented a static nature, emphasizing its eternal, immutable traits. With remarkable precision conveyed the richness and diversity of plant forms.

in 1870 carried away by the art of etching, which became an independent region of the master's. Produced prints individual sheets and entire series, combining them into albums. Etchings Shishkina, stylistically and content close to paintings, contributed to the revival of this type of engraving in Russia.

Currently, the Wizard are in the collections of the State Tretyakov Gallery, State Russian Museum, Nizhny Novgorod Art Museum and the Kiev Museum of Russian Art, State Art Museum in Minsk, etc.