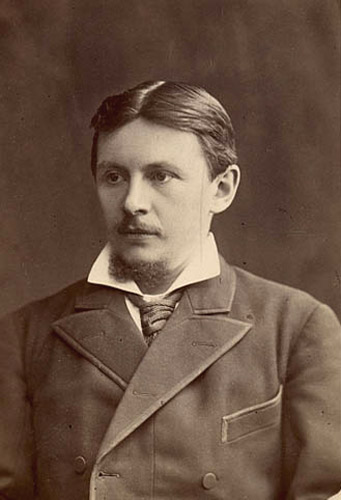 Yuly Klever was born to a family of professor of Dorpat University. Since 1867 he studied at the Imperial Academy of Arts (IAKh), at first as a noncredit student at the department of architecture, since 1868 — as a full-time student at the class of landscape under S. M. Vorobiev and M. K. Klodt. In 1870 Klever was awarded small and big silver medals for the painting sketches From Dorpat and From Tsarskoye Selo (“Tsar’s Village”). In spite of success in studies, he did not finish the course. In 1876 Klever was conferred the title of class painter of the 1st degree for the paintings Winter and The First Snow. In 1878 he was conferred the title of academician for his painting Abandoned Park in Marienburg. In 1879 Klever made a trip to Nargen Island in Estonia. In 1880s he traveled through Russia and Europe a lot. In 1880–1881 he studied landscape painting in Germany. In 1881 Klever was conferred the title of professor of the Imperial Academy of Arts for the painting Forest. In 1882, 1883, 1884, 1885 the personal exhibitions of the artist were held in St. Petersburg.

In late 1880s Klever was engaged in design of the park and in the decoration of A. G. Kuznetsov’s mansion on the Crimea, where he painted 15 pictorial panels for his estate Foros.

In 1890s Klever was called to witness in the case of abuse of the IAKh conference secretary P. F. Isaev. In this connection, Klever left Russia for some time, lived in Germany for several years. In late 1890s Klever returned to homeland. He lived in St. Petersburg, in Smolensk province, in Belarus, and in Baltics. He taught in his own studio in Riga.

Klever worked only as a landscape painter. Due to the artist’s complete mastery of painting techniques, Klever’s works were often demanded by customers, already at the end of the 19th and beginning of the 20th centuries his paintings were unique artworks for collectors. P. M. Tretyakov bought several works by the artist for his art collection.

Works by Yuly Klever (Senior) are in many museum collections, including the State Tretyakov Gallery, and the State Russian Museum.