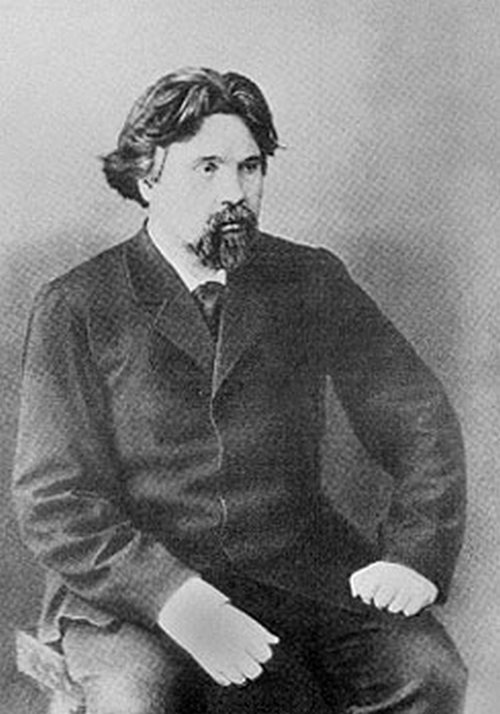 came from a family of Siberian Cossacks, the son of the provincial registrar. He studied at the parish school in Krasnoyarsk (1856-1858), then in the district school (1858-1861), where he received initial skills in drawing from NV Grebneva. Under his leadership continued to engage in drawing and painting until 1866. In 1864-1868 served as clerks in the Yenisei provincial administration.

In 1869 he moved to St. Petersburg. For several months, attended School of Drawing Society for the Promotion of Artists, where he studied under MV Dzyakava. In the same year joined the IAH, worked first as volnoslushayuschego in 1870 - a permanent student in the class of historical painting by P. Shamshina, BP Villevalde, F. A . Bruni, FI Jordan, K. B. Wenig, TA Neff, in 1873 - in the studio Pavel Chistyakov . For student work awarded medals: in 1871 and 1872 - two large silver for the drawings, in 1873 - two large silver for painting and drawing, in 1874 - a small gold for the program "Good Samaritan". Repeatedly received various prizes and scholarships for the sketches of biblical and evangelical subjects. In 1875, for the painting "The Apostle Paul explains the tenets of faith in the presence of King Agrippa, his sisters, Veronica and the proconsul Festus" was awarded as the class artist 1-st degree, without the awarding of a large gold medal. Despite this, the Council IAH filed a petition for the artist pensioner travel abroad for two years (not held).

Since 1877 he lived in Moscow, where he worked on murals on the First Ecumenical Council in the Cathedral of Christ the Savior (1876-1878) in 1882 was awarded for their Order of St. Anne 3rd degree and a gold medal .

exhibited his works at the exhibition to the 200-th anniversary of Peter I (1871), the All-Russia Exhibition Art and Industry (1882) in Moscow, the World Exhibition in Rome (1911). From 1881 he was a member and exhibitor TPHV (1881-1907, with interruptions) from 1908 - the Union of Russian Artists (1908-1916) Participated in exhibitions of the Moscow Society of Lovers of Fine Arts (1886-1904, with interruptions) from 1903 - Honorary Member MOLH. Member Abramtsevo artistic circle and the circle "Environment" (Shmarinovskie environment).

addition to easel painting, he worked as a watercolorist. He turned to books, graphic: in 1890-1900-X participated in illustrating edition NI Kutepova "royal and imperial hunting in Russia. End of XVII and XVIII Century "(St. Petersburg, 1896-1911), designed the collected works of Alexander Pushkin (Moscow, 1899), Lermontov (Moscow, 1914-1915) .

Vagankovsky buried at a cemetery in Moscow.

Surikov - an outstanding Russian painter of the second half of the XIX century, whose name is linked with a new flowering of the historical genre. From his early work sought to overcome the arbitrariness of the academic artistic language, in giving details of household composition, seeking specific historicity of architecture in the image, the credibility of the free group of characters. In his work appealed to the subjects, allowing to reveal the tragic contradictions of history, the logic of its development. The main actor in his films (mostly monumental) is the masses - a diverse, rich with vivid facial features, combined in a truly symphonic harmony. The overall color, rhythm, color patches, texture and direction of motion smear in Surikova are strengthening the psychological characteristics of a person, but the color often has a symbolic significance. In the open-air sketches proved himself as a superb colorist, achieving amazing sonorous harmony of pure colors.