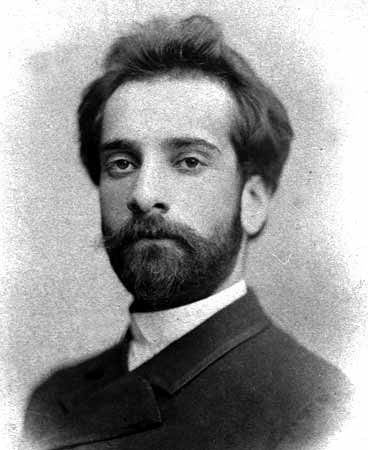 Isaak Levitan was born to poor Jewish family of railwayman. He was interested in drawing since early childhood. In 1873 Levitan entered Moscow School of painting, sculpture and architecture (MUZhVZ), studied under the guidance of V. G. Perov, A. K. Savrasov, and V. D. Polenov. In 1877 he was awarded small silver medals for the paintings Evening and Sunny Day. Spring, in 1878 — for landscape executed for examination at MUZhVZ, in 1881 — for the drawing from nature. In 1884–1885 he missed classes at MUZhVZ, but he was listed as a student of the School. In 1886 Levitan graduated from MUZhVZ with the title of non-class (free) artist.

Levitan lived in Moscow. The artist’s first paintings brought fame to him. In 1880 Levitan’s painting Autumn Day. Sokolniki was bought from the exhibition of MUZhVZ by the collector P. M. Tretyakov, who became later one of the major customers of the works by the artist.

In 1881–1882 Levitan gave private lessons in painting and drawing. Levitan worked for the Moskva (“Moscow”), Raduga (“Rainbow”) and Volna (“Wave”) magazines, in which his drawings and lithographs were published. Since 1884 Levitan took part in drawing evenings and watercolour mornings in the house of Polenov. In the same years he became close friends with S. I. Mamontov and members of the Abramtsevo art circle. In 1884–1886 the artist worked at the design studio of the S. Mamontov’s Russian private opera in Moscow. Levitan created scene design for the performances Rusalka by A. S. Dargomyzhsky, Faust by Charles Gounod, The Barber of Seville by Gioachino Rossini, Les Huguenots by Giacomo Meyerbeer, A Life for the Tsar by M. I. Glinka, The Snow Maiden by N. A. Rimsky-Korsakov (all — 1885), The Scarlet Rose by N. S. Krotkov (1886).

Every year the painter made trips to localities near Moscow and midland of Russia. In 1884 Levitan together with V. V. Perepletchikov made a lot of sketches in Savvinskaya Sloboda (village) near Zvenigorod. In 1885–1886 the painter visited Abramtsevo and worked there on landscape sketches. In 1886 and in 1899 Levitan travelled to the Crimea. In 1887–1890 during spring and summer months, the artist travelled along the Volga River, visited several times Ples, where he painted the major part of his works from so called Volga Cycle. In 1890s Levitan travelled to Europe: in 1890 he visited Berlin, Paris, Nice, Bordighera, Menton, Venice and Florence; in 1894 — Vienna, Nice, Lace Como, and Paris; in 1896 — Finland; in 1897 — Vienna, North Italy, Genoa, resort Nauheim in Germany; in 1898 — Nauheim, Munich and Paris.

Levitan was also engaged in teaching; in 1886 he taught painting in the classes of fine arts organized by the artist A. O. Gunst in Moscow. In 1898–1900 Levitan headed landscape class at Moscow School of painting, sculpture and architecture; his pupils were P. I. Petrovichev, M. S. Saryan, P. V. Kuznetsov, M. F. Larionov and others. In 1898 the painter was awarded title of academician. In 1898–1899 Levitan executed a series of illustrations for three-volume collected works by A. S. Pushkin published by the Printing House of A.I. Mamontov.

In 1900 Levitan died suddenly at the age of 39 because of lung haemorrhage. The memorial exhibitions of the artist were held in 1901 in Moscow and St. Petersburg, in 1903 — in Odessa and Kiev. The retrospective exhibitions of Levitan were organized in 1938 in the State Tretyakov Gallery, in 1939 — in the State Russian Museum in St. Petersburg; in 1960–1961 museum workers of the State Tretyakov Gallery organized travelling exhibition of works by Levitan in Moscow, Leningrad and Kiev.

Isaak Levitan is an outstanding Russian artist, “who founded the school of landscape, who depicted lyrical Russian landscapes, who created Russian style of landscape” as A. N. Benois noticed. In early and mature works of the end of 1870s — mid of 1890s, Levitan was close to the Itinerants with characteristic literariness and realistic manner of depicting nature.

In the second half of 1890s Levitan’s manner of painting changed; elements of art nouveau appeared in his works; at that time the artist was interested in French impressionism and post-impressionism. However the influence of these movements on the artist shouldn’t be overestimated. They only added some new features to the individual style of painting of Levitan, and they didn’t change the nature of his art in essence. Paintings by Levitan are the landscapes of mood, which are often characterized by one expressive motif. Landscapes by Levitan are also characterized by chamber spirit, inner monumentality, fine lyricism and meditative harmony.

Levitan left not very large artistic legacy. The major part of his works consists of paintings, oil and watercolour sketches. He rarely drew in pencil or Indian ink.

Works by Isaak Levitan are in many museum and private collections in Russia. The great collection of works by the artist is kept in the State Tretyakov Gallery. Works by Levitan are also in the State Russian Museum in St. Petersburg, the Pushkin State Museum of Fine Arts, Kiev Museum of Russian Art, Nizhny Novgorod State Art Museum, Saratov State Art Museum named after A. N. Radishchev and others.