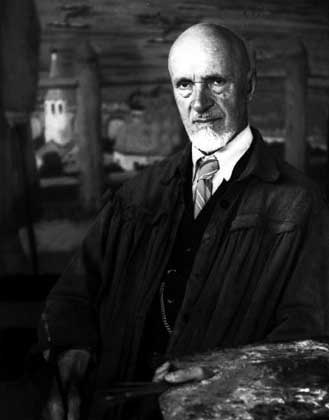 born in the family insurance agent, who comes from Switzerland. In 1894, he enrolled in MUZhViZ, the department of architecture. Soon moved to scenic department, studied with K. Savitsky, A. Arkhipov, L. Pasternak, in 1899 he worked in the studio VA ; Serov.

Participated in exhibitions of the Moscow Association of Artists (1899, 1902), the Association of Traveling Art Exhibitions (1900), "World of Art" (1901, 1906). Since 1903 was a regular exhibitor of the Union of Russian Artists in 1904 - was a member of the Committee of the Union. He worked primarily as a landscape painter, earning "well known" from Moscow and St. Petersburg public.

In late 1900's - early 1910-s designed the opera Russian Seasons Sergei Diaghilev in Paris. Undoubted success in staging Juon was the design of the opera Mussorgsky's Boris Godunov, staged at the Theater des Champs Elysees in Paris in 1913. In the sets and costumes demonstrated knowledge of Russian culture and history, which featured many paintings by the master.

Since 1910 the artist worked in theaters KN Nezlobin, SI Zimin Opera, the Maly Theater, Moscow Art Theater. In 1916 he participated in the design of the literary and artistic collection of "Half a century for the book: To the 50 anniversary of publishing activities Sytin».

After the revolution was one of the initiators of the school of fine art at the Moscow office of education. In 1920 won first prize for the draft curtain for the Bolshoi Theater. In 1921 elected a member of the Russia Academy of Artistic Sciences. Since 1925 - Member AHRR. In 1938-1939 supervised personal workshop at the All-Russia Academy of Arts in Leningrad.

In 1940, the sketch of the mosaic decoration of the Palace of Soviets. In 1943 awarded the Stalin Prize in 1947 elected a member of the USSR Academy of Arts. From 1943 to 1948 worked as chief designer of the Maly Theater. In 1950 he was awarded the title "People's Artist". In 1948-1950 headed the Institute of History and Theory of Fine Arts Academy of Arts of the USSR. Doctor of Art. In 1952-1955 he taught at the Moscow State Art Institute. VISurikova, professor. Since 1957 - the first secretary of the Union of Artists.

In early works Huon often turned to the motives of the Russian countryside: the artist interested in the state of nature, changing seasons, life of provincial towns and villages, the architecture of ancient churches and monasteries. His painting style has developed under the influence of lessons Korovin and Serov. After the revolution, the individual artist's hand has not changed, has a somewhat different range of subjects. In the 1920 - 1950 he created a series of portraits, paintings on the themes of the revolution and the history of contemporary life, which adhered to the realistic tradition. Landscapes of the time close to the manner of execution of the earlier works of 1910-ies, which are closely intertwined elements of impressionism and realism peredvizhnicheskogo. Stuffed delicate lyricism, they are the most precious of all the creative heritage of the wizard.

Yuon as a theatrical designer much inferior Yuonu-painter. Most of his theatrical work is not a new and artistic imagination, which are characteristic for staging many of his contemporaries.

works are in collections of many local museums, including the State Tretyakov Gallery and the Pushkin Museum im. Pushkin in Moscow, RM of St. Petersburg.