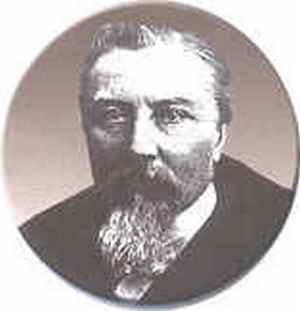 was born in the family of General Dragoons imperial army, a native of Poland. In 1850 he studied in the 2nd Kharkov Gymnasium in DI Bezperchego. In 1860-1864 he studied at the physico-mathematical faculty of Kharkov University, graduating with a degree of candidate of physical and mathematical sciences. At the same time took private lessons in painting and drawing at Bezperchego.

In 1864-1870 he studied at the IAH, first as an auditor, then - a permanent student at K. B. Wenig and BP Villevalde. During the period of study have repeatedly pointed out awards: in 1865 - a small silver medal for the sketch "The angel of death, beat all the firstborn of Egypt, in 1866 - small and large silver medal for drawing and sketch from life in 1868 - a small silver medal for painting Diogenes, dividing the cup ", in 1869 received a cash prize for the sketch song" The destruction of Sodom and Gomorrah. In 1870, a program now "Confidence Alexander of Macedon Philip, a doctor at the time of serious illness" has been awarded a large gold medal. In the same year was released from the Academy with the rank of class artist 1-th degree and a pensioner's right to travel abroad for six years.

In 1871-1877 - retired IAH. Since autumn 1871 and spring of 1872 lived in Munich, where he got acquainted with the work of K.-T. von Pilots and W. von Kaulbach. In April 1872 he moved to Italy for a while was in Florence in May settled in Rome. In 1873, for the painting "Sinner," written by order of Grand Duke Vladimir Alexandrovich of story poem by AK Tolstoy, was awarded the title of academician. At the World Exhibition in Vienna in 1873 for the same product was awarded the Medal "For Art". In 1874 exhibited "sinner" in a special exhibition in Warsaw, sacrificing income from the exhibition for the benefit of needy Polish artists. In 1876 he graduated from the painting "Phosphorescence of Christianity" ( "Torch of Nero"), which in 1876-1881 has been shown in many European cities: Rome, Vienna, Munich, Berlin, St. Petersburg, Warsaw, Krakow, Lviv, Paris, Poznan, Prague, Moscow , London, Zurich, Dresden, Stockholm, Copenhagen and Amsterdam. In 1876 was recognized as a member of the Academy of Arts in Berlin, Stockholm, Rome, Turin and Paris. In 1877 received the rank of professor of painting IAH.

After the expiration pensionerstva remained in Rome, where he had a studio, maintaining contact with the IAH. In 1878, the Uffizi Gallery in Florence commissioned Semiradsky his self-portrait. From 1879 spent summers on his estate under Strazhalkov Novoradomskom near Czestochowa. Since 1893 - Member of IAH.

Many worked in the field of monumental and decorative painting. In 1876-1879 was brought to the painting of Christ the Savior in Moscow. In 1883-1884 he wrote two songs ( "Funeral Virus in Bulgar" and "vigilantes Trizna Svyatoslav after the Battle of Dorostol in 971") for registration of the hall of the X century Rossiyskogo Historical Museum. In 1883 painted the ceiling of the "Light and darkness" in the palace of graphs Zavisha in Warsaw. Created plafonds "Aurora" (1886) and "Spring" (1890) in the house Yu.S. Nechaev-Maltsev in St. Petersburg. Posted altarpiece "Christ, the subdued storm" for the Evangelical Church Krakow (1882), the image of "Luke" and the song "The Martyrdom of St. Timothy and his wife Mary to St. Isaac's Cathedral in St. Petersburg (1886), altar arrangement" Resurrection "for the church All Saints in Warsaw and "Ascension" for the church of the monastic order of the Resurrection in Rome, "Crucifixion" for the Polish church in Kharkov (1891). In 1890, sang songs of "The Apotheosis of Copernicus" and "Entry George Ossolinska in Rome" for the library of Warsaw University. Created curtains Krakow (1894) and Lvov (1900) theaters.

collected a considerable collection of antiquities.

in 1902 was buried in Warsaw Cemetery Povonzki, in 1903 reburied in Krakow in the church Pauline on Skalka - the biggest cemetery of the Polish culture.

Semiradsky - the largest representative of the academic, "salon" of art in Russia in the second half of the XIX century. In his works he preferred subjects of the ancient and early Christian history. The works of artists are basically large multi-figured compositions, different skill building, careful design, bright color, detailed elaboration of the effects of sunlight.

Semiradsky works are in many museum collections, including the State Tretyakov Gallery, State Russian Museum, the National Museum in Krakow, Lviv State Art Gallery, the Uffizi Gallery in Florence and others.