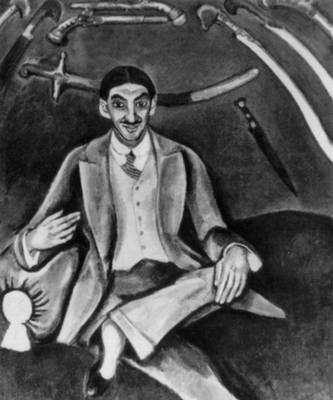 In 1893-1899 he studied at the Lazarev Institute of Oriental Languages in Moscow. I got carried away art. In 1901, he enrolled in MUZhViZ, but education is not completed. In 1903, drafted into the army, served in the Caucasus. In 1904 sent to the Russian-Japanese front. For some time he lived in Manchuria, was struck by the unusual light effects of this region and is largely influenced by their impressions of the Far East began a year later to develop his own theory of light.

Since 1907 he has participated in exhibitions - in particular, in the expositions of the Moscow Association of Artists. In 1910-1911 Yakulov often invited to arrange private balls and amateur performances. In 1913 he traveled to Paris. He met with Sonia and Robert Delaunay, finding the French masters of the proximity of artistic views. In 1914, together in B. Livshits and A.-V. Lurie published a manifesto, "We and the West." French text of the manifesto was published G. Apollinaire in the Mercure de France.

In 1914, newly drafted for military service. In 1916-1917, together with AV Lentulov, Rodchenko, VE Tatlin and others designed the interiors of the cafe "Pittoresk" in Moscow. Since 1918 he had worked as a theatrical designer, mainly for the Chamber Theater AY Tairov. In those same years, made friends with SAEsenin and AB Mariengof. In 1919, signed by, among other artists Imagist manifesto. He created the painting of interior and exterior of the cafe "Pegasus Stall on Tverskaya Boulevard, one of the most popular places in Moscow's bohemia, especially Imagists.

After the revolution taught in the first state of free art workshops. In 1920 he worked primarily as a theatrical designer and fashion designer. By this time, are the most successful works Yakulov for the theater: "Princess Brambilla (1920) and" Zhirofle-Zhiroflya "(1922), set at the Chamber Theater. In 1923 he created the design of the monument of the 26 Baku commissars. In 1925 he left for Paris, took part in the International Exhibition of art and decorative arts. Worked on design of the ballet "Le Pas d'acier" for non-repertory Sergei Diaghilev, delivered in 1927.

Creativity Yakulov can not be attributed to any one style, has gained acceptance in the first third of the twentieth century. He belonged neither to the Cubists, Futurists neither nor a constructivist, but at the same time used in his works the best aspects of each of the currents.

artist most clearly manifested itself in the works for the theater. Yakulov regarded theater as a massive, circus experiment, therefore, sought to emphasize its simplest bulk - "the principle of perpetual motion, a kaleidoscope of shapes and colors. In the play "Zhirofle-Zhiroflya", which you can call it "programming" work in order to express this movement, he resorted to the "kinetic machines, which put forward some parts, cleaned the other, descended the stairs, opened the hatches, built the passes." The scenery will inspire the audience, making the play began in 1922, the most popular entertainment of Moscow.

Works Yakulov represented in many museum and private collections, including the Pushkin Museum in them. Pushkin.