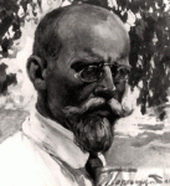 Young boy became interested in painting due to P. A. Vlasov, who taught him in Astrakhan Drawing School in 1890–1892. Goryushkin-Sorokopudov studied also under the guidance of V. G. Petrov and P. P. Chistyakov. He attended St. Petersburg school under the Society for the Encouragement of the Arts. In 1895 Goryushkin-Sorokopudov entered the Higher Art School under the Academy of Arts, in two years — the Academy of Arts, where he studied under P. O. Kovalevsky, I. E. Repin, and V. V. Matai.

Repin’s painting affected Goryushkin’s art deeply; it was expressed in detailed and constructive drawing, plastic forms, artist’s liking for portraits and scene compositions. Goryushkin combined in his art the realistic traditions of the Itinerants with academic school.

Goryushkin-Sorokopudov painted genre picture At the concert in Pavlovsk as a graduating work. On graduating from the Academy, Goryushkin was awarded the first prize for the painting Behind the fence of quiet cloister. At the beginning of 1900s he painted his first independent compositions (Violinist, 1902) and first essays of psychologic portraits (Portrait of mother, Portrait of wife, both — 1904).

Goryushkin-Sorokopudov took part in exhibitions since 1897. He exposed his works at academic exhibitions, exhibitions of the Society for the Encouragement of the Arts (OPKh), the Society of Russian Watercolorists and others. At that time the artist formed his own recognizable style, and chose subjects for painting. He painted in historical genre, on the motifs of Old Russia, patriarchal customs and folk life. The most significant works of the period of 1900s–1910s were Cult of the past, Lamentations of Jaroslav’s daughter, Scene from the 17th century, From century to century, Market day in old town, Judgement of God, Prince Igor, At belfry.

The artist worked as an illustrator with the magazines Niva (“Field”) and Stolitsa I Usadba (“Capital and Estate”). He designed books In forests by P. I. Melnikov-Pecharsky (1909), Prince Serebrenni by A. N. Tolstoy (1908–1910) and many others.

In 1905 Goryushkin-Sorokopudov left Russian history, and began to depict current events and life of the country: Barricades 1905, Devastation of manor house and others. In 1906 the artist together with A. I. Vakhrameev, N. F. Petrov and D. N. Kardovsky published the magazine Gamayun, although it had been suppressed by the censor. Under the impression of the war 1914–1918, Goryushkin-Sorokopudov created such paintings as Heroic deed of sister of charity (1914–1916), The captives have been brought! (1916).

The artist painted a lot of portraits; the most significant of them were The portrait of the actress A. N. Sobolshchikova-Samarina, The kiss, The portrait of the princess N. V. Mansyreva, Self-portrait, The girl in the bright sun, and The portrait of V. V. Fomina. In all artist’s genres and motifs, landscape played a significant part in the work of the painter, that’s why lyricism was characteristic for his paintings.

From 1903 till 1908 Goryushkin-Sorokopudov taught at the Drawing School under the Society for the Encouragement of the Arts. In 1908 he moved to Penza, lectured in Penza Art School (till 1954, with interruption).

After the revolution in 1917 Goryushkin-Sorokopudov was discharged from teaching. Penza Art School was reorganized into Artistic and Technical Workshops. However the painter actively took part in art and social life. He joined the Association of the artists of the Revolution (AKhR) and the Youth Organization under the Association of the artists of Revolutionary Russia (OMAKhR) in Penza; he exposed his works at the exhibitions of these associations.

In mid 1920s–1930s Goryushkin-Sorokopudov created a series of works dedicated to V. I. Lenin (Lenin and revolution, Lenin on a rostrum). He painted in traditions of Russian realistic landscape, genre compositions and portraits: Spring in homeland, Winter (1936), Ivanovka (1939) and others.

In 1943 the painter was awarded the Order of the Red Banner of Labour.

The memoirs Years of studies under Repin by Goryushkin-Sorokopudov were published in 1949; artist’s memoirs about his work in Penza in 1920s (Artist) were published posthumously in 1963.

In 1986 the Memorial Museum of I. S. Goryushkin-Sorokopudov was opened in Penza Art Gallery.