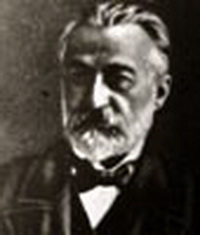 Mikhail Klodt was born to the family of the artists. His father K. K. Klodt was the colonel of artillery and the famous wood-engraver, his uncle P. K. Klodt was a sculptor, his cousin M. P. Klodt was a painter. Mikhail Klodt studied in the Institute of the Corps of Mining Engineers in St. Petersburg, under the guidance of I. F. Khrutsky. In 1851 he entered the Imperial Academy of Arts (IAKh), and studied in the class of landscape painting under M. N. and S. M. Vorobievs. Klodt was awarded all the existing academic awards during the period of his study: in 1853 he was awarded small silver medal, in 1855 — big silver medal, in 1857 — small gold medal for his painting View of the Island of Valaam, in 1858 —  big gold medal for his graduating painting View of Livonia, near Segevold. He graduated from the Academy with the title of class artist of the 1st degree and with the entitlement to pensioner’s trip abroad for three years.

In 1858 Klodt traveled abroad as a pensioner of the IAKh. He visited Germany, Switzerland and France. In 1861 he returned to Russia, where he was awarded prolongation of his pensioner’s grant till April of 1863. In 1862 Klodt was conferred title of academician for his paintings Valley of the Aa River in Livonia and Night in Normandy. Fishermen over the Fire. In 1864 he was conferred title of professor for the painting View of Orel Province, which he showed at the exhibition in the Academy.

Klodt traveled through Russia a lot; he visited Orel, Tambov and Livonia provinces, the Volga River. In 1870 Klodt became one of the founders of the Society of Travelling Art Exhibitions (TPKhV); in 1880 he left the Society, but continued exposing his works at its exhibitions.

Mikhail Klodt became one of the founders of the traditions of realistic landscape; his art belongs to the most significant phenomena in Russian art of the 2nd half of the 19th century. His early works (1850s —beginning of 1860s) were painted in traditional academic style. The flourishing period of the artist lasted from mid 1860s till the first half of 1870s, when he created his the most famous paintings: Oak Grove, Big Road in Autumn (both — 1863), Ploughed Field (1872), Evening View in Orel Province (1874), Forest Expanse at Midday (1876) and others. Landscapes by Klodt are characterized by attentiveness to natural surroundings and poetic perception of nature. In his late period, the artist painted epic landscapes under the influence of I. I. Shishkin.

Works by Mikhail Klodt are in many museum collections, including the State Tretyakov Gallery, the State Russian Museum, the National Art Museum of the Belarus Republic in Minsk and others.