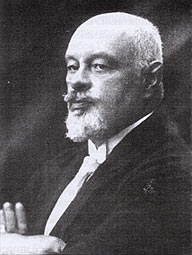 Mother of Alexey Hanzen, Maria was the third daughter of I. K. Aivazovsky. In his childhood Hanzen often visited the workshop of his grandfather. He was interested in seascapes and scenes of naval battles. Hanzen began to study painting under the guidance of Aivazovsky. He studied at the 2nd Odessa gymnasium, later at the Richelieu Lysée in Odessa. In 1900 Hanzen graduated from the faculty of law of Novorossiysk University. At the same time he attended Odessa Art School. After leaving School, Hanzen moved to St. Petersburg and studied at the Imperial Academy of Arts (IAKh).

In 1898–1904 Hanzen participated in exhibitions of the Society of South Russian Artists in Odessa and Spring exhibitions in the halls of the Academy of Arts. In 1904–1905 he created a series of paintings on the Russo-Japanese War: Wreck of Battleship “Petropavlovsk”, Night Attack and Torpedo Boats’ Repulse, Armoured Cruiser “Admiral Makarov” and others.

In 1904 Hanzen moved to Germany, where he continued his education at Berlin Academy of Arts under the guidance of K. Salzburg and H. Meier. Later he studied at Munich Academy of Arts under E. Brecht. Hanzen made several trips to France, Italy, Holland and Sweden. In Paris he was engaged in painting, under the guidance of E. Robert-Fleury and G. Lefebvre. Hanzen exposed his works at the Autumn Salon and the Salon of French painters. The personal exhibition of the artist was held in the gallery Modern Artists in Paris.

Sometimes Hanzen visited Russia. Since 1907 he took part in exhibitions of the Society of Russian Watercolorists. In 1909 he made a trip to the Crimea and the Caucasus.

In 1912 Hanzen returned to Odessa. He took the initiative in foundation of art museum, and assigned his own means for it. In 1914 he settled in the estate Roman-Eli in Staryi Krym; painted a lot of landscapes in oil, watercolor, sepia, gouache there. He also created etchings.

Works of Hanzen on the First World War were published in magazines Ogonek (“Little Fire”), Niva (“Field”), Solntse Rossii (“The Sun of Russia”) and Letopis Voiny (“War Chronicle”). In 1915 he painted big picture Battle of “St. Eugene” with “Goeben”, by the order of Russian government. The picture was exposed at the exhibition War in Petrograd. Album of Hanzen’s watercolors Russian Imperial Fleet was published one year later.

In 1917 Hanzen was nominated to the title of academician, together with I. Y. Bilibin, Z. E. Serebryakova, S. T. Konenkov; the voting was appointed in October, but was canceled because of Revolution events. In 1917–1919 Hanzen lived in Odessa, where he took part in exhibitions of the Society of South Russian Artists and the First people’s exhibition of paintings, posters and signboards.

Approximately in 1920 Hanzen immigrated to Bulgaria. He headed landscape workshop at Sofia Academy of Arts. The personal exhibitions of Hanzen were held in 1928 in Rome and in 1929 in Paris (gallery Petit).

Hanzen was buried in the orthodox cemetery in Dubrovnik.

Hanzen left a lot of works: about 3 000 paintings, drawings and sketches.

Works of Alexey Hanzen are in many museum and private collections, but the majority of his works is in Feodosia Art Gallery of I. K. Aivazovsky.