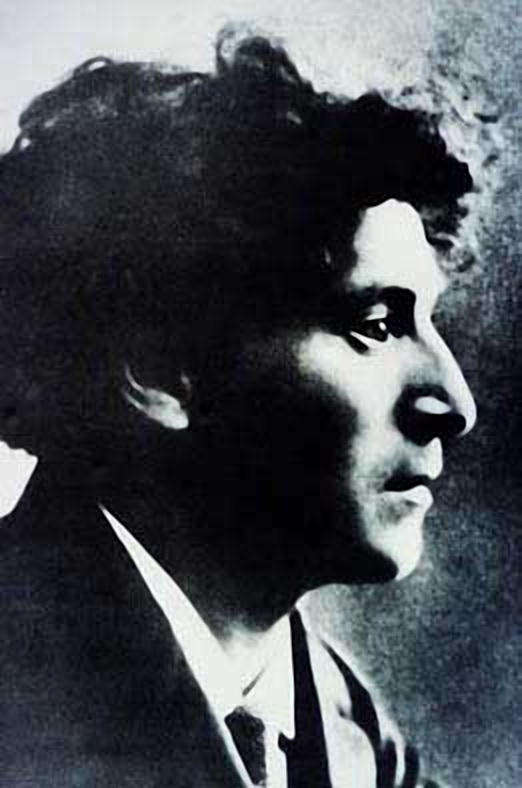 Marc Chagall is one of the leaders of the 20th century avant-garde; he was able to incorporate ancient Jewish traditions, as well as the most up-to-date innovations, in his unique oeuvre.

Chagall was born to the family of a merchant and was the eldest of nine children. Having received traditional religious education at home (he was taught Biblical Hebrew, Law of Moses and Talmud), for several years he attended heder (Jewish primary school) and later a secular Russian school. Since his early years he displayed considerable artistic talent.  His home, his family and his native town of Vitebsk had always been at the heart of his imaginary world, autobiographical, lyric and sincere since the very beginning.  His world was permeated with the spirit of his national religious traditions, as well as the sense of inseparability of the mundane and the eternal, which united the images of his childhood home and the whole universe.

In 1906 Chagall studied painting under Yehuda Pen at Vitebsk Art School, but in a short while he moved to St. Petersburg and in 1907 he attended the School under the Society for the Encouragement of the Arts (OPKh, 1907–1908).  In 1908 he attended the private studio of S. M. Seidenberg and the E. N. Zvantseva School of Drawing and Painting, where he studied under M. V. Dobuzhinsky and L. S. Bakst.

In 1908 Chagall started his painting career with Dead Man (or Death), which is now in the National Museum of Modern Art in Paris. In 1909 he painted My Fiancée with Black Gloves (now in the Kunstmuseum of Basel, Switzerland) and The Couple (The Holy Family) (National Museum of Modern Art in Paris). All the above-mentioned works were painted under the influence of the classical and symbolist painting, but at the same time they showed the development of Chagall’s unique style, based on the Neo-Primitivism tradition. His early works were first shown in spring 1910 at the school exhibition in the space which belonged to the Apollon (“Apollo”) magazine.

Having decided to finish his studies, in 1910 Chagall left for Paris, where he started to live in the artist’s residence La Ruche (“Hive”) in Montparnasse. He developed friendships with French poets and writers Guillaume Apollinaire, Blaise Cendrars, Max Jacob, André Salmon and others. At this time he started to create “surnaturalistic” works (the term “surnaturalisme” in relation to Chagall’s paintings was first used by Apollinaire). According to his contemporaries, the “dreamlike” spirituality and deep “human dimension” of his works associated his oeuvre both with Expressionism and Surrealism.

Even though Chagall led an active artistic life in Paris, he always called himself “a Russian artist”, stressing his affinity with the Russian culture. The innovative methods of Cubism and Orphism, such as geometrical deformation, faceting of cubic volumes, rhythmical organization of space and conditional color, are meant to create a tense atmosphere filled with emotions. In his paintings the ebb and flow of everyday life are spiritualized by timeless myths like birth, marriage and death.

In 1912 Chagall took part in the Autumn Salon and sent his works to famous Moscow exhibitions: Mir Iskusstva (“World of Art”), Osliniy Khvost (“Donkey’s Tail”) and Mishen (“Target”). The most important works of his first Paris period were Me and my Village (1911, New York Museum of Modern Art), To Russia, with Asses and Others (1911–1912, National Museum of Modern Art in Paris), Self-portrait with seven fingers (1912, Amsterdam, Netherlands), Golgotha (1912, New York Museum of Modern Art), Maternity. Pregnant Woman, Paris through the Window (both — 1913) and others. In these dreamlike paintings one can see no difference between the real and the imaginary, the appearance and the inner self.

In the meantime, Chagall executed the paintings The Pinch of Snuff (1912, private collection, Germany) and The Praying Jew (1912–1913, the Israel Museum, Jerusalem), which made him the main figure on the burgeoning Jewish art scene.

In June 1914 the first personal exhibition of Chagall was held in Berlin; it included almost all the paintings and drawings that the artist had executed in Paris. Those works had great success with the young German painters and directly influenced German Expressionism that emerged after the First World War.

In summer 1914 Chagall returned to his native town Vitebsk and saw the outbreak of World War I. In 1914–1915 he created a series of “documents” — more than 70 paintings depicting war, as well as Chagall’s other impressions. The series included portraits, landscapes and genre scenes, such as View from a window in Vitebsk, Barber’s shop, House in Liozno shtetl.

In 1915 Chagall married Bella Rosenfeld, and the motifs of ardent love played leading roles in his paintings: Over the Town (1914–1918, the State Tretyakov Gallery, Moscow), Double Portrait with a Glass of Wine (1917), The Birthday (1915–1923). He also executed a series “lovers”: Lovers in Blue (1914), Lovers in Green (1914–1915), Lovers in Pink (1916). In Vitebsk, before the revolution, Chagall painted monumental portraits Newspaper Seller, Jew in Green, Jew in Red; genre, portrait and landscape compositions Mirror (1915, the State Russian Museum), Bella with White Collar (1917, the National Museum of Modern Art in Paris) and many others.

After the revolution Chagall was offered a position of commissar of arts at Vitebsk Department of People’s Education. He also designed and decorated the city for revolutionary holidays. But ideological argument with local authorities forced him to leave Vitebsk for Moscow. In Moscow Chagall was engaged in scene design; for some time he taught drawing at colony for homeless children near Moscow. In 1920–1922 he took the first major steps to monumental art: he painted a series of big panels for the Jewish Chamber theatre in Moscow, where his personal exhibition was held in 1921 and the joint exhibition together with N. I. Altman and D. P. Shterenberg was organized in 1922.

Having left for Berlin in 1922, Chagall settled in France in 1923. Since then he always lived in Paris and in the south of France, which he left only for some years with the beginning of the war: in 1941–1947 the artist lived in New York. He traveled through a lot of countries of Europe and the Mediterranean, visited Israel several times.

Later the Chagall’s manner of painting changed, became lighter and more uninhibited. All central characters and all elements of the image became compositions of colors in the artist’s works.

In 1930–1931 Chagall collaborated with the publisher A. Vollard. By his order the artist executed more than 105 illustrations for the Bible; this work predetermined the main motif of the late period of his art — Biblical. In 1955 he started to work on so called Chagall’s Bible — big cycle of paintings, drawings, sketches, which opened the world of progenitors of the Jewish people in emotional, bright, naïve and at the same time wise manner. By the order of Vollard, Chagall also performed expressive illustrations to books Dead Souls by N. V. Gogol and The Fables by J. de La Fontaine.

In 1933 grand exhibition of Chagall’s works was held in Basel (Switzerland), and it brought him fame in Europe. In the same year, by the order of Goebbels, the artist’s works were burned in public in Manheim. Because of Jewish persecution in fascist Germany and foreboding of catastrophe, Chagall started to paint in apocalyptical style. During prewar years, the main element of his works became the Crucifixion: White Crucifixion (1938, the Art Institute of Chicago, USA), The Crucified Artist (1938–1940), The Martyr (1940), Christ in Yellow (1941).

Chagall took Bella’s death hard. However in 1952 his second youth started at the age of sixty five. He married Valentina (Vava) Brodskaya. Due to happy family life and voyage to the Mediterranean, Chagall caught his second wind, and started to create big cycles of colored lithographs, easel works and illustrations; in particular illustrations to the novel Daphnis and Chloe by Longus brought him fame in 1960–1962.

At the end of his life Chagall worked mostly in monumental art, mosaic, ceramics, and sculpture. In early 1960s he executed mosaic and tapestry for the Parliament in Jerusalem by the order of Israel government. During 1960s–1970s he created a lot of stained-glass windows for ancient Catholic churches, Lutheran temples, synagogues, public buildings in Europe, America and Israel, in particular ceramic panel and stained-glass windows for chapel in Assy (Savoy), stained-glass windows for Metz Cathedral, for synagogue of the faculty of medicine under the Hebrew University of Jerusalem, and for Fraumünster abbey in Zurich, for cathedrals in Reims and Mainz, and many others. These artworks together with secular decorative artist’s compositions, such as plafond painting of Paris Opera (1964) and the Metropolitan Opera in New York (1965), mosaic The Four Seasons for the National Bank of Chicago (1972), renewed the modern monumental art with new bright lyricism.
In 1973 Chagall visited Moscow and Leningrad in connection with the exhibition of his works in the State Tretyakov Gallery. In July of the same year, the museum of Chagall’s works Biblical Message was opened in Nice. The government of France gave to this “Chagall’s temple” the status of national museum.

In 1977 Marc Chagall was awarded the highest award of France — the Cross of Legion of Honor. From October 1977 till January 1978 the exhibition of Chagall’s works was held in Louvre and was dedicated to the 90th anniversary of the artist, despite the prohibition of celebration of the living artists.

There is detailed biography of Marc Chagall, written by his granddaughter Meret Meyer, which you could read here.