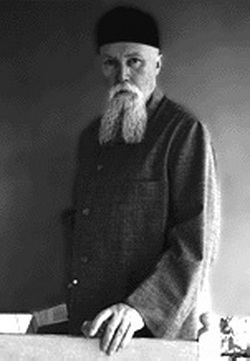 born in a family lawyer. In 1883-1893, as a schoolboy, studied drawing with artist M. Mikeshin, a close friend of the family. I got carried away in archeology, became a member of the Russian Archaeological Society. In 1894-1897 went to the excavations. In 1893 he entered the Faculty of St. Petersburg University and the Imperial Academy of Arts. Engaged in a landscape workshop in AIKuindzhi, the advice of Repin.

In 1895 he became acquainted with VV Stasov. I got carried away studying the history of Slavonic Russia. In 1897 the thought of a great series of paintings "Beginning of Russia. Slavs. In 1897 performed the first picture of the series - "The Messenger. Restore born on race "- and presented it to the reporting student's exhibition at the Art Academy. In the exhibition the painting was bought by PM Tretyakov. For "Gonta" Roerich received the title of the artist.

In 1897 resigned from the Academy, along with other students after dismissal workshop AIKuindzhi. In the same year was an acquaintance with Tolstoy. In 1898-1899 as a visiting professor read the Archaeological Institute of lectures on the subject of "artistic technique in the application for archeology. In 1899, on the academic exhibition was now "converge elders" from the series "Getting Russia. Slavs. In 1900, presented this work at the World Exhibition in Paris.

In 1900-1901 worked in the studio of F. Cormon in Paris. In 1902 participated in the exhibition "World of Art". In 1903-1904 he traveled along the ancient Russian cities, studying the ancient Russian architecture, gathering a collection of ancient art objects and creating architectural sketches, which in 1904 exhibited at the School of Society for the Encouragement of Arts, entitled "Monuments of Russian antiquity. In 1904, along with I. Repin, MAVrubel, VE Borisov-Musatov and others show their work at the World Fair in St. Louis (USA ).

In 1903-1904 he worked in the estate of Princess Tenisheva Talashkino (near Smolensk). In drawings Roerich workshops Talashkino created furniture, decorations. In 1904-1907 he wrote tracks mounted on the religious themes and icons.

in 1905 performed the cartons for majolica Friesians front of the house insurance company "Russia" in St. Petersburg, on the ancient Russian warriors.

in 1906 became director of the School of Society for the Encouragement of Arts in St. Petersburg, where he spent the reorganization of the workshops and brought in as teachers B. Mate, I. Bilibin, J. Tsioglinskogo and others, contributed organization at the School of the Museum of Russian Art, pursued not only educational, but also the artistic collective and objective. Many travel: in 1906 visited Italy, Switzerland, in 1907 - Finland, in 1909, 1912 - Germany, in 1913 visited the Caucasus.

In 1907, his debut as a theater artist, filling out the play "Three Magi" in the old theater in St. Petersburg. In 1908 he created the sketches of scenery and costumes for the opera "Snow Maiden" by Rimsky-Korsakov's setting the stage for the Opera Comique in Paris. In 1908-1914 he worked on the creation of interior painting and mosaic over the entrance to the Church of the Holy Spirit in Flenove near Talashkino. In 1909 he performed sketches of scenery and costumes for the "Polovtsian Dances" from the opera "Prince Igor" A. Borodin, sketches of scenery, together with A. Golovin, for the opera "The Maid of Pskov" N. Rimsky-Korsakov. (both non-repertory productions for Diaghilev, Paris, Theater Chatelet).

In 1910 he was elected chairman of the revived "World of Art».

in 1911 for non-repertory of Sergei Diaghilev in Paris, wrote to the panel "Battle of Kerzhenets" followed by a musical interlude with the same title from the opera "Legend of the Invisible City of Kitezh" N. Rimsky-Korsakov, sketches of scenery for a comedy "Fuente Ovejuna" by Lope de Vega (Old Theater). In 1912 designed the drama "Peer Gynt" H. Ibsen in the Moscow Art Theater, "Snow White" by Alexander Ostrovsky in the Drama Theater in St. Petersburg Reynard, Richard Wagner's opera "Tristan and Isolde" (opera in Zimin Moscow). In 1913 designed the play "Princess Mallein" M. Maeterlinck at the Free Theater in Moscow, the ballet "The Rite of Spring" to the music of Igor Stravinsky (entreprise Diaghilev, Paris, Theater des Champs Elysees). At this time developed an interest in Roerich Eastern philosophy and the philosophy of Leo Tolstoy. In 1914 he took part in the design of the play "Sister Beatrice M. Maeterlinck, the opera" Prince Igor "by Alexander Borodin (entreprise Diaghilev in London).

In 1915 he exhibited his works at the exhibition "World of Art". After the show now "Grad doomed acquired Maxim Gorky. At the same time took personal acquaintance of the artist and writer.

In 1914 he took "Baltic Exhibition" in Sweden, where a separate room was allotted to the works of Roerich. For participation in the exhibition Swedish government awarded artist Order of the Polar Star. In 1918 personal exhibition was held in Stockholm, which later traveled Finland, Norway, Denmark, England.

In 1919 worked on the design of the opera The Tale of Tsar Saltan "for Covent Garden in London (statement was not implemented).

In 1921-1922 paints landscapes of America. In 1921, in Chicago, with the participation of Roerich formed the Union of Artists Cor Ardens ( «Flaming Heart"), which aims to combine art figures for joint creative projects. In 1922 was established Corona Mundi ( «Crown of Peace") - an international art center, designed to implement the communication between peoples through cultural cooperation.

In 1922 on the stage of the Chicago Opera Theater presented the premiere of the opera "Snow Maiden" in the design of Roerich. In 1923 in New York museum was opened by Nicholas Roerich. At the same time the artist himself and his family went on an expedition to India and Central Asia, where he studied the life and sacred rites, ancient teachings, collecting archaeological and ethnographic materials. In 1926 he returned briefly to Moscow and again went to the Altai, in Siberia - in Mongolia, Tibet. In 1928 at the initiative of Roerich in Kullu valley was founded by the Himalayan Institute of Research.

In 1929 Roerich has pioneered the development of the Covenant for the Protection of Cultural Property in the war years. In 1930 he returned to India in Nagar village, located in the Kullu valley.

In the 1920 - 1940 Roerich wrote articles, books published in various languages, on issues of culture and ethics. He was a member of more than forty scientific and artistic institutions in the world: an honorary president of the American-Russian Cultural Association in New York, the honorary president of the international union of the Roerich Pact in Bruges, a member of the Yugoslav Academy of Sciences and Arts in Zagreb, a member of the Academy of Rheims in France and many others.

topics of Roerich's work was determined interest in the history of Slavic pagan Russia, Russian and Scandinavian language ( "Idols", "Messenger", "trip to Vladimir Korsun," "Slavs on the Dnieper," "Song of the Viking ), and since 1920 - to the eastern folklore, Eastern religions ( "Krishna", "Guga Chohan", "Maitreya Winner"). He wrote and landscapes ( "Rostov the Great", "Landscape with boulders", "Royal Monastery. Tibet," Himalayas. Daybreak in the mountains "). Treatment of subjects at different Roerich epic, intense emotion, sometimes tinged with religious mysticism, in the late works of his notable feature sometimes becomes complicated allegory plan. The artist's work is peculiar stylization, lapidary expressive means (contour drawing, local contrasting colors, the flat-decorative form of treatment). Significant impact on the career of the master had a Russian icon.