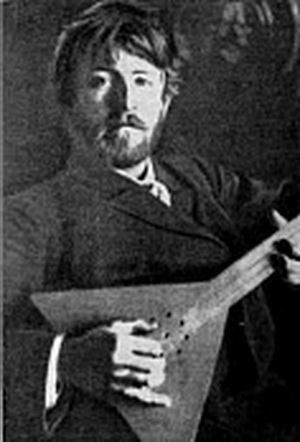 Born into a peasant family, which among other things involved iconic craft. Original art education was under the leadership of his father. In 1875 entered MUZhViZ, studied at Perov, IM Pryanishnikova, Sorokin.

Upon its completion, he moved to St. Petersburg, entered the IAH, was engaged under the direction of Pavel Chistyakov. In 1887 a sketch artist's model won a large silver medal in 1889 for the program now "Angel brings the apostle Peter from prison" - a small gold coin. A year later, made a big competitor a gold medal with the picture of "Golgotha", but for deviating from the original sketch was not rewarded. Released from the Academy with the rank of class artist 1-st degree.

In 1891 he settled in the estate of JF Tyumenev Freedom Novgorod province. Then he began to participate in exhibitions TPHV. In the late 1880's - 1890's traveled a lot in the cities of central Russia. In 1890 he wrote the icons created sketches of mosaics and murals for churches in Novorossiysk and the Warsaw Church of the Resurrection (Savior on Spilled Blood) in St. Petersburg, large and small halls and churches of St. Petersburg Conservatory. He worked in the field of book graphics.

in 1895-1898 exhibited his paintings at the exhibitions of the Society of Artists of historical painting.

in 1900 for the painting "XVII century Moscow Street", "Family merchant XVII Century," Russian Women of the XVII century in the church "is marked by an honorary diploma at the World Exhibition in Paris. In the same year he moved to the estate of the artist VV Belyaeva Didvino. In 1901-1903 took part in the exhibitions "World of Art", as well as in the first exhibition of the Union of Russian Artists in 1903. In the same year went for treatment in Switzerland, visited Dresden and Munich.

memorial exhibition of works Ryabushkin were organized in 1912-1913 in St. Petersburg and Moscow. Retrospective past masters in 1961 in Moscow and Leningrad in 1962-1963 - in Minsk, Kiev, Lviv.

Andrew Ryabushkin - one of the leading Russian artists abroad XIX - XX centuries. Despite the relatively short period of active creativity, just about fifteen years, the artistic heritage Ryabushkin large enough: dozens of paintings, hundreds of sketches and drawings, it is known that for the picture "Golgotha" was written more than fifty paintings preparatory sketches and studies.

worked primarily in the historical genre. The subject of interest was the master of pre-Petrine Russia - its way of life, costumes, holidays. The artist has developed his own style in painting, the distinguishing features of which are bright colors and sonorous decoration. Significant role in his paintings assigned landscaped grounds.

Ryabushkin works are in many museum and private collections, including the State Tretyakov Gallery, State Russian Museum, the Scientific Research Museum of Russia Academy of Arts and others.