The artist Shepard Fairey was accused of falsifying documents in the case of a poster with a picture of Barack Obama
ARTinvestment.RU   02 марта 2012 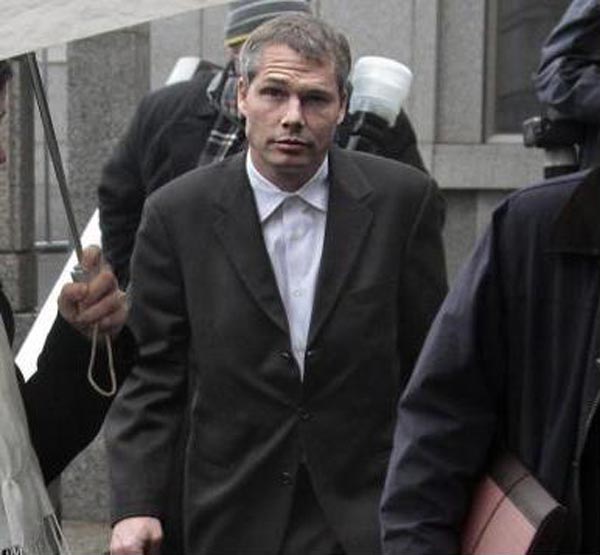 Shepard Fairey comes out of the hall of the Federal Court
Source:

Shepard Fairey American artist (Shepard Fairey) has become famous primarily as the author of a poster depicting Barack Obama HOPE («Hope"), he established in 2008 to campaign black senator from Illinois. The popularity of the poster HOPE in America was comparable to the popular textbook image of Che Guevara. Obama's portrait in red and blue colors hung on the windows and balconies, and one copy even entered the collection of the National Portrait Gallery in Washington .

however, rest on our laurels for a long time did not give the artist: he filed a lawsuit Assosiated Press Agency for the misuse of photos of Manny Garcia, served as the basis for the HOPE poster . Shepard Fairey has never hesitated to borrow works of other authors to create their own - it belongs to the number of so-called artists apropriatorov , the best known of which (other than the Fairey), Richard Prince and Jeff Koons. Apropriatory not find it necessary to refer to the authors of original works, which they use. Ignoring copyright often leads them to the dock.

Trial Shepard Fairey, and between Assosiated Press dragged on for two years. In January of 2011 the media reported that the parties reconciled , and agreed that they would produce a joint product with the symbols of HOPE. In addition, they talked about paying some financial compensation, the exact amount of which, however, was missing.

But these days this thing has taken a new turn: against Fairey has been accused of destroying a number of documents and falsification of some other material in the case of HOPE poster. The court's decision will be announced on July 16 this year. In the worst case, a federal court can sentence the artist for a minor offense to six months imprisonment.

Fairey pleaded guilty and said that "abuse the trust of the court was the worst of what he once -either made in my life. " According to the 42-year-old artist, he was, both then and now ashamed of their actions.

Federal Attorney Preet Bharara (Preet Bharara) believes that Fairey "has gone to extreme measures, to unfair and illegal way to gain an advantage in his civil suit, creating some materials and destroying other ».

« Civil and criminal justice system is based on the consent of lawyers and lawyers to follow the rules - says Bharara . - Those who violate the rules risk being prosecuted, including in some cases to criminal ».

So what exactly is the offense Fairy? During the initial hearing in the case of an artist in the testimony of Judge Frank Maas (Frank Maas), said that when you create a poster depicting Barack Obama in January 2008, he was convinced that uses part of the photo on the full version of which the Illinois senator is depicted in the company Actor George Clooney on the background of the American flag. It was only after he had received a subpoena, he had realized that it was a very different picture taken at the same event.

This story he told in court, but Indeed Fairy before meeting with their lawyers destroy files, proving that he handles that photo without Clooney, because of which went all the fuss, and, conversely, had forged the documents of which it became clear that he allegedly used image of Obama with photos of Clooney. "His lawyers, I showed fake documents, talked about how to create jobs and that poster, I used a photo from Clooney - says Fairey. - I knew I had to correct the deed, but over time it became harder and harder to admit" .

artist hid the truth for months and even drew a witness to support their lies, and all would have gotten away with his hands, if one of its employees do not accidentally stumbled on the files that are believed destroyed Fairey . "I immediately admitted that he had done, my lawyer, my wife, staff and friends. A few days later authorized the lawyers to write a letter to the court and the agency AP, explaining my actions ».

Assistant Attorney Daniel Levy (Daniel W. Levy) Maas told the judge that the prosecution intends to request a temporary imprisonment for Fairey. But the judge denied the request of the Meuse charges appoint a pledge of $ 100 thousand dollars, because, as he believes, because of plea, it is unlikely to attempt to evade justice.