May 12, at the eighty-second year of life died on the famous artist-nonkonformistka of «Lianozovsky range» Lydia Masterkova

May 12, at the eighty-second year of life died on the famous artist-nonkonformistka of «Lianozovsky range» Lydia Masterkova. She died in France, where lived since 1975.

In France, Lydia Masterkova emigrated shortly after the legendary Moscow exhibitions informal artists, in which she participated, - cruelly broken authorities «Bulldozer Exhibition» Belyaevo in 1974 and followed it in 1975 authorized, but worked a very short exhibition in the pavilion «Beekeeping» to VDNKh.

Recent years Lydia Masterkova was almost eremitic life in the village of San Laurent in tripartite kilometers from Paris, where he continued to work. In 2006, her retrospective was held at the Tretyakov Gallery. An example of late art can serve as a graphic series on Russian poets of the Silver Age, where the artist presented in the form of black and white circles, like planets. Celestial bodies in general were one of the permanent plots. 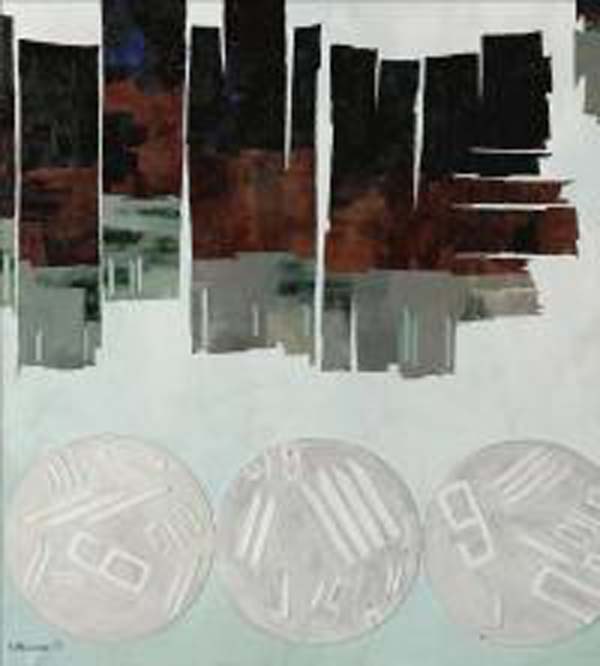 Symbols of circle, in the words of the artist, appeared in her works under the influence of Dante. One of the first postwar Russian avangardistok, she was in constant creative dialogue with the classical culture, and Dionysius, or El Greco for her were not less important than in Soviet times poluzapreschenny Cezanne and American abstract expressionism, which, after the famous exhibition of American art in Moscow in 1959 was fond many. But Lydia Masterkova was one of the first postwar generation, for whom the abstract was the native language of art.

Lydia Masterkova was born in Moscow in 1927. Various arts it with fond childhood: she studied music, taking acting lessons from associates of Stanislavsky. In 1943, she entered art school at Chudovke, where teachers were disgraced modernists, Robert Falk, Moses Khazanov and Michał Perutsky, and students - many future classics recusancy, such as Mikhail Roginsky, Boris Turkish Nicholas Vechtomov. School closed for the «left slope», and Lydia Masterkova continued training in the school name in 1905. One of her fellow students at the school for Chudovke, Nikolai Vechtomov, Lydia Masterkovu acquainted with the artists and poets, and later formed the so-called Lianozovsky group.


Each of the artists lianozovtsev, be it Oscar Rabin, Eugene Kropiwnicki or Vladimir Nemukhin, whose wife was Lydia Masterkova, developed its own version of modernism. Lydia Style Masterkovoy extremely personal and lyrical, but at the same time not devoid of mysticism. She soon began working with the techniques of collage and include in their composition laces, old fabrics, and even a church with gold embroidery, which is found in abandoned temples. Lydia Masterkova called a faithful man, though not religious, and believed that the vanguard could occur only in Russia, with its icons and open spaces.

Since 1960 Lydia Masterkova took an active part in the underground artistic life in Moscow. Her first «personalka» took place in the art rental gallery of Ilya Tsirlin house Shalyapin on Novinsky Boulevard. It was exhibited at the American journalist Edmond Stevens and a famous collector and patron George Kostaki. In 1967 she took part in a group exhibition of nonconformists in the club «Druzhba» road enthusiasts who had been shut down by scandal KGB. And from the same year her work displayed at international exhibitions of Russian artists informal.

Her work is in many major international collections of modern Russian art, such as collections of American Zimmerli Art Museum, Norton Dodge and assembly Dina Verny, which Lydia Masterkova doing solo exhibition after his emigration to France. However, in the international art system Lidia Masterkova and not integrated while remaining true to its strong position marginalki, alien to secular concerns, and not dependent on them.