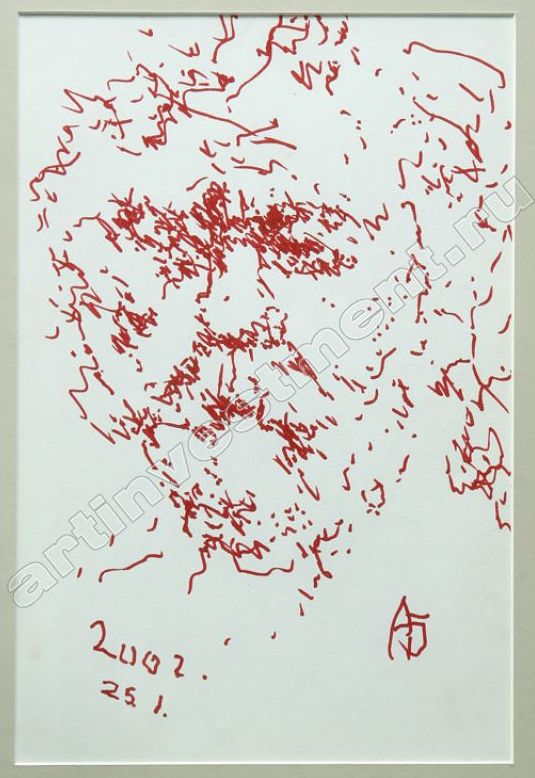 April 18, 2013 in Moscow Museum of Contemporary Art, an exhibition of the Moscow expressionist painter Aaron Buch, timed for the 90th anniversary of the master . The exhibit features about 70 paintings and drawings from the Museum of Aron Bukh and private collections, as well as film, in which the artist captures the work. This solo exhibition can safely be called one of the most representative among dozens of solo exhibitions of the artist, held at the various exhibition sites in the last decade.

Aaron Froimovich Buch was born in Berdichev, Zhitomir region in 1923. In 1926, fleeing the pogroms, the family moved to Moscow. He began to paint early - « godika when he was one and a half - was the first time he remembers, picked up a pencil. At three, as he later told his aunt, it can not be torn away from this lesson. " in 1937-1941 worked in the House of artistic education of children of the Soviet area, with the beginning of the war the family was evacuated to the city of Engels, Saratov region, and training had to be interrupted. In 1941-1944 he worked in the rear, at a defense plant. In 1944 he returned to Moscow and studied at the art studio of the year at the All in Juon . In 1945 he entered the Moscow regional art school of 1905, he studied under the guidance of artist N. Baksheeva ; graduated from college with honors in 1947 (thesis - the painting "Spring on Sretensky Boulevard") and since 1948 has started to lead a rather active exhibition activities. In 1959 he became a member of the Union of Artists of the USSR.

By the end of 1980 Buch occasionally participated in group exhibitions of the Union of artists, working on the elaboration of their own means of expression, combining in his paintings academic methods classical figurative art with expressive close to impressionism style of writing. «The main thing - more me than you, and in the value of art. You know, in the words of Paul Signac: "Art is not accuracy, but a way to think and express themselves." That's where I expressed myself. Nature is not a matter for the image, and is a source of inspiration! »

eighties of the twentieth century and especially their end - a landmark for the entire period of Soviet art. Time for change, with the advent of perestroika and the fall of the Iron Curtain current (actual) domestic arts was trying to find its place in the global context and declare themselves one way or another in their own country.

However, this changes, apparently, not too affected the lives and work of Buch: he did not belong and do not consider themselves to any of the existing camps - either to traditional realism, nor to non-conformism, not to the current contemporary art. Art Buch obviously evolved in isolation - and that it may have been one of the causes of the crisis that occurred in the creative life of the artist in the mid-1980s. The chronicle of the events, as well as discussion of the artist's work before them, for the most part belong to the realm of conjecture and speculation. It is known that Buch burned vast majority of his works, written before 1984, the formal reason was the indifference of someone at the Artists Union in relation to his paintings. But is it possible to master, hurt by a petty official, took and burned the work of more than one decade? Probably, it could be - an emotional gesture. Or, as the version he was already prepared to have to go on, and surrounded by a "spent material" may himself without realizing it, has responded to the purification of reason, which he provided the bureaucratic callousness.

All of his following films are made in a different style that characterizes the artist's creative heyday, which lasted nearly two decades, until his death in 2006.

Buch invents his own, very expressive and sensual language of artistic expression. Always gravitated to the expression, it goes away from the academic interpretation of the image to the expressive abstract art, sometimes - in the spirit of Pollock and de Kooning, but without giving up completely on figurative art.

he is faithful and traditional materials - canvas and oil, but the palette and brushes as the basic tools to work with the paint is gone. Smears - pasty, texture and volume - are imposed mainly hands and trowel surface of the painting literally molded by the master fingers and brush used except to create a final touch. In these circumstances, the artist is forced to work quickly, accurately, mixing pure colors directly on the canvas, close to the impasto technique. The very process of creation becomes a creative act of self-valuable, equal in importance to the charge and its result: «This painting comes to life in the distance. We must be able to extract the sound of the colors in the color space ».

In this way its original artist writes a lot and be happy - from the abstract (abstract expressionism) to traditional and on- still close to him figurative genres - portraits, landscapes, nudes and still life. By the mid-1990s, his works are gaining popularity.

Today Buch paintings are in museum collections, including the State Tretyakov Gallery, the Museum on Poklonnaya Hill (Moscow) and a number of other , and in private collections in Russia and abroad.

market his work is young and events not deprived. The next peak sales came in 2008-2009. In 2008 there was a catalog of works Aron Bukh "Individuals" (Moscow), in the same year presented at the "Art Manege", a year later, a new catalog accompanied the solo exhibition at the Russian Museum (St. Petersburg). Approximate price range of his work during this period can be determined from prices "Art Manege - 2009": the lowest offers were at around 15,000 dollars, the highest - about 100 thousand dollars.

Aron Bukh is present in the auction market. In 2007-2012, were exhibited at the auction 44 of his paintings (22 of them - floral arrangements), and 11 graphic works. 19 are sold. Probably largely to blame for the "geography" of auctions: the auction as evidence base AI, 96,4%of works were exhibited at the Moscow stages. Ibid, and sold paintings in the range from 7500 to 80 000. And in the western auctions work Buch appear until quite rare. And with the expansion of this practice, prices need to rise.

Interestingly, the crisis of 2008 was not greatly affected by Statistics auction sales of works Aron Bukh. The record price - 80 000 was given to 19 November 2008 during the auction the auction house "Sovcom" for the landscape "Autumn Forest". In 2010, this result was repeated at the auction of the same "Sovkoma": the same 80,000 paid for a 2001 still life "Flowers in a white vase." Considerable variation in prices for the gallery and auction markets are often explained by the quality of specific items. But in general, according to some experts, which agrees ARTinvestment.RU, creativity Aron Bukh is still significantly undervalued.

scale exhibition in the MMSI shows that the steady interest in the work of Aron Bukh retained his paintings are gaining new fans. The last year has brought a great record in the treasury of the artist, but the obvious high potential of his work, which, hopefully, will soon result in another record-breaking results.