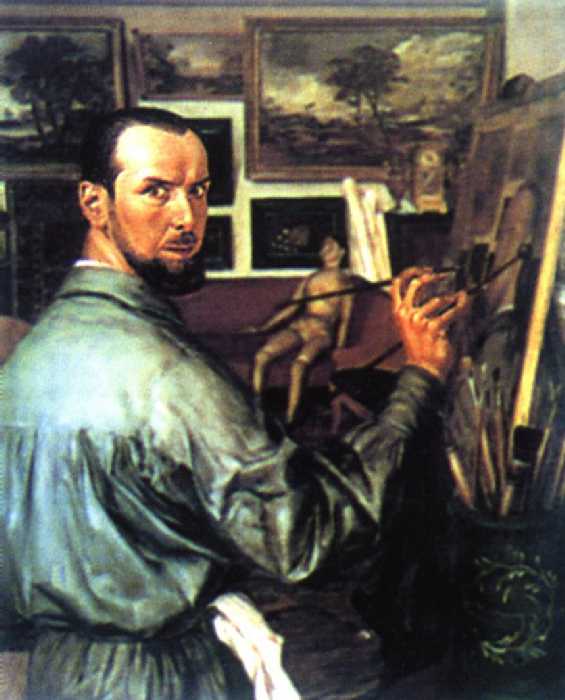 Alexander Yakovlev was born to a family of naval officer. He finished the K. I. Mai gymnasium in St. Petersburg. In 1905 Yakovlev entered the Academy of Fine Arts, studied under the guidance of D. N. Kardovsky. He became good friends with V. I. Shukhaev and V. A. Lokkenberg; summer months they painted in the village Barmino on Volga River.

Since 1909 Yakovlev collaborated with the magazines Apollon (“Apollo”), Satirikon, Noviy Satirikon (“New Satirikon”), Niva (“Field”). In 1909–1910 he exposed his works at the Salon of V. A. Izdebsky, at the exhibitions of the Union of Russian Artists. Since 1912 Yakovlev participated in the exhibitions of the group Mir Iskusstva (“World of Art”); in 1915 he became a member of this group. In 1912 he exposed his big group portrait At the academic dacha at the Baltic exhibition in Malmo; his work evoked warm responses, including the enthusiastic article of A. N. Benois.

In 1913 Yakovlev was conferred the title of an artist and pensioner trip abroad for the paintings In bathhouse and Bathing. In 1914–1915 he together with V. I. Shukhaev traveled through Italy, studied the painting of Old Masters, visited Spain. At the end of 1915 he returned to Petrograd, exposed his paintings Fisherman, Violinist and some portraits at the exhibition of the group Mir Iskusstva. Yakovlev’s works were subjected to criticism in art circles. His workmanship was highly appreciated, but at the same time he was accused of mannerism and eclecticism.

At the end of 1916 Yakovlev represented his works of 1913–1916 to the Soviet of the Imperial Academy of Arts (IAKh), which admitted only his graphic works and extended his pensioner trip for two years. However his trip was delayed because of the World War I. In 1916 Yakovlev taught drawing at the architecture courses of Bagaeva in Petrograd and at the New art studio in the Vasilievsky Island.

In 1916–1917 Yakovlev was engaged in easel graphic art and monumental painting. He participated in the design of the interiors of the art café Comedians’ Halt (“Prival Komediantov”) in Petrograd. He together with V. I. Shukhaev created plafond Nine muses in the estate of Firsanov in Moscow; he drew sketches to the murals of the orthodox Saint Nikolay church in Bari and to Kazan railway station in Moscow.

In 1917 Yakovlev together with D. N. Kardovsky and V. I. Shukhaev founded The St. Luke’s Guild of Painters in order to renew the traditions of the Old Masters. In the same year Yakovlev made a trip to the Far East, China, Japan and Mongolia at the expense of the Imperial Academy of Arts (IAKh).

In 1918 Yakovlev immigrated to France, lived in Paris. In 1920 Yakovlev’s works from the Far East were exposed at the exhibition in London and Paris. In 1922 publishing house of L. Vogel issued the album of Yakovlev’s works of the China period. It was limited edition, so called édition de luxe; it contained 50 pictures of the China cycle. In 1922 exhibition of Yakovlev’s and Shukhaev’s works was held in the gallery Barbazange in Paris.

In 1924–1925 Yakovlev took part in the advertising expedition of the company Citroen through the Africa. The route included the Sahara desert, Sudan, Niger, Chad, Belgian Congo, Mozambique, Madagascar and equatorial Africa. In journey Yakovlev created approximately 300 paintings and drawings about nature and life of the local population. In 1926 these works were exposed in the gallery Charpentier in Paris; they brought European fame and commercial success to the artist. Yakovlev was awarded the Legion of Honor.

Yakovlev also participated in the exhibitions of the Russian Art. His works were exposed in Paris (gallery Dancy 1921, gallery Bernheim 1927), at the Travelling exhibition in the USA and in Canada (1924–1925), in Copenhagen (1929) and others. In 1927 the group exhibition of Yakovlev, Shukhaev and B. D. Grigoriev was held in the Carnegie Institute in Pittsburgh. In 1928 Yakovlev’s personal exhibition was organized in Leningrad and was dedicated to the 15th anniversary of graduation from the Academy of Fine Arts. At the same time his works were exposed at the Russian section of the exhibition of modern French art in Moscow.

In 1928–1929 Yakovlev made a trip to Naples and Pompeii; there he studied painting of the ancient Rome. After the trip Yakovlev painted cycle of the stylized paintings about Naples mode of life; these works were exposed at the personal exhibition of the artist in the gallery Renaissance (1929).

In 1931–1932 Yakovlev participated in the expedition to the Asia, organized by the company Citroen; he visited Syria, Iran, Afghanistan, Mongolia and China. After expedition about 800 paintings and drawings were exposed in the gallery Charpentier in Paris.

Yakovlev worked a lot as a monumental painter and scene-designer. He created decorative panels for the central hall of the steamer Normandy (1935), murals of the concert hall in the Pergolese Street (1935, together with V. I. Shukhaev) and design of the hall in the Prince Yusupov hotel in Paris (1934). In 1934 Yakovlev designed the ballet Semiramida for the performances of Ida Rubinstein in the Grand Opera.

In 1939 the memorial exhibition of the artist was organized in the gallery Grand Central in New York. In 1988 the retrospective exhibition of Yakovlev and Shukhaev was held in the State Russian Museum and was dedicated to the 100th anniversary of the masters.

Alexander Yakovlev was one of the significant painters and graphic artists of the Russian art of the beginning of the 20th century. He was a representative of neo-academician style. In late 1900s he was interested in the impressionism. Yakovlev’s style and manner of painting were formed in early 1910s. Artworks by Yakovlev combined avant-garde and classic styles; he tried to imitate and to use methods of the Old Masters. He attached more importance to graphic art; his favorite technique was sanguine.

The Yakovlev’s art manner of painting is very similar to the V. I. Shukhaev’s one. Contemporaries called them the brothers-twins. There is a problem in determination and dating of Shukhaev’s and Yakovlev’s works.

Works by Alexander Yakovlev are in many museums of Russia and abroad, including the State Russian Museum, the State Tretyakov Gallery and the Pushkin State Museum of Fine Arts.