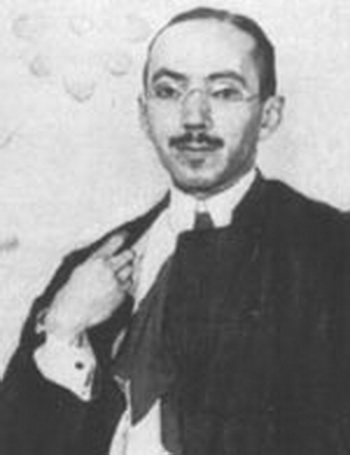 was a military engineer. In 1896-1903 he studied at the St. Petersburg Academy of Arts, initially at the architectural office, then - the sculpture at GR Zaleman and VA Beklemisheva. In 1903 received the title of artist and sculptor for a group of "prisoners". In 1903, together with BM Kustodiev made a trip to Novgorod for the study of ancient art, remain the focus of his interest in lifelong learning. In 1904, several months he lived Paris, where he attended the Academy Julien.

In 1903-1913 he traveled in the old Russian towns and monasteries. His interest in icons and religious paintings, he has expressed, not merely repeating and varying images, but also copying the methods of medieval artists: mixed colors on the old recipes, avoiding chemical additions. Therefore most of his paintings and watercolors do not contain pigments which are used by artists of the first third of the twentieth century (for example, the surface of his watercolors are almost always dull, not shiny).

In St. Petersburg Stelletskii created polychrome sculptural portraits, mostly of plaster or wood, was engaged in decorative sculpture, porcelain. In 1905-1906 he worked for the Russian satirical magazines. In 1906, created a series of illustrations for the "Lay", which later on the recommendation of the Serov were bought by the Tretyakov Gallery. In 1907, together with Kustodiev traveled to Italy. In 1908-1909 performed sketches of costumes and scenery for productions of "Tsar Fyodor Ivanovich" AKTolstoy for Alexandrinsky theater, "Snow Maiden" by Rimsky-Korsakov for the Mariinsky Theater. However Golovine and Ivan Bilibin worked on the creation of costumes for the opera "Boris Godunov" by Mussorgsky for non-repertory SP ; Diaghilev, delivered at the National Opera House in Paris in 1908. In 1909, also commissioned by Diaghilev designed the opera The Maid of Pskov by Nikolai Rimsky-Korsakov.

Stelletskii In 1914 he moved to France and settled in Paris. He continued to work hard as a painter, sculptor and set designer. However, little success accompanied by the artist in exile. Without wishing to participate "in the theatrical representation of the sacred text, Stelletskii in 1915 refused to order costumes for the ballet" Liturgy "(later sketches were written Natalia Goncharova), which is supposed to put the music of Diaghilev Stravinsky (composer also refused to participate, staging was not implemented). Largely because of these differences started even stopped in St. Petersburg collaboration with Diaghilev. Do not place the cooperation with the theaters Grand Opera in Paris and La Scala in Milan, on which Stelletskii also expected. Personal exhibition at the Paris gallery "hits" in 1921 went unnoticed, no work with her was not sold. Failures can be attributed partly to the nature of the art masters, is closely associated with the ancient culture that could not find a response in European art circles. Mastery Stelletskii, by contrast, is widely used. The artist had worked as monumental. It is decorated private villas in the south of France, painted a church camp for the Russian fighting on French territory. In 1925, created the mural in the church and the iconostasis of the St. Sergius monastery in Paris. In 1926 - the scenery for the play "The Rite Russian wedding" put on the explanation of the opera Glinka's "Ruslan and Lyudmila" at the Theater "Die Fledermaus" and "Madeleine" in Paris.

In recent years, blind. He was buried at the Russian cemetery of Saint Genevieve de Bois.