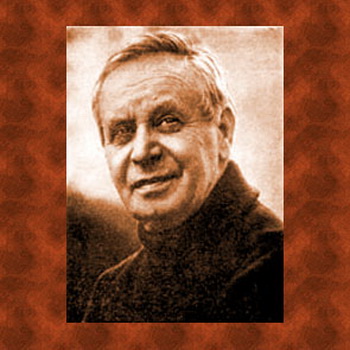 born in a family lawyer. In 1920-1924 he studied in Moscow at VHUTEMAS VA Favorskogo, SV Malyutina, VD Falileeva. As a student, he worked in the magazine charts, collaborated with the magazines "Soviet Screen", "Krasnaya Niva", "Spot».

In 1927, together with AD Goncharov has designed the staging of "The passion of Mr. Marapita" KA Davidovskaya in 4-th Moscow Art Theater School, later engaged in a lot of theatrical decorative art.

In 1928 traveled to Germany and Italy. In 1931 joined the association "Izobrigada. In 1932-1933 created the illustrations for the novels of Dostoevsky's "Idiot" and "The Brothers Karamazov". He created costumes and scenery for productions of "Professor Mamlok" F. Wolf in Theater. DEFRA (1935), "The Stepmother" by O. de Balzac in the Theater-Studio im. Yermolova (1936), "Cola-Bryunon" DBKabalevskogo in the Leningrad Maly Opera Theater (1938), "Simple Heart" K. Paustovskiy ( 1940), "Wolves and Sheep" by Alexander Ostrovsky in the Maly Theater in Moscow (1941) and many others.

During the Great Patriotic War, remained in Moscow. In 1943, completed design a production of Cyrano de Bergerac "E. Rostand in the Theater. Lenin Komsomol. For the scenery for productions of "For those who are in the sea" B. Lavrenev at the Maly Theater (1946) and "The Steppe broad" N. Vinnikov in the theater of the Soviet Army (1949) was awarded the USSR State Prize. Also collaborated with the theater of it. Vakhtangov ( "Christmas Night" AK Gladkov, 1945), the Moscow theater named. Alexander Pushkin ( "Shadows" ME Saltykov-Shchedrin, 1953), Leningrad Theater of Drama. Alexander Pushkin ( "The years of wandering" AN Arbuzov, 1954), the Bolshoi Theater ( "Pagliacci" Leoncavallo, 1957) and many others.

in 1961 created the costumes and scenery for the ballet "The Snow Maiden" Tchaikovsky for the London Festival Ballet. In 1962 solo exhibition was held Pimenova in India. In the same year elected a member of the USSR Academy of Arts. The most famous post-war cycles scenic artist owned works "things every day" (1959) and "New Quarters" (1963-1967, awarded the Lenin Prize in 1967), imbued with the lyrical mood and very accurately reflect the era of the "thaw". Written a book of essays "The Art of Life or" The Art of Nothing "(1960), No Ordinary Ordinary" (1964), "New Quarters" (1968).

In 2003, the Moscow Museum of Modern Art held a retrospective exhibition of paintings to mark the 100 anniversary of his birth.

Yuri Pimenov - one of the greatest masters of Soviet art. He had an excellent vocational school: entered into VHUTEMAS when they taught VE Tatlin, Kasimir Malevich, Rodchenko, VV ; Kandinsky, PV Kuznetsov, VA Tabor. In the early, "OSTovsky" Pimenov period of creativity in their desire to display modernity in its dynamics, has been influenced by German Expressionism. For his work this time is characterized by monumental compositions permeated by the rapid movement, sharp angles, asceticism color solutions. Since the beginning of 1930 turned to genre painting, landscapes and still lifes, make up your own style of writing small, translucent strokes, creating the effect as if the vibrating surface of the paintings. The main objective of his work considered approval of the poetics of Soviet reality in its everyday life.