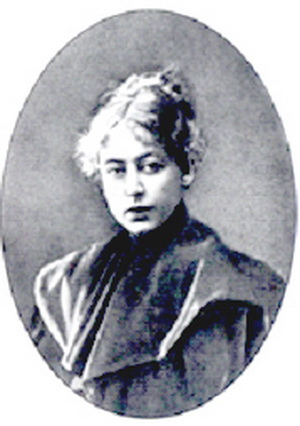 His father belonged to a merchant family Yakunchikovyh, the mother - to a sort Mamontov. He spent his childhood in Moscow, and the estate of parents Vvedenskoe near Zvenigorod. The first drawing skills gained in N. Martynov.

in 1884-1889 was volnoslushatelnitsey MUZhViZ, studied in E. Sorokin, Vladimir Makovsky, IM Pryanishnikova, V. D. Polenova. In 1886 the family moved closer to Polenov, attended the evening drawing in their house, entered the organized ED Polenova circle to study the historical and archaeological monuments of Moscow. Summer 1887 and 1888 held at the dacha Polenov in Zhukovka under Mytischi and Morev under Ruzoy. Carried away a wooden toy, embroidery, tapestry, applique, majolica.

In 1888 the artist was found in tuberculosis. At the insistence of doctors had to change the climate. Moved to Europe: first in Italy, and a year later in Biarritz in France. Summer 1889 held in Normandy, in 1892 worked in Brittany.

From 1889 she lived mainly in Paris. Attend a private academy R. Julien, where she studied with A. Bouguereau and T. Robert-Fleury. In 1892-1893 attended the workshop Rolshavena. Mastered the technique of color etching. In 1894, he withdrew his own studio and began working independently. He exhibited his works at the Paris Salon. In Russia, visited only occasionally - for the summer of 1891, 1893, 1895, 1899. During his visits to Russia to work in Abramtzevo in ceramics and furniture shops.

In 1896 she married a medical student at the Sorbonne L. Weber. Has had two sons.

In 1898 was invited to SP Diaghilev to participate in the association "World of Art". He has designed the cover of the journal in 1899. From 1899 to 1902 permanent exhibitor show "World of Art". Took active part in organizing Handicraft Department of the Russian pavilion at World Expo 1900 in Paris. Was awarded a silver medal for the projects of furniture and embroidered decorative panels "The Girl and the devil" made under the guidance of artist workshops Abramtsevo.

Yakunchikovoy In 1901, the disease worsened, with his family, she moved to Chamonix, and then in the Shen-Buzheri, where he soon died. Diaghilev published in the journal "World of Art" (1902, № 12) obituary. Memorial exhibition held in 1905 in Moscow, in 1910 - in the Rath Museum in Geneva. In 2002, the 100-anniversary of the death Yakunchikovoy, organized a retrospective exhibition at the Museum-estate VD Polenova in the Tula region.

works of the artist is stored in the collections of the State Tretyakov Gallery, State Russian Museum, Pushkin Museum im. Pushkin Museum-Estate VD Polenov. Considerable part of her heritage is from the heirs of the family Weber in Switzerland.

Creativity Yakunchikovoy had a marked influence on the formation of Art Nouveau in Russia, particularly in the Russian arts and crafts.