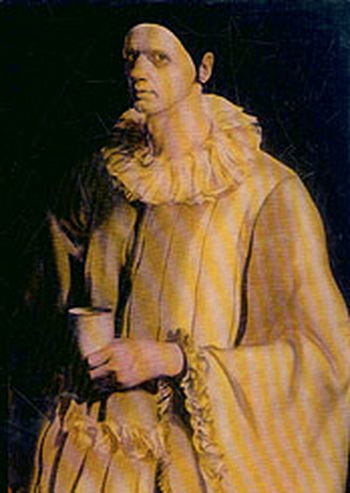 Shukhaiev came from a peasant family. Early left an orphan, but thanks to a small inheritance from his grandfather in 1897 enrolled in the class of coinage of the Stroganov School. He studied at the II Nivinsky, S.-W. Noakovskogo, Korovin. Graduated in 1906 with the rank of scientist draftsman. In the summer of that year arrived in St. Petersburg. After private lessons in the studios of SM Dudin, NN Gerardova, VI Bystrenina, AD Skalon entered the Academy of Arts. He studied at the DN Kardovsky, VE Savinskoye, GR Zaleman, JF Tsionglinskogo. He made friends with AE Yakovlev. Creative writing, the temperament of both artists were so close that their work sometimes indistinguishable. In 1911-1912 wrote a painting competition for the title of the artist "Bacchanalia", for which he received from the Society for the Promotion of young artists in Rome entitled to two-year pensionerstvo in Italy. In 1913-1914, together with Yakovlev (retired St. Petersburg Academy of Arts) traveled to the cities of Italy.

Following the announcement of the First World War, he returned to Petrograd. Played a lot of portrait sanguine sketchbook for a large group portrait of officers of the Life Guards Lancers ( "Polk at positions"). In 1915 he exhibited his works at the exhibition of the New Society of Artists. Since 1917 - member of the association "World of Art". I turned to the monumental painting. However, Yakovlev completed ceiling "Nine Muses" in Moscow mansion Firsanovyh; on the proposal Shchusev worked on paintings of the Orthodox Church of Nicholas of Myra in Bari, as well as a waiting hall of the Kazan station in Moscow (not implemented).

Since the autumn of 1915 he taught at New art studio, in 1916 - to architectural courses Bagaeva in Petrograd. In 1918 he taught at the Petrograd State of free art workshops. He created costumes and scenery for the opera by Richard Wagner "Das Rheingold" for the People's Palace in Petrograd, and K. Miklashevksy comedy "Four lady" for the Maly Drama Theater in St. Petersburg (staging not performed). Participated in a festive decoration of Petrograd to the first anniversary in October.

Since 1922 he lived permanently in Western Europe, mainly in Paris. In 1924 participated in the exhibition of Russian art in New York. In 1924-1925 He has designed several theater productions, cabaret NF Baliyeva "Die Fledermaus": "Country Picnic in the deep Russian provinces," "Village Festival", "Arrival in Bethlehem", "Stepan Razin" and other . Largely thanks to costumes and decoration, executed from sketches Shuhaeva, "Die Fledermaus" had great success in Paris, London and New York. He taught at the Russian Academy TL Sukhotin-Tolstoy, in his studio in Montparnasse.

In 1920 Shukhaiev worked as a portraitist, painter, book illustrator, muralist. Painted the interior of the "Russian House", a cabaret and restaurant in Paris. In 1928-1929 traveled to the south of France and Corsica in 1930 - to Spain and Morocco. In 1932 performed a series of cartoons for the magazine Vanity fair.

In February 1935 he returned to the Soviet Union, he settled in Leningrad. He taught at the Institute of Painting, Sculpture and Architecture in the All-Russia Academy of Arts. In 1936 in Leningrad, then in Moscow were organized large retrospective exhibitions Shuhaeva.

In 1937 he was arrested and exiled to Magadan, where he worked sporadically over the design of performances and a concert for the musical-dramatic theater. In 1947 was released, settled in Tbilisi, becoming a Professor of the picture at the Tbilisi Academy of Arts. In 1962 awarded the title of Honored Artist of the Georgian SSR.

Creativity Shuhaeva represented in the collections of the State Tretyakov Gallery, Pushkin Museum im. Pushkin in Moscow, State Russian Museum in St. Petersburg, the Luxembourg Museum in Paris, the Brooklyn Museum in New York. Much of the work of the Paris period is stored in the Western European and American collections.

VI Shukhaiev, like his close friend and colleague, Alexander Yakovlev, is the most consistent representative of the direction of neo-classicism in Russian art. He has worked and achieved success in many kinds of art, but is primarily known as a brilliant draftsman. In particular, expressive of his drawings sanguine. In seeking to chart its similarities with the Studies of old masters, Shukhaiev often deliberately left visible the process work. Figure tinkering with his finger, repeating several times the contours, wiping the failed line, sharpening on the leaf surface sanguine rod, he created the impression of "rough figure", although the majority of his graphic works are fully completed, machine-nature. Individual style of the artist, established in 1910's, had changed little throughout life, which complicates the dating of his drawings. Relatively easy to date back only the work of the Tbilisi late period of creativity, which, unlike the sheet 1910-x - 1930, Shukhaiev sought to compositional completeness: more careful attention to detail, filling the entire surface of the sheet. An important problem is the differentiation nepodpisnyh work Yakovlev and Shuhaeva, also mostly graphics.