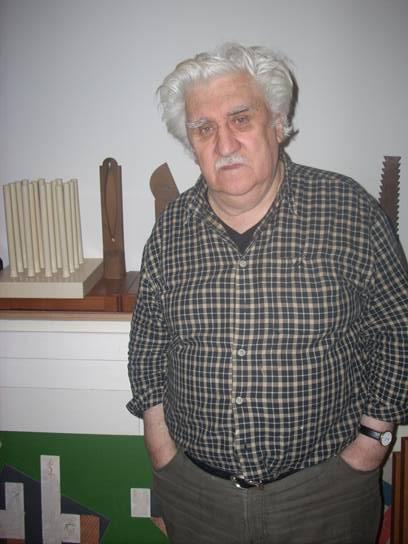 Vladimir Nemukhin studied painting and drawing at the studio of P. E. Sokolov since 1943 and at Moscow art studio under the All-Union Central Council of Trade Unions (VTsSPS) in 1943–1946.

In 1957 Nemukhin entered Moscow State Art Institute named after V. I. Surikov, but later he was expelled from the Institute.

Since 1958 he was a member of Moscow joint committee of graphic artists (MOKKhG).

More than 20 personal exhibitions of the artist were held in different cities, including the exhibition at the I. V. Kurchatov Institute of Atomic Energy in Moscow in 1984, and the exhibition in Jersey City in the USA in 1986 and many others.

“After short period of art experiments in abstract expressionism in 1959–1962, Nemukhin has returned to figurative art; he has found his own recognizable style — semiabstract still-lifes with playing cards. The playing cards were often painted, but sometimes were glued by the artist to the surface of a canvas. It could be only one playing card — ten or two — on the canvas, or hundreds of them, but they always created fanciful play of colours. The colour is a main thing in the works by Nemukhin. The speckled drawing of patience with playing cards of every stripe gives scope to new search of colour palette, doesn’t it?” (L. Kropivnitsky, 1965).

The artist created many variations of his theme with playing cards; surface of canvas often resembled surface of gaming table with specific texture.

In recent years, Nemukhin began to create sculptures, alongside with cycles of paintings and drawings.

The artist’s book Nemukhin’s Dialogues (thoughts of the artist noted by M. Uralsky) was published in 1999.

At the end of 1990s Nemukhin lived in Düsseldorf in Germany.

At present the artist lives and works in Moscow.