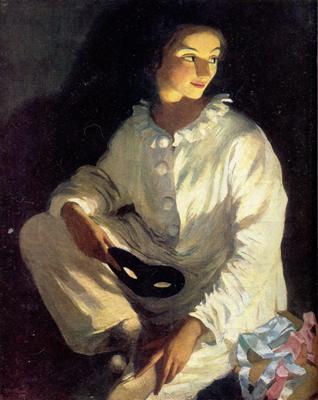 grew up in an artistic family: his father - Eugene A. Lancere - sculptor, his grandfather - Nicholas L. Benoit - architect, brother - Evgeny Lancere and uncle - Alexandre Benois - artists. In 1886, after his father died, she moved to St. Petersburg in the house his grandfather.

graduated Kolomna female gymnasium in St. Petersburg. In 1901, he briefly attended art school princess Tenisheva. In 1902-1903, visited Italy. In 1903-1905 worked in the studio of Osip Braz in St. Petersburg. Copied the works of old masters in the Hermitage. Held every summer in Neskuchnii, where did his first work. In 1905, she married Boris A. Serebryakov, a railway engineer. Had four children (Eugene, born. 1906, Alexander, born. 1907, Tatiana, born. 1911, Catherine, born. 1913).

In 1905 went to France. Attended Academy Grand Shomer in Paris. She studied the art of old masters in museums in Paris, copy pictures A. Watteau, F. Mercier, O. Fragonard. In 1906 returned to Russia. She lived almost continuously for several years in St. Petersburg, and fun. Since 1910 participated in exhibitions. Her work "In the toilet", exhibited at the Contemporary Portrait of a Woman "in 1910, was acquired by the Tretyakov Gallery. In the same year took part in the VII Exhibition of the Union of Russian Artists ". Since 1911 - permanent exponential association "World of Art". In 1911 and 1913 traveled to the Crimea. In 1912-1913 she lived in Tsarskoe Selo near St. Petersburg. In 1914 he traveled to Italy and Switzerland. In 1915-1916 worked on sketches of murals Kazan station in Moscow on the theme: India, Japan, Siam, Turkey (not implemented).

in 1965-1966 in Moscow, Leningrad, Kiev and Novosibirsk, and in 1987 took place in Moscow large retrospective exhibitions Serebrya.

The artist died at the age of eighty-two years and was buried in the cemetery of Saint Genevieve de Bois, near Paris.

Creativity Serebryakova can be attributed to the direction of neo-classicism in Russian art, the most consistent representatives of which were Alexander Yakovlev and Basil Shukhaiev. The origins of art Serebrya - a Russian peasant genre Alexei Venetsianov and Italian masters XIV-XVI centuries.

Serebryakova left a significant legacy of paintings and drawings, which are predominantly located in the collections of local museums (the State Tretyakov Gallery, Pushkin Museum im. Pushkin State Russian Museum), as well as in private meetings.