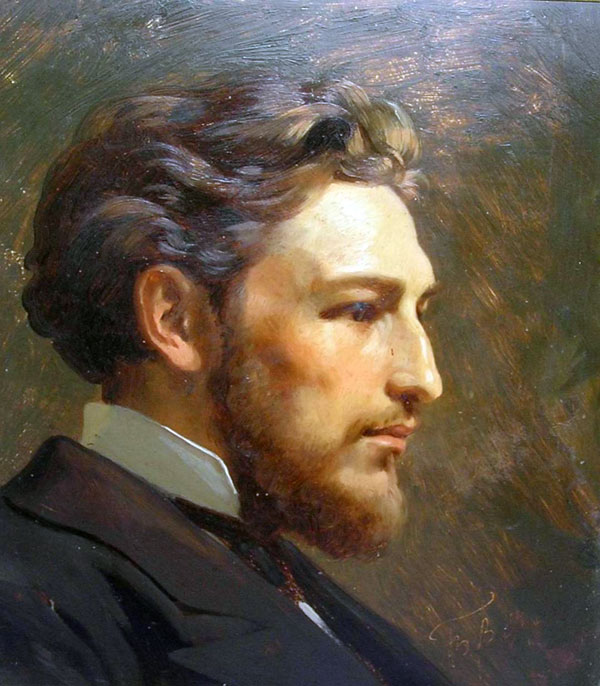 In 1872 he entered the Imperial Academy of arts in the Department of historical painting, where he studied under the guidance of professors В. П. Верещагина, П. П. Чистякова and П. М. Шамшина. During the period of training received all existing academic awards: in 1875 — two small silver medal for drawing and sketch from nature, 1876 — two large silver medal for drawing and sketch from nature, in 1878 — a small gold medal for the program "Abraham expels Hagar from the house with her son Ishmael". In 1879, for the painting "the Adulteress before Christ" (at present the painting is exhibited in the Latvian national Museum of art entitled "Christ and the sinner") was awarded a large gold medal, the title of class artist 1-й degree and got the right for pensioner's trip abroad for a period of four years.

in the Fall of 1880 went abroad with Л. Р. Веселовским and И. Л. Аскназием. Visited Dresden, Vienna, Munich and Paris, where in 1881 the six months he attended lectures and worked in the Studio of the famous French painter Leon Bonnat. After visiting Florence he continued to work in Rome together with И. Ф. Селезневым, С. В. Бакаловичем and Ф. А. Бронниковым. During her internship, wrote of the work: "in Front of the grave of the Martyr", "Porton", "in Front of the tomb of the parents", "Ave Maria", "terrace on the sea", "On the beach"; 5 etudes — "Girl with pigeons", "Mother with child", "Head Italian", "terrace", "the Chapel on the island of Capri". According to the results of a pensioner's trip in 1884 was awarded the gold medal for the painting "the Burial of a Christian Martyr in the catacombs of Rome."

After the trip left at the Academy of arts, in 1885 awarded the title of academician and in the same year on the recommendation of the Academy appointed as Director of the drawing school of the Odessa society of fine arts. Together with К. К. Костанди, Г. А. Ладыженским and other artists changed the system of education in the Odessa school.

In 1900 appointed Director of the Art school (1909 — Art school. Grand Duke Vladimir Alexandrovich of the Odessa society of fine arts), created by the Academy of arts at the Odessa drawing school in connection with the successful training in her artistic shots.

April 2, 1915, was elected a life member of the society of architects-художников at the Academy of Arts.

In 1917, after the dissolution of the Imperial Academy of arts, has resigned, but has taught drawing and painting until his death in August 1919.

Being busy with the organization of educational process and teaching the rest of the day fulfilled orders for portraits of Royal personages and the image for the iconostasis of churches. For the Church in their homeland was written as a gift "the last supper" size 2,25 х 6 meters. Enchanted views of the Odessa coast, he painted many seascapes in different seasons, in particular the series of paintings "Sea ice". Also wrote a few genre works, one of which — "In the absence of the gentlemen" — is located in Odessa art Museum.

paintings are in museums of Riga, Odessa, Nikolaev, etc., in private collections of Russia, Ukraine and far abroad.

the Editors AI thanked the great-granddaughter А. А. Попова Olga Suchankova (St-Петербург) for the provided material and assistance in the work on the text.