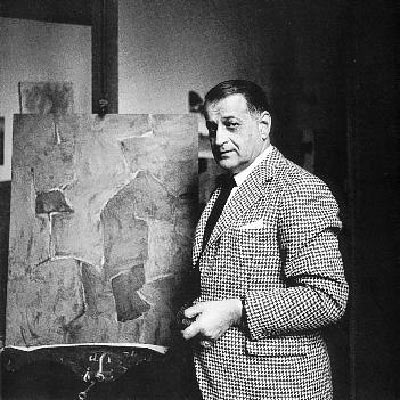 born in the family stud farm owner, was the thirteenth child in the family. He spent his childhood in Moscow and St. Petersburg, where he received basic music education. In 1919 went to Constantinople with his aunt, a famous singer Anastasia Polyakova. A few years accompanied her on guitar during performances across Turkey, Bulgaria, Germany and Austria. In 1923 he settled in Paris. Until the late 1930's he worked in the cabaret.

In 1929, carried away by the art, began to attend classes at the Paris Academy of Frosch and Grand Shomer. In 1933-1937 he studied at the Slade art school in London.

in 1931 exhibited his work in the gallery "Druon" and earned rave reviews from the press. In 1932 exhibited in the Salon of French artists, in 1935 - National Salon of Fine Arts.

In his work Polyakov first varied academic traditions, finding the reasons for the paintings in real life. After 1935 he gradually moved from figurative painting to abstraction. This path is largely determined familiarity with VV Kandinsky in 1937, and friendship with Sonia and Robert Delaunay.

Despite the active exhibition activities, was able to completely abandon the earnings pop musician until 1952, when term contract with the Parisian gallery "Bean". In addition to painting often turned to the technique of collage and color lithography. In 1957, in an abstract manner designed the ballet "Counterpoint" M. Constant.

In 1947 he was awarded a prize Kandinsky. Works Polyakova repeatedly received awards at the International Biennale: in Italy (1955), Tokyo (1965), Menton (1966, Grand Prix). In 1962, took French citizenship, soon becoming an honorary member of the Academy of Arts and Letters. In the same year received at the Biennale in Venice, your own room.

In abstract painting Polyakov developed his own recognizable style: his paintings are built on contrasts of major fancifully outlined geometric patches of color. The artist uses warm reddish-yellow, golden tone. Attaching great importance to color, he sought to create their own colors, specially preparing and mixing pigments, as well as paying considerable attention to the beautiful texture. His later paintings 1950 - 1960 more restrained monochrome and color one.

creativity of the artist is represented mainly in foreign collections, including the Museum of Modern Art in Paris and New York.