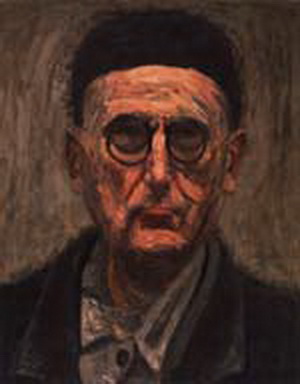 Serge Charchoune was born to a merchant family. He finished the Commercial school in Simbirsk. Then he tried to enter Kazan Art School, but failed the examinations. In 1910 Charchoune moved to Moscow, studied in the private studios of I. I. Mashkov and K. F. Yuon. He met M. F. Larionov, N. S. Goncharova, O. V. Rosanova, A. E. Kruchenykh and other representatives of the Russian avant-garde. In the same year Charchoune was called up for military service. In 1912 he deserted, he took to flight through Warsaw and Berlin to Paris.

Serge Charchoune continued his art education in the M. V. Vasilieva’s Russian Academy, later — in the Palette Academy. He studied under the guidance of J. Metzinger, D. de Segonzac, and H. Le Fauconnier. In 1913–1914 Charchoune exposed his cubist paintings at the Salon of Independents in Paris.

At the beginning of the World War I, Charchoune moved to Spain. He settled in Barcelona. He was interested in Dadaism movement. He began to paint in abstract-geometric style. In 1916–1917 the first personal exhibitions of Charchoune were held in the gallery Dalmo in Barcelona and were visited by the leaders of the Spanish Dadaists A. Cravan and F. Picabia.

In 1917 Charchoune returned to Paris. Picabia advised him to organize the personal exhibition in the Library of Forney. In early 1920s Charchoune exposed his artworks at the Salon Dada and the Salon of Independents. He met M. Duchamp, T. Tzara, J. Arp, and M. Ernst. Charchoune participated in all manifestations of Dadaists in Paris.

In 1921–1923 Serge Charchoune lived in Berlin; there he met many representatives of Russian culture, who lived in emigration. He published the shocking pamphlet Blind brain. Transportation Dada (1921) in Russian language. He also took part in the Russian Art exhibition in the Van Diemen gallery (1922). In the same year the personal exhibition of Charchoune was held in the gallery Der Sturm (“Storm”).

In 1923 Charchoune returned to Paris. He was an active member of the group Cherez (“Through”). In mid 1920s he left Dadaism. He began to paint in ornamental cubism style, combined figurative and non-figurative elements with geometric forms.

In late 1920s Charchoune became poorer because of the economic crisis; he had to sell his still lifes and landscapes from nature in order to earn money for living. In 1930s–1940s Charchoune rarely participated in exhibitions. In 1935 he took part in the exhibition of Russian painting in Prague.

Since 1942 Serge Charchoune rented studio La Cité Falguière in Paris. The new period of art life of the painter began in mid 1940s. He turned to the non-figurative art. For the first time the main subject of his abstract paintings were water and the sea. In 1950s–1970s water gave place to the music. Charchoune regularly exposed his works in the Paris galleries. His personal exhibitions were held in Montreal (1957), Copenhagen (1959), New York (1960), Milan (1962), Venice (1962), Dusseldorf (1963), Luxemburg (1967, 1970–1971), Geneva (1967, 1971). However Charchoune obtained world recognition only in the last years of his life, after his retrospective exhibition in the National Museum of Modern Art in Paris in 1971.

In 1950s–1970s Charchoune was engaged in graphic art. He illustrated and designed the books Letters of Jean Bauret and Panorama général by P. Lecuire, My Faust by P. Valery, Abracadabra — Serge Charchoune and others. In early 1970s he made a trip to the Galapagos Islands. After the trip he created a series of paintings.

Along with painting, Charchoune was engaged in literature.

In accordance of his own wish Charchoune was buried in the Russian cemetery Sainte-Geneviève-des-Bois near Paris.

Memorial retrospective exhibition of Charchoune’s art was held in 1976 in the gallery Seine in Paris. For a long time his paintings were unknown in Russia. In 2006 exhibition of his works was organized in the State Russian Museum in St. Petersburg and in the Museum of private collections under the Pushkin State Museum of Fine Arts.

Works by Serge Charchoune are in many private and museum collections, including the State Tretyakov Gallery in Moscow, and in the National Museum of Modern Art in Paris. The biggest part of his artworks is kept abroad.