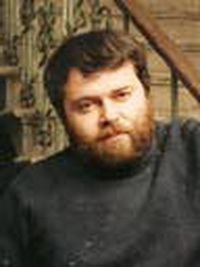 Art as the puzzle of the nature of good and evil - it is thought that troubled artist. His paintings are not removed from the world - they are the fruit of the soul suffered a lot man. This is a form of high tragedy, when the suffering comes from the harmony.

Since 1923 he lived and worked in Moscow. In 1932 entered the Moscow Art School in memory of 1905. At that time there taught MK Sokolov, will further influence the fate of the creative artist. Education was interrupted by arrest in 1934.

studied at the Moscow State Art Institute. VISurikova, during the war evacuated to Samarkand. It worked A. Labas, V. Ufimtsev Osmerkin (1943-1949).

Pictures Tabenkin until the early sixties, written in the spirit of the traditional landscape of the Moscow school.

« Tabenkin not included in the youth (mostly Jewish) community, which originated in the non-conformist art: belonging to the previous generation, he was by nature is less prudence, sarcasm, less aware of himself an intellectual than appeared at that time dissidents. Social rebellion and dominant position in the culture has never been his goal - one only art ... »(Leo Tabenkin).

In the 1960 Tabenkin abandoned the traditional art and created the first formalist work, where the dominant color, but not the form. In 1970 formed a unique style master, reflecting his philosophical views. He wrote, still lifes, figures made of plaster, clay and papier-mache. According to the memoirs, the artist valued above all the mystery - what makes art into art. Still life Tabenkin - it is always a parable. Here and in the Judean desert landscape, and the dialogue of men and women, and the first cry of the child. Every thing he can read, interpret, based on Sacred History, the pages of books read and the facts of the life of the author. Painting Tabenkin are often a visual expression of prayer.

in 2005-2006 were the artist's thematic exhibitions and publications about him.


Attention! All materials of the site and database of auction results ARTinvestment.RU, including illustrated reference information about the works sold at auctions, are intended for use exclusively for informational, scientific, educational and cultural purposes in accordance with Art. 1274 of the Civil Code. Use for commercial purposes or in violation of the rules established by the Civil Code of the Russian Federation is not allowed. ARTinvestment.RU is not responsible for the content of materials submitted by third parties. In case of violation of the rights of third parties, the site administration reserves the right to remove them from the site and from the database on the basis of an application from an authorized body.