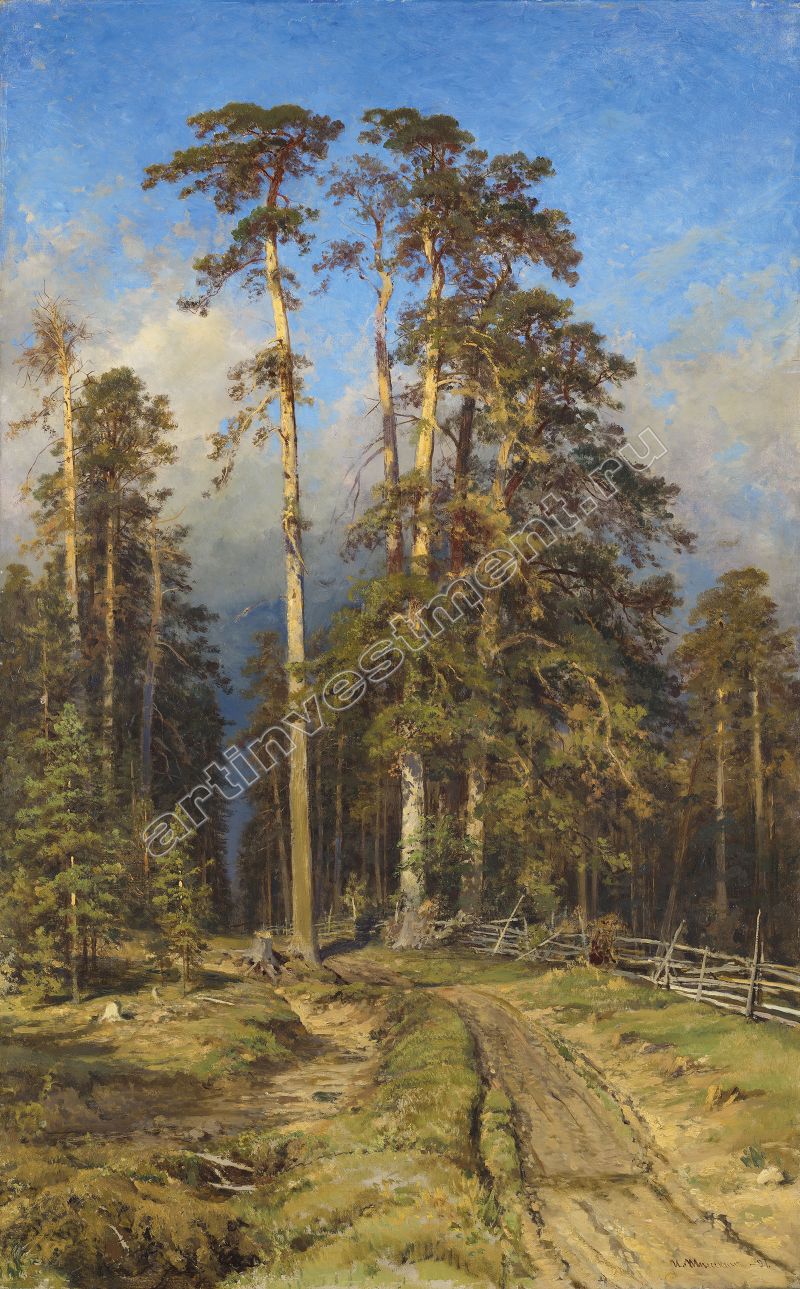 
Few artists grow from strength to strength in their careers, producing some of their finest work in their final years, but Ivan Shishkin was among this elite group. The scale and grandeur of the landscapes he exhibited in the 1890s is extraordinary, none more so than his famous Korabel'naya roshcha,1898 in The State Russian Museum, St Petersburg (fig 2). The numerous orrespondences in composition and technique between the offered lot and this well-known masterpiece, painted only a year later, make this one of the most important works by Shishkin to have appeared at auction for several years.
A variant of the present work was exhibited in the 1899 Peredvizhniki exhibition, titled Sukhostoi, and is subsequently recorded as being in the collection of the Imperial Academy of Arts. There are some minor but key differences between these two paintings: the figure of the old woman leaning against the fence in the Peredvizhniki work is here replaced by a small fire; the two tree stumps on the left in the Peredvizhniki version are positioned differently, and so is the taller dead tree on the left. It was not at all unusual for Shishkin to repeat, rework and perfect a composition.
Excitingly however, these small variations allows us to state conclusively that the offered lot was the version
reproduced in the journal Zhivopisnoe obozrenie in 1899. Additionally, the journal notes that the present painting was exhibited in the memorial exhibition of three Peredvizhniki artists, Ivan Shishkin, Ivan Endogourov (1861—1898) and Nikolai Yaroshenko (1846-1898) – giants of the genre who all died in the same year. Finally, a painting titled Sukhostoi is also listed as no.3 in Shishkin's retrospective exhibition in Moscow in 1904, curated by V.Chekato; since the catalogue is not illustrated, we cannot presume which version was exhibited but it is entirely possible that it was the present work.
The strong trunks and bright canopies of the forest seem at first to be at odds with Shishkin's original title for the work.
But as so often with Shishkin's landscapes, particularly his later works, the title draws out the several allegorical
elements of the painting. The stump to the left of the central pine is perhaps the starkest juxtaposition of life and decay, echoed elsewhere in the left-hand leafless trees and brushwood, set against the new growth on the forest
floor and sunlit branches above. The track that stretches into the distance is a near-universal reference to the path of a man's life; the threatening clouds and darkness at the end of the track in contrast solemnly with the sunlit clearing of the present.
By this stage of his life Shishkin was so familiar with the idioms of nature that his moods and philosophies become
linked inextricably with the landscapes he painted. The present work shows 'The Bogatyr of the Russian Forest' as he
was called by his contemporaries, painting bogatyr-like pine trees at a time of gradual deterioration. As a statement of optimism and courage from an elderly man, the present work is among the boldest and most moving of Shishkin's career.
These motifs are signature elements of Shishkin's landscapes. The techniques employed in the present work are
equally characteristic: the preparatory drawing, the faktura, the free movement of the brush, his precise manner of conveying light and the palette which is typical of his later works. By the 1890s he had moved away from an obsessive Dürer-like interest in every blade of grass and the ripple of each piece of bark, but his landscapes are no less alive or powerful – if anything, they are more so.

As one contemporary critic put it in 1895, it is difficult to find a more fitting definition for Shishkin than 'A Poet of Nature', 'a poet, who finds beauty where an ordinary man would pass through unmoved and indifferent... The smoke
which drifts through the trunks of the pines in the distance, the bright patches of sky between the trembling branches – all of this speaks to his heart, illuminating the artist and viewer. You see that all of this lives, feels, smoulders and breathes under his brush and pencil' (V.Nemirovich-Danchenko quoted in I.Shuvalova, Ivan Ivanovich Shishkin, 1978, p.291).

We are grateful to Elena Nesterova of The State Russian Museum for providing this catalogue note.