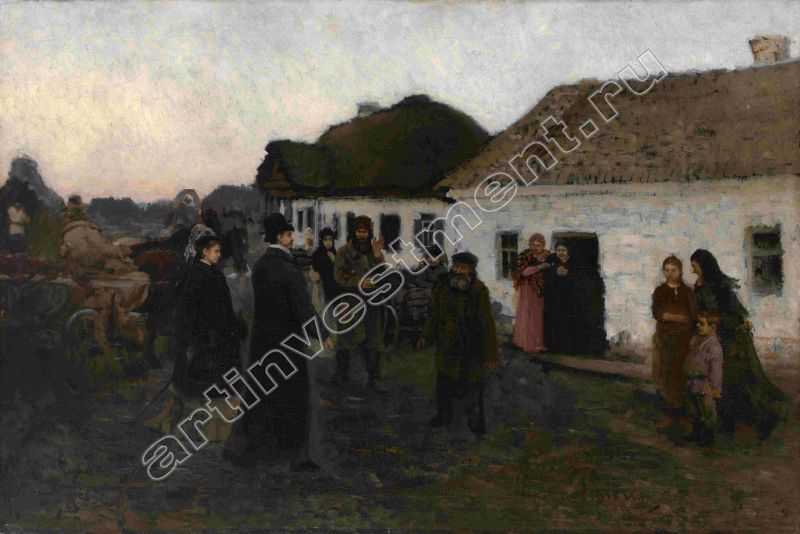 This enigmatic picture by Ilya Repin, although mentioned in literature, has until recently been out of sight of the general public and the art market. Yet this work symbolises a significant and sudden change in the biography of Repin who was discovering new directions for his art.

The picture shows the very first moment of the reunion between Repin’s elderly parents and their beloved son, who had left the paternal home 13 years before. In 1863, the 19 year-old had left Chuguyev for St Petersburg. He was ready to make the journey even by foot, driven by a desire to study at the Academy of Arts. Now, having spent almost three years in Paris and made Academician, he returned to his childhood town where his fascination with painting had started. With him is his young wife and somewhere behind her must be their two small daughters. Later their son, Yuri, would be born here. The family spent a year in Chuguyev. From there the 33 year-old Repin, full of ideas and plans, left for Moscow and then St Petersburg, where his pictures would cause major stir in Russia’s artistic circles.

The Repins had returned to Russia in early July 1876 and went first to the artist’s in-laws, who lived at a dacha at Krasnoe Selo. Here, Repin immediately began painting and drawing everything and everyone he saw; notably, he executed the exceptionally beautiful study On the Turf Bench. He passionately took in everything he had missed during three long years. He was overjoyed at meeting his family and friends, getting to know everyone anew, intently studying the changes in them. It was typical for Repin to express all his emotions through painting. Painting was for him the most direct route to learning, dialogue and insight.

Finally, the whole family moved to the Kharkov area and nearby Chuguyev, where they arrived on 1 October 1876. We can see in the painting what joyful commotion the appearance of these guests from the capital has caused in this small provincial town and how proudly Repin’s father comes out to meet his son and how his sick mother, remaining at the door and supported by a female helper, seems to be crying tears of joy. In the yard are many more people, curious to observe this very special event. Repin accurately depicts his parents’ house (now a museum dedicated to the artist), the yard and the next house along the yard, where he would soon set up his studio. This is where would paint the renowned work The Protodeacon, along with many other portraits and studies.

Having lived in Paris before, his head was probably spinning from what he saw around him. Many types and characters interested him, and this picture of his meeting with the parents has become an extraordinary testament to this, full of lyrical feeling, the immediacy of the artist’s experience and genuine love.
Elena Kirillina, Director of Research at Penaty,
House Museum of I. Repin
Returning Home by the renowned Russian artist Ilya Repin is not only exceptional in its artistic qualities, but also depicts an important event in the artist’s life, his long-awaited return to his parental home. Repin had not been to his native Chuguyev for almost thirteen years. First, he had studied for a lengthy period at the Imperial Academy of Arts in St Petersburg, before embarking on a three-year study trip abroad.

The painting has a very personal character. The artist must have been thinking many times about the reunion with his parents and transferred his imaginations onto canvas. At the same time, Returning Home is typical for the Itinerants. Russian genre painting of the second half of the 1870s, and especially the work of Repin, is concerned with the fixation of the moment and the realistic actuality of events, preoccupations which bring Russian art so close to real life. Repin was a master of conveying the characteristics and mood of the depicted figures. The artist was concerned with the emotionality of the reunion as well as the various attitudes — simple curiosity, indifference or euphoria. This is also apparent in another well-known picture painted a few years later, They Did Not Expect Him (1884, The State Tretyakov Gallery).