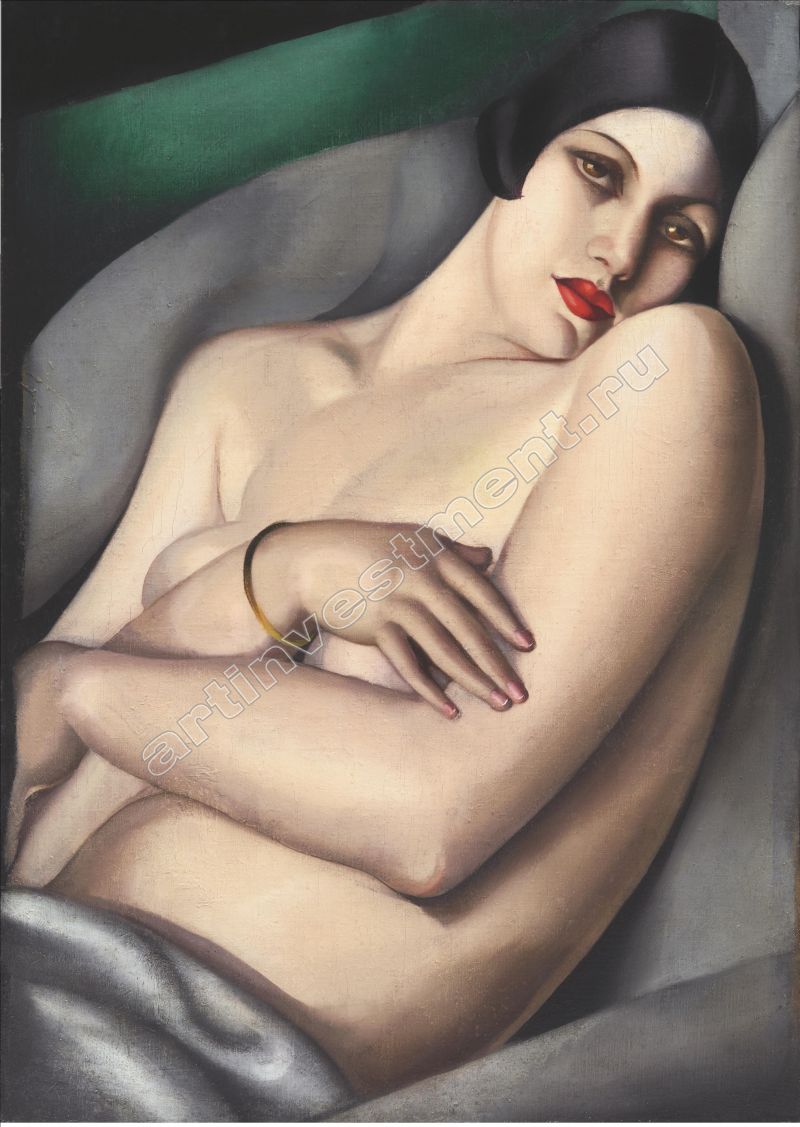 Masters and how their style profoundly impacted her art: "I discovered Italy when I was a youngster and my
grandmother took me away from the cold climate of Poland, where I was born and lived, to take me to the sunny cities
of Florence, Rome, Naples, Venice and Milan. It was under her attentive guidance that my eyes took in the treasures
of the Italian old masters, from the Quattrocento, the Renaissance" (quoted in Alain Blondel, op. cit., p. 22).
While much has been written about Lempicka's reverence for the old masters, equally important to her as an artist
were the aesthetic forces of her era, the most influential of which was the American film industry. Lempicka was
enthralled with the mystique of Hollywood, eventually moving there in the 1940s with her second husband, Baron
Kuffner. She invited film crews to her studio in Paris, where she staged grand entrances and posed for pictures with
all the theatricality and panache of a silent film star. One oft-repeated anecdote is that Lempicka was thrilled to be
mistaken once for the film actress Greta Garbo. The artist was enamoured by this type of modern glamour, and it is no
accident that the models in her portraits often resemble film icons from the early days of Hollywood. This platinum
bombshell, depicted in the nude and with brightly coloured lips and nails, calls to mind the passively seductive poses
of such 1920s and 1930s silver-screen legends as Louise Brooks (fig. 3).
As Patrick Bade explained in his monograph on the artist, "There is no doubt that de Lempicka herself was profoundly
influenced by the burgeoning art form of the cinema. In the 1920s as she formed her style, the great Hollywood
studios of M.G.M., Paramount, Columbia, Universal and R.K.O. began what has been termed the gold age of
Hollywood and their domination of world entertainment. The French and German film industries also enjoyed a golden
age of creativity, turning out many of the twentieth century's finest films in these years. The ubiquity of movies began
to influence the way people looked and behaved. De Lempicka's female subjects with their heavy makeup, perfectly
coiffed hair and their theatrical poses and facial expressions full of artificial pathos could have stepped out of the silver
screen" (P. Bade, Tamara de Lempicka, New York, 2006, p. 92).