Large galleries are reporting six-figure deals, the day after the VIP-открытия

Frieze New York — the second major art-ярмарка after Art Basel Hong Kong which of-за pandemic has moved online, — opened to VIP-предпросмотра yesterday, may 6, 2020. In this mode, the fair will run today. For wide Internet-публики it will be available from 8 to 15 may.

Despite the fact that the online version of Frieze New York was originally developed as an additional service a real fair in the Park Randall-Айленд in new-Йорке, today it — an independent event, in which 200 galleries presented to the audience by more than 1.6 thousand jobs. The advantages of online-интерфейса fairs, through simple sorting, for example, to learn that, unlike Museum collections, the gender composition of authors of the works presented at the fair, fairly balanced: 5 works-мужчин has 4 works created by women, and 31 work is the author sebenarnya (different from the gender distribution is strictly into men and women. — AI.) people; the most common form of art — painting, and the most common price category — to $10 thousand.

although the galleries representing the middle and lower price segments can not yet boast a large number of sales, major galleries have already started to announce the first major deals.

the Gagosian Gallery in the early hours of the fair and sold a large part of the work of Katharina Grosse, exhibited at prices from $43 thousand to $157 thousand

the gallery, David Zwirner, exhibition stand which presented 28 works of various authors, has also passed several large shopping — in particular, was sold painting by Susan Frecon for $400 thousand, four-part photographic work of Wolfgang Tillmans for $220 thousand and a few other works, whose price was not disclosed.

Pace Gallery, presented this time only young artists (some of them, it is only since January of this year), announced the sale of works of loie Hollowell and Nigel cook, valued at $250 thousand each, polyptych of Adam Pendleton's nine parts for $135 thousand, sculptures by Kohei Nawa for $75 thousand, etc.

Stars virtual showroom Acquavella Galleries were the work of Jean-Мишеля Basquiat, 1982 Untitled (Venus 2000 B. C.) for $5.5 million, the composition of Alexander Calder, 1953 for $3.8 million, the work of Keith Haring for $3.2 million, the picture of Wang Yan Cheng for $1.4 million, the work of URS Fischer for $1.5 million and collage by Richard Prince for $2 million of Its customers are also waiting for 11 works of Alex Katz, Andy Warhol, Leon Kossoff etc.

Transition completely to a digital format involved for the galleries with some difficulties — for example, it was unclear what information about the presented works, to what extent and in what format would be best to show to the public, however, expectations fair, especially given the results of the first day of work, remain quite positive.

the Material was prepared by Maria Kuznetsova AI 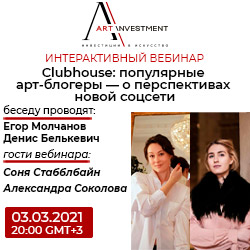