Portuguese scientists have argued that the Queen of Spain Isabella II, in 1855 Donated to Pope Pius IX fake painting Murillo, did it intentionally 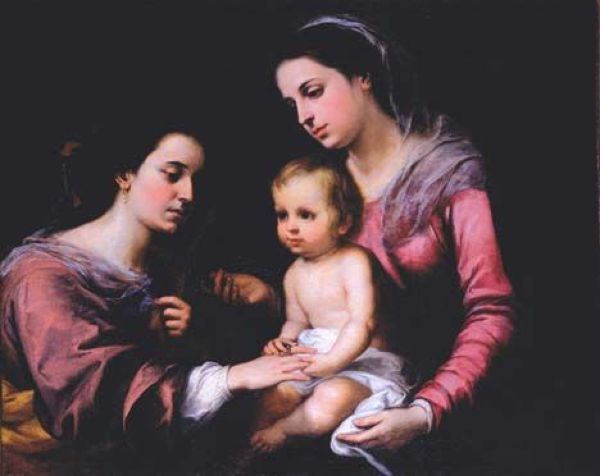 In 1855 the Queen of Spain Isabella II (1830-1904) gave Pope Pius IX a picture of the famous painter Bartolome Esteban Murillo (Bartolomé Esteban Murillo). Work called "the Mystical betrothal of St. Catherine", was later declared a hoax. Previously it was thought that Isabella did not know that the painting is a fake. But the Portuguese scholar Hugo Shaver (Hugo Xavier) recently stated that the Queen had deceived Pope deliberately.

the Researcher found an old album of photographs of paintings that were stored in the residence of the Portuguese kings. On one of the images depicts the very fabric of Murillo. The caption on the photo States that in 1865 king Luis I received the painting as a gift from Isabella. Incidentally, this mark left by none other than the monarch himself.

Now the original is in the collection of the National Museum of ancient art in Lisbon. He recently went to an exhibition of early works by Murillo, which holds the fine arts Museum of Bilbao. The curator of this Museum Benito Navarrete (Navarrete Benito) agree that in respect of Pope Pius IX Queen acted quite deliberately. According to him, Isabella didn't want to part with the cloth. But with Luis, she decided that the trick is not to repeat: if her deception was discovered, it would have broken out a big scandal, and Isabella wouldn't be with the hands: in those years, Spain has sought to strengthen relations with its Western neighbor.

with regard to the "Murillo", which entered the collection of the Vatican, in its authenticity, no one doubted almost a century. Only in 1958, the restorers found that the picture is a fake.