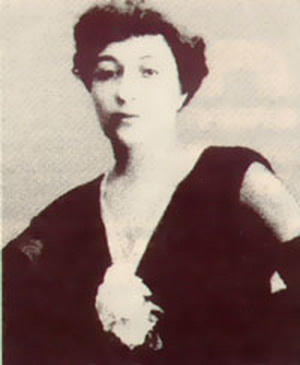 representative of the Russian and Ukrainian avant-garde. Founder of the Art Deco style.

In 1901-1903, in 1906, and in 1908 volnoslushatelnitsey worked at the Kiev Art School. During these years, organized in her home salon-shop that became a meeting place for representatives of the Kiev avant-garde art.

In 1907 Exter moved to Paris, where she studied at the Academy Grand Shomer and attended a class portrait Carlo Delvalya. During this visit, she had formed friendships with Picasso, Apollinaire G., J. Brack, M. Jacob and the Italian Futurists. From 1908 to 1914 she lived in different cities of Russia (Moscow, Kiev, Odessa, St. Petersburg), actively traveled through Europe, carried out regular contacts between Russian and European "left" artists.

In 1908, DD Burlyuk helped organize an exhibition in Kiev, "Link", and in 1914 - an exhibition "Ring". Since that time, participated in most of the most significant Russian avant-garde exhibitions in Russia. Exhibited his works at exhibitions of the Union of Youth "," Tramway V "," Wreath-Stephanos "and" Triangle "in St. Petersburg (all - 1910), the exhibition association" Jack of Diamonds "(February 1912),« № 4 "(Moscow , 1914), etc.

In March 1912, participated in the Salon of Independent in Paris. In the same year in Italy, met with artist-futurist Ardengo Soffici, and through him and with the leading avant-garde of this country, and also exhibited at their shows. In 1914 the work of Exter exhibited at the International Futurist Exhibition free.

Exter sought to introduce the principles of Cubism and Futurism in three-dimensional, real space. In the mid 1910-s one of the first she began to introduce a new style of art in fashion and home design, carried out various designs of dresses, shawls, tablecloths, thereby laying the foundations of art deco - the universally encompassing life direction.

early landscapes and still lifes Exter ( "ancient landscape", "City at Night", "Still life with eggs, everything - 1910) reveal a strong influence of French painting. The artist used the method of collage, which, together with the decorative features of Art is particularly noticeable in her non-objective works.

In 1915 Exter joined the group in Moscow, Malevich. Master of a very distinguished himself as an artist fully formed and fully devoted cubist woman.

Cubist style Exter used to create living things, implement it and applied arts, which at that time, too, was interested. A clear and successful attempt this experiment began its work in the Moscow Chamber Theater. The artist painted a theater lobby, created sketches of the curtain, got all the performances of the Famira Kifared "JF Annenskogo (1916)," Salome "O. Wilde (1917)," Romeo and Juliet "by W. Shakespeare (1921). Costumes and scenery Exter particularly impressive three-dimensionality, accentuated plasticity and sonority of color. Artist anticipated the principles of constructivist "biomechanics", subordinating the body of actors play the same rhythm.

After the revolution, Exter much engaged in teaching: in 1918 - in the Odessa Children's Art School, then in his own studio in Kiev. In 1921-1922 she taught in VHUTEMAS in Moscow. Among her pupils AG Tyshler, II Niwinski, Rabinovich, etc.

In 1923 the artist has issued I National Agricultural Exhibition, continued to invent designs for fabrics, in collaboration with the Moscow couture, where he developed projects of women's clothing. Exter was involved in creating forms for the Red Army. In her whimsical designs are made costumes for the film "Aelita" Ya Protazanov, which determined the style of films. In the drawings Exter reigns Volnoye game start. She did not try to adjust his or her work under the revolutionary ideology, it is free from total post-revolutionary utopianism "production art».

Abroad, she continued to engage in theater and arts and crafts. In 1924-1930 performed costumes for ballets BF Nijinska, E. Krueger, B. Romanov and others, in 1926 created the puppets, takes the form of dynamic "skulptozhivopisi", worked on children's books - pictures, decorative screens and ceramics.

In 1925-1930 at the invitation F. Léger taught at the Academy of Modern Art in Paris and gave private lessons in their own studios. Exhibited at numerous exhibitions.

In 1929 Exter settled in Fontenay-of-Rose.

In the early 1930 Exter began working on the creation of Les Livres Manuscrits-unique, hand-made books, each page of which is the author's autograph. Such books are made, usually one, sometimes three or five copies.

in 1972 hosted the first posthumous solo exhibition in Paris Exter publication catalog of her works, and in 2000 there is established the Society of Alexandra Exter, leading a lot of work to find and preserve the heritage of the artist, scattered in archives in the world.

In Russia, the first monographic exhibition of Exter organized in 1987 Bakhrushin Theater Museum in Moscow.