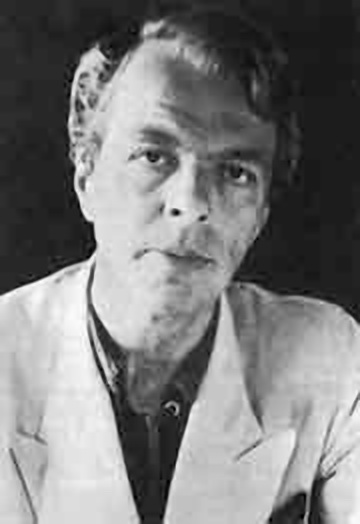 Boris Grigoriev was born to family of bank manager. In 1903–1907 he studied in the Central Stroganov School of Industrial Art in Moscow. Till 1913 he attended as a noncredit student St. Petersburg Academy of Arts. His teachers were A. A. Kiselev and D. N. Kardovsky.

It was D. N. Kardovsky who impressed the young artist with unsurpassed skill and inculcated an idea of a drawing as a base for all artworks and as an independent genre. In other respects the Grigoriev’s opinions and aspirations differed from the academic art school. In 1909 he joined the Studio of impressionists, the group of young painters, who were close to futurists in their art. Grigoriev made friends with D. D. Burlyuk and V. V. Khlebnikov. He often visited the association Treugolnik (“Triangle”) under the guidance of N. I. Kulbin.

In 1909–1913 Grigoriev traveled a lot and lived in Europe (in Paris, Austria, Scandinavia). In 1913 he became a member of the society Mir Iskusstva (“World of Art”). His works were often exposed at the exhibitions of the society, in particular a big series of Paris drawings Intimacy, which depicted types of non-gala Paris.

Concierges, clowns and garçons inspired Grigoriev to create several thousands of drawings, to improve his skills and to draw by intuitive sense. The series Intimacy brought fame and favorable criticism to the artist.

Since 1911 Boris Grigoriev published his drawings in the magazines Satirikon, Noviy Satirikon (“New Satirikon”), designed the Russian folklore. In 1915–1916 Grigoriev together with A. E. Yakovlev and S. Y. Sudeikin painted the interiors of the literary and artistic cabaret theatre Comedian’s Halt (“Prival Komediantov”). At that time Grigoriev formed his own recognizable manner of painting. Fine and flexible lines as dominants of forms were characteristic for his works. Grigoriev began to paint portraits depicting a man in a role, or histrionic portraits: portrait of V. E. Meyerhold (1916, the State Russian Museum, St. Petersburg), portrait of I. E. Repin (1915), N. K. Roerich (1917), B. M. Kustodiev (1917), M. V. Dobuzhinsky (1917), F. I. Shalyapin (1918) and others.

In spite of friendly attitude with futurists, Grigoriev avoided extreme forms of avant-garde movement. In 1918 he created his famous cycle Rasseja (Russia); the album was published with articles of P. E. Shchegolev, N. E. Radlov and Grigoriev in 1918. All drawings and paintings from this cycle were completed in outskirts of Petrograd and Olonets province. The artist tried to depict how artistic intellectuals from capital saw the post-revolutionary village: Old man from Olonets, Village, Old woman with cow, Girl with can.

In 1918 Grigoriev became a member of the 1st Professional union of artists in Petrograd, taught at the Stroganov School. In 1919 he secretly left Russia; he with his family rowed in a boat the Gulf of Finland. The artist settled in Berlin for the first time, and then in 1921 he moved to Paris. He traveled a lot. Since 1927 he lived in Cagnes-sur-Mer, near Nice, in the villa Borisella (title consisted of the combined names of the artist and his wife — Ella).

Grigoriev worked as a landscape painter and portraitist. He republished his cycle Rasseja (Russia) in Russian and in French (1921, 1922), and added new album Faces of Russia in French and in English (1923, 1924).

In 1926 Grigoriev painted portrait of M. Gorky, which is in the museum of the writer in Moscow now. The artist collaborated with the magazines Life, Rus, Russian Emigrant and others; he also created designs for books.

In 1928–1929 Grigoriev moved to the USA; he delivered lectures in the Academy of Arts in Santiago. However in 1930 the artist returned to France for new monumental project — the canvas Faces of the World, dedicated to the League of Nations. In 1932 this painting was bought by the government of Czechoslovakia.

At the end of his life Grigoriev worked as an illustrator. In 1931 he created cycles of drawings for Childhood by M Gorky, in 1932–1933 — for The Brothers Karamazov by F. M. Dostoyevsky (property of the artist’s family).

At the same time several personal exhibitions of Grigoriev were held in Paris, Milan, Prague, New York and Chicago. In 1936 he made a trip to Latin America.

Boris Grigoriev painted rich gallery of portraits of Russian intellectuals in emigration. His last self-portrait, which he had painted shortly before his death, could be undoubtedly referred to this cycle.