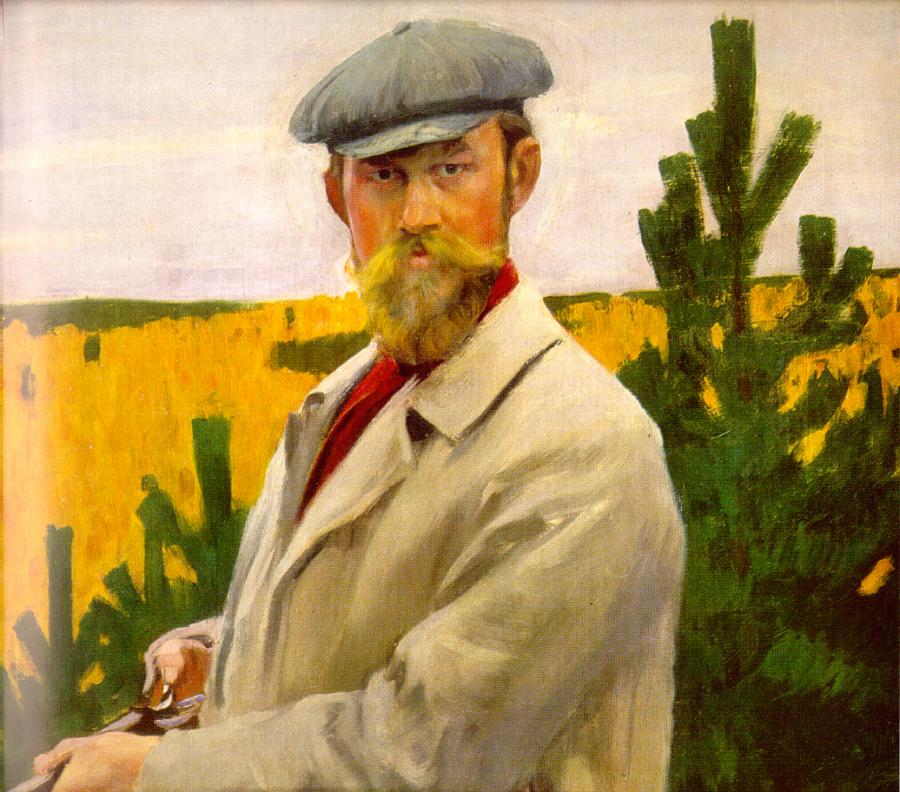 Boris Kustodiev was born to a family of teacher of Russian language and literature, who taught at the religious school and gymnasium in Astrakhan. In 1887–1892 Kustodiev studied icon painting in Astrakhan religious school, in 1892–1896 — in Astrakhan theological seminary. At the same time he took private lessons in drawing by P. A. Vlasov; he also attended Astrakhan circle of painting and drawing lovers.

In 1896 Kustodiev moved to St. Petersburg. During one month Kustodiev attended the studio of academician L. E. Dmitriev-Kavkazsky. In the same year he entered the Higher Art Institute of Painting, Sculpture and Architecture (VKhU) under the Imperial Academy of Arts (IAKh). Kustodiev studied under the guidance of V. E. Savinsky and I. I. Tvorozhnikov, since 1898 — in the studio of I. E. Repin. In 1900–1903 he was awarded personal grant of Nicholas II of Russia. Every year Kustodiev travelled to the Caucasus, the Crimea and Volga region for creative work.

In 1901–1903 Kustodiev together with I. S. Kulikov assisted I. E. Repin in painting the picture The ceremonial meeting of the State Council on the 7th of May in 1901, on the day of the 100th anniversary of its establishment. In 1903 the artist was awarded gold medal of the IAKh for the painting Market in Village; he graduated from the Academy with the title of class artist. He was also awarded the pensioner’s trip abroad. In 1904 Kustodiev visited Spain and France as a pensioner of the IAKh, studied in the studio of René Ménard in Paris. In the same year the painter became one of the founders of the New Society of Artists in St. Petersburg. In 1907 Kustodiev joined the Union of Russian Artists (SRKh); in 1910 he became a member of the reborn group Mir Iskusstva (“World of Art”).

Kustodiev worked a lot in book and magazine graphic art. In 1905–1906 the artist worked for the Zhupel (“Bugbear”) and Adskaya Pochta (“Hellish Mail”) magazines; he also took part in work on the edition Calendar of Russian Revolution.

In 1906–1907 works by Kustodiev were shown at the exhibitions of Russian art organized by S. P. Dyagilev in Paris and in Berlin. In 1907 Kustodiev was awarded big gold medal for the portrait of V. V. Mate at the art exhibition in Venice. In 1909 the painter was elected academician, in 1912 — member of the Council of the IAKh. Kustodiev was occasionally engaged in teaching, in particular in 1910 he gave lessons in painting in the E. S. Zarudnaya-Kavos School of painting and drawing, in 1913 — in the New Art workshop. In 1913 he was invited by A. V. Shchusev to design of the Kazansky railway station in Moscow, in particular he drew sketches of decorative panels and plafond for the restaurant (not realized).

Since 1911 Kustodiev worked as a scene-designer. He collaborated with the private K. N. Nezlobin’s Theatre and the Studio of Moscow Art Theatre (MKhT), created scene and costume design for the performances The Ardent Heart by A. N. Ostrovsky (1911), The Death of Pazukhin by M. E. Saltykov-Shchedrin.

Kustodiev often travelled through Russia and Europe. In 1900–1915 the artist worked in the village of Semenovskoye in Kostroma province. In 1911–1912 Kustodiev left Russia in order to receive treatment in Switzerland (Leysin). Since 1916 the artist experienced severe difficulties in creative work because of paralysis of the lower half of the body; however he did not leave painting.

After the revolution of 1917, Kustodiev took part in agitation design for celebrations in Petrograd. In 1920 the first personal exhibition of the artist was held in Petrograd House of Arts. In 1920 Kustodiev created scene and costume design for the play The Storm by A. N. Ostrovsky in the Second studio of Moscow Art Theatre (MKhAT); in 1925–1926 he created scene design for the production The Flea by E. I. Zamyatin in the Bolshoi Drama Theatre.

Boris Kustodiev is an outstanding Russian artist of the first third of the 20th century. A. N. Benois noticed that “real Kustodiev’s art is always Russian fair, motley kaleidoscope, bright chintz, barbarous fight of colours, and Russian village with its accordions, gingerbreads, dressed up peasant girls and dashing boys”. Actually, the subjects of the most characteristic and famous paintings by the artist were fairs, city and country celebrations, taverns, merchant women, whom Kustodiev depicted with some good humour. In these paintings reality was closely interwoven with imagination. The artist’s genre works are characterized by monumentality, ornamentality, deliberate bright colours and even crudeness of colour combinations. Kustodiev did not leave this manner of painting after revolution; he varied many motifs from early works in his late ones. His portraits, on the contrary, were painted in another style characterized by fine restrained colours. Kustodiev had a reputation of talented master of drawing with excellent drawing skills. The best artist’s drawings were often created in one breath.

Works by Boris Kustodiev are in many museum and private collections, including the State Tretyakov Gallery, the State Russian Museum, the Pushkin State Museum of Fine Arts, Nizhny Novgorod State Art Museum, Kiev Museum of Russian Art and others.