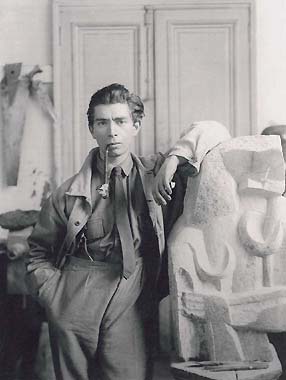 Ossip Zadkine was born to a family of professor of ancient languages, who taught at Smolensk seminary. His mother was a descendant of Scottish shipbuilders, who lived in Russia at the time of Peter the First.

Zadkine studied at the handcrafts school in Vitebsk, took lessons in drawing under Yehuda Pen. In 1905 Zadkine and his father left Russia for Sunderland in the North of England, where he started to study English language. A year later he moved to London, where he attended evening courses at the Polytechnic school. Later Zadkine learned woodcarving at the School of arts and handicrafts. He worked as a wood and stone carver; studied classical sculpture at the British Museum. In 1908 he spent some time in Russia.

In 1909 Zadkine moved to Paris, and settled in the artist’s residence La Ruche (“Beehive”) in Montparnasse Quarter. He attended the School of Fine Arts (L’École Nationale des Beaux-Arts) in Paris for some months. In 1911 Zadkine exhibited his sculptures and drawings at the Autumn Salon and the Salon of Independents. In 1912–1914 he often visited the Salon of Baroness d’Ettingen and the café La Rotonde, where he met a lot of important figures of Paris art milieu: Guillaume Apollinaire, Blaise Cendrars, Max Jacob, Pablo Picasso, Amedeo Modigliani, Constantin Brancusi, Emile Antoine Bourdelle, Léopold Survage, Aleksander Archipenko, Jacques Lipchitz, Ilya Ehrenburg and Vera Inber. In 1914 Zadkine designed the book Le Vine Triste (“Sad Wine”)by Vera Inber.

In 1912 Zadkine sent his works to the First exhibition of the Artistic Association in St. Petersburg; V. V. Mayakovsky, D. D. Burlyuk, El Lissitzky also participated in this exhibition. In 1914 he exposed his works at the New Secession in Berlin.

In 1915 Zadkine served as a volunteer in the French army, worked as a stretcher-bearer at a field hospital. On the front he drew a series of watercolors and drawings depicting war. In 1917 he was demobilized because of gas poisoning. He created a series of eau-fortes based on his war sketches. Soon he returned to sculpture: created a number of works in cubism and primitivism styles, which were later shown at the joint exhibition with Amedeo Modigliani and Moise Kisling in 1918. In 1920 the first personal exhibition of the artist was held in the artist’s studio in Rousselet Street (45 sculptures, 60 watercolors and gouaches).  In the same year Zadkine married the artist Valentine Prax. The first monograph about the artist was written by the well-known art critic Maurice Raynal and published in 1921. The personal exhibitions of Zadkine were held in Tokyo, Grenoble; big retrospective exhibitions were organized in Paris (1926) and London (1928).

In 1923–1925 Zadkine made several trips to Italy. In 1929 Andre De Ridder published another monograph on Zadkine’s art. In 1930 the exhibition of gouaches was held in the Arts Club of Chicago. In 1933–1937 the exhibitions of artist’s works were organized in Chicago, Paris, Brussels, Antwerp and New York.

In 1934 Zadkine bought a large house in Les Arques, in the Lot, where he worked in the summertime.

In 1935 the Parisian authorities bought monumental wooden statue Orphée by Zadkine. In 1937 he voyaged to the USA for the first time. In 1941 he fled to New York in the face of danger of concentration camp. In New York Zadkine continued to create art and to teach in different institutions. In 1945 he returned to France. Zadkine was elected professor of the Academy de la Grande Chaumière, where he taught untill 1958. In 1950–1951 Zadkine founded the school of sculpture in Paris, where he had a lot of students from America.

In 1948–1950 the personal exhibitions of the artist were held in the Stedelijk Museum in Amsterdam, the Museum Boijmans van Beuningen in Rotterdam, and the National Museum of Modern Art in Paris. Zadkine was awarded the Grand Prix at the Venice Biennale. In 1953 he represented the six-meter-high monument La Ville Detruite (“The Destroyed City”) in Rotterdam, which he had been working on since 1945. In 1962 the artist’s tapestries were shown at the exhibition in the gallery Lacloche in Paris.

In 1960 Zadkine was awarded the National Art Prize (Le Grand Prix National des Arts), in 1966 — the order of the Legion of Honour.

Zadkine died on the 25 of November in 1967 in a Parisian hospital. He was buried in the Montparnasse cemetery.

Ossip Zadkine created his sculptures without any mould; he did life-size sculpture at the beginning of work. His early works were characterized by primitive art, which a lot of artists of Paris school were interested in. In the late 1910s and in 1920s Zadkine took an interest in cubism. He did not belong to any art association and was not associated with any particular movement; he successfully combined elements of cubism, expressionism, surrealism with different historical styles in his works. The artist used various materials, often in combinations: marble and limestone, wood and nacre, alabaster and crystal glass. He preferred chiseling to moulding. In his late works Zadkine was close to classicism; he created sculptures based on antique mythology (Laocoön, Maenads, Diana, Narcissus, Prometheus etc.).

Sculptures by Ossip Zadkine adorn the streets and squares of Antwerp, Brussels, Amsterdam, Bordeaux, Marseilles, Paris, Bochum, Cologne, and Jerusalem. Works by Zadkine are in many museum collections, including the Museum of Modern Art in Vienna, the Museums of Fine Arts in Antwerp, Charleroi, Grenoble, Lyons, Nancy, Strasbourg and Vichy, the Vatican Pinacoteca, the Rijksmuseum and the Stedelijk Museum in Amsterdam, the Museum Boijmans van Beuningen in Rotterdam, the Pushkin State Museum of Fine Arts in Moscow, the Petit Palais Museum in Geneva, the Tate Gallery in London, the Museum of Modern Art in New York and others. The Zadkine Museum was opened in Paris in 1982.