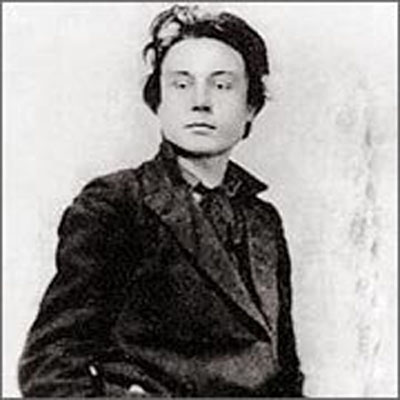 Born in a poor family of merchants, the artist's father owned a semi-artisan factory producing candles for special worship. In 1893 entered MUZhViZ on scenic department, studied with AE Arkhipov, NA Kasatkin, Leonid Pasternak, I. Levitan then in the workshop by Valentin Serov and Konstantin Korovin. He was a circle of artists led by PV Kuznetsov. In 1899/1900 a picture and in 1900/1901 for the small picturesque sketch awarded silver medals. Participated in the 22-th exhibition of pupils MUZhViZ, as well as the 28 th exhibition TPHV, where there is a landscape "Winter" (now located in the State Tretyakov Gallery).

In 1900-1901 worked as an assistant painter decorator MAT VA Sims. At the invitation of Sergei Diaghilev took part in the exhibition "World of Art in St. Petersburg.

In the early 1900's met Mamontov, regularly visited his studio in Butyrki in Moscow. In the season of 1902-1903 created the scenery for performances of opera Mamontov non-repertory theater in the Hermitage, designed the performances of the Camorra "M. Esposito," Orpheus "KV Gluck," Hansel and Gretel "E. ; Gumperdinka.

In 1902, together with Kuznetsov executed scenery for the play "Valkyrie" by Richard Wagner at the Bolshoi Theater in Moscow. In the same year made a trip to Italy, visited Rome, Florence, Pisa, Venice.

In 1904, together with like-minded on MUZhViZ took part in the exhibition "Scarlet Rose" set up in Saratov. Collaborated with the magazine "Balance". He graduated with the rank MUZhViZ neklassnogo artist continued his studies at the Higher Art School of Painting, Sculpture and Architecture at the St. Petersburg Academy of Arts in studio landscape AA Kiselev.

In 1905 a group of artists "Scarlet Rose" was exhibited at the 12 th exhibition of the Moscow Association of Artists. He took part in decorating the interior has just arisen at the Moscow Art Theater Studio of the pilot Povarskaya street. Since this work began a fruitful collaboration with Sapunova Meyerhold. In the same year, the artist created sketches of the scenery of the fourth and fifth acts of the first performance Studios "Death Tentazhilya" M. Maeterlinck. Then, in collaboration with Meyerhold participated in the implementation of productions of plays "Hedda Gabler" H. Ibsen and "Puppet Show" Blok in Theater Komissarzhevskaya in St. Petersburg.

addition to the theater a lot of work in the field of book and magazine graphics, collaborated with the magazines "Libra" (fully decorated the number 12 for 1905) and "Golden Fleece, created sketches drop caps, savers, and endings.

In 1907 took part in the exhibition "Blue Rose" in Moscow. In the same year became one of the founding members of the association "Free aesthetics. From 1908 to 1910 - and a permanent member of the exponents of the Union of Russian Artists ". In 1910 he became a member of the revived "World of Art».

In 1908 he performed sketches of scenery for the play Chekhov's Uncle Vanya "for Aleksandrinsky Theater in St. Petersburg. In 1909, together with the director F. Komissargevskaya worked on the staging of the play Shaw's "Caesar and Cleopatra" for the New Drama Theater in St. Petersburg. In 1910, together with Meyerhold, M. Kuzmin, S. Yu Sudeikin became a founder and an active figure in the House of Interludes, where, together with Meyerhold staged pantomime "Scarf of Columbine" by A. Schnitzler and "Dutchwoman Lisa" by pastoral Kuzmina. Achieved on sketches Golovine scenery for the ballet Stravinsky's "Firebird" for the first season of Diaghilev's Russian ballet in Paris. In 1911, created the costumes and scenery for the comedy-ballet "Le Bourgeois nobleman" Jean-Baptiste Moliere's play-tale "Princess Turandot" Gozzi for the Theater KN Nezlobin in Moscow .

In 1912 painted the interior of the cabaret "Stray Dog". Worked closely with the theater troupe in Terioki near St. Petersburg, which planned to organize a grand carnival evening entitled "The Merry night on the shore of the Gulf of Finland. However, his plans have been realized. June 14 of that year Sapunov drowned in Terioki while walking on a boat on the Gulf of Finland.

Sapunov - one of the brightest representatives of Russian Symbolism in the early twentieth century. His early works are similar aesthetic principles of the World of Art ". Simultaneously, his work formed the features of symbolist aesthetics, as embodied in works created between 1904 and 1907 years, in the exhibitions "Scarlet" and "Blue Rose". In the mature works gravitated toward neo-primitivism. Many of the later (1910-1912) of the wizard permeated the tragic vision, a premonition of the coming destruction, which Sapunova have foretold gypsy during his Italian travels. These are the "Still Life with Self-Portrait", "Danse Macabre", which are a kind of software works by the artist.

brilliant painter and draftsman Sapunov proved himself as a distinguished theatrical designer. Moreover, interest in theater set design was not limited to: some theatricalization images characteristic of many of his easel paintings.